Brian Lavallée
Senior Director, Solutions Marketing
Subscribe Subscribe to Ciena's communications
Africa has surpassed other continents in international bandwidth growth for the past four years fostering new submarine cable builds. Although increasing international capacity is critical to Africa, it’s also important to move data to and from Africa as fast as possible via low-latency network designs. This is why leading African service providers, like Angola Cables, offers a broad low-latency service portfolio.
Connecting to Africa with Low-Latency Services

As discussed in my recent Enabling the African Digital Economy blog, Africa is home to 1.4 billion of the youngest people on Earth who understandably hunger for the latest content. And where’s this coveted content geographically located? In data centers that are near, far, and very far away (overseas) from end-users, humans and machines. For an acceptable Quality of Experience (QoE) for end-users, both humans and machines, network performance must reliably deliver scalable capacity and the level of low latency required by the specific use-cases. In short, latency is as important as capacity.

Who cares about latency, and why?

ICPs, who are lighting most new network bandwidth and building many new submarine cables, covet low-latency end-to-end (E2E) performance to interconnect their data centers and better achieve search index synchronization, distribution of video content nearer to viewers, multimedia calling/conferencing, and machine learning and AI to optimize cloud services. New submarine cable routes not only provide much needed increased resiliency with improved route diversity, but often shorter paths between endpoints, which in the case of ICPs, is between their ecosystem of interconnected data center assets.

How low can, or more importantly, do we need to go, in terms of E2E network latency? In general, the lower the better for most cases but as we get lower and lower, special “tricks” and architectures are required, which often lead to higher pricing for ultra-low-latency services. This explains why not all network operators provide the same latency, since not only are routes and distances different for each submarine cable, but terrestrial backhaul networks at each end of a submarine cable and intra data center networks are also different. E2E network latency is cumulative so everything along an E2E service path must be considered.

Ciena’s tagline for GeoMesh Extreme is “Land. Sea. Cloud. Network Unite.”, which alludes to the global internet backbone network that we all know, love, and depend on in our daily personal and business lives. GeoMesh comes from where “Geo” meaning Earth and Mesh referring to the interconnected “mesh” of submarine, terrestrial, and data center networks, where are accessed content is hosted. GeoMesh Extreme significantly simplifies E2E network designs, overland and undersea, to provide a broad set of enabled benefits such as reduced complexity, power, space, and you likely guessed it, reduced overall latency.

Angola Cables, faster connectivity to and from Africa 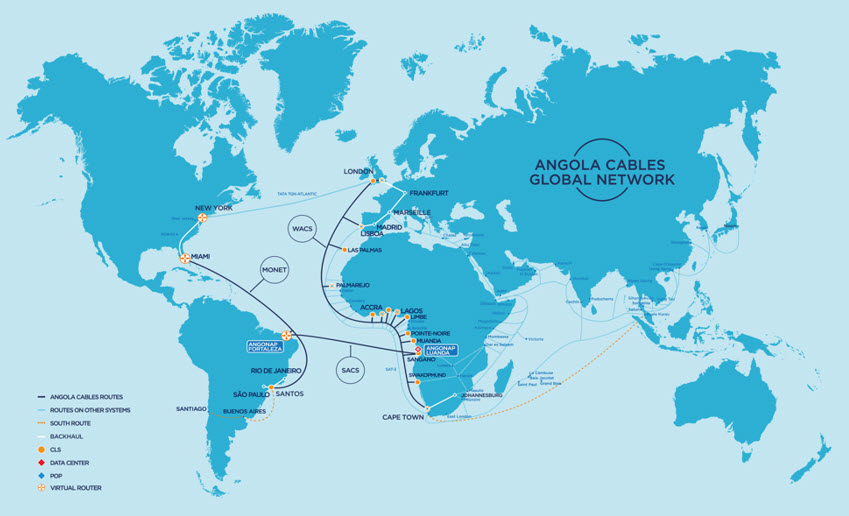 For transoceanic network services, the submarine cable contributes most of the end-to-end latency due to its routed distance of several thousands of kilometers. As light in an optical fiber contributes roughly 5 milliseconds per 1,000 kilometers, latency on a submarine cable adds up quickly. This makes the selected route for a new submarine cable critical when designing low-latency networks, since once its laid upon the seabed, its latency is essentially fixed over its lifespan, typically 25 years or more. Angola Cables has taken this into account when offering a broad range of low-latency services between popular endpoints, as shown in Figure 2, connecting Africa to Europe, South America, North America, and to others points in Africa.

Angola Cables understands the importance of a broad and vibrant ecosystem of submarine networks, terrestrial networks, and data center assets. Subsequently, they’ve created an impressive ecosystem of assets and international partners, as shown in Figure 3, to better serve their diverse suite of customers. 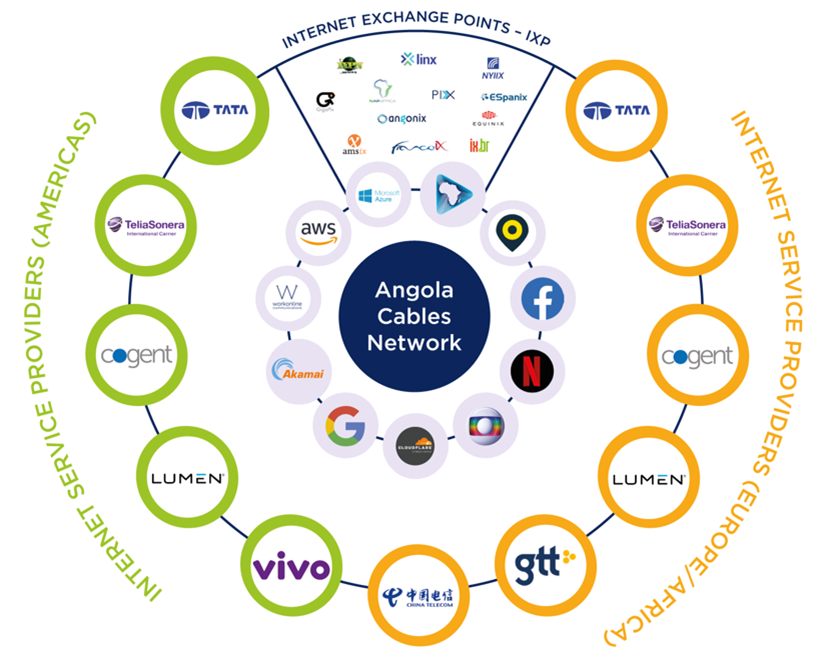 Angola is a country in Central Africa that’s rich in natural resources. With network operators like Angola Cables, it’s also richer in one of the most important resources of the 21st century – network bandwidth.

Connecting to Africa with Low-Latency Services

Looking back at the 2021 network seascape