Within a two week period in late November, Ciena CTO Steve Alexander (bio) received the good news that he had been chosen as the 2012 recipient of the IEEE Communications Society’s (COMSOC) prestigious Industrial Innovation Award, and that he had been elevated to the position of Fellow of the IEEE. The citation for the COMSOC award was “for innovative industry contributions to optical communications technologies, systems and architectures,” with a similar citation for the IEEE Fellow award. The presentation of the Industrial Innovation Award took place during the awards luncheon at GLOBECOM 2012 on December 4, and the IEEE Fellow Award will be presented at OFC/NFOEC 2013 this coming March.

In the below guest post, Joe Berthold, Steve’s long-time friend and colleague and Ciena’s VP of Network Architecture, gives his first-hand account of the tremendous influence that Steve Alexander has had on the optical industry and the broader world of communications.

I have known Steve for more than 20 years, beginning when he was at MIT Lincoln Laboratories and I was at Bellcore. We both worked on an early DARPA sponsored research program on optical networking. Steve left MIT in 1994 to join Ciena as an early employee, while I continued DARPA funded research. In 1997 I joined Ciena and was privileged to witness at first hand the DWDM networking revolution and its impact on our company, the communications industry and society. I am writing this post to share my recollections and perspective of that period, and also to describe Steve’s earlier contributions that are recognized in these two awards.

Podcast
Episode 17: 5G, AI, DCI and Blockchain. What will be their impact on the network in 2019? 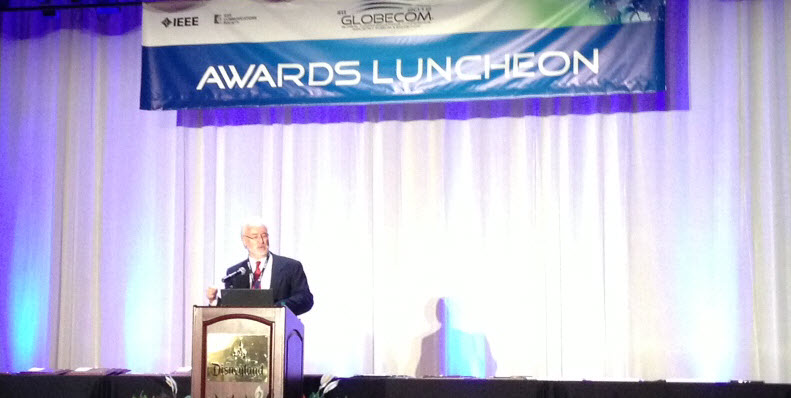 Steve’s major accomplishment that forms the basis of these awards is his pioneering work in the commercial introduction of Dense Wavelength Division Multiplexed (DWDM) optical networking systems into communications networks. DWDM systems now form the basis of all high capacity optical fiber systems in metro, regional and long-distance networks around the world. This innovation, and the rapid expansion of capabilities he introduced in the three years following Ciena’s initial product introduction provided a multiplication of the capacity of commercial optical fiber transmission systems by two orders of magnitude, while dramatically reducing transmission cost. Besides cost and capacity improvements, his system architectural innovations created a new category of networking product, the open DWDM optical networking system, which simplified networks and contributed to the explosive growth of the Internet in the late 1990s and continue as its foundation today.

The Pioneering of DWDM Technology

Since DWDM systems are such a fundamental element in today’s global networks, it is hard to imagine the world before their introduction. Looking back it is also tempting to think that the systems we have today were obvious, and nothing else could have evolved, once laser wavelengths could be stabilized and the optical amplifier was invented. To use an analogy from more recent history, that would be akin to believing the iPhone was obvious and nothing else could have evolved once processor power, battery technology, and displays developed to the point they reached in 2007. We all know how useful (or should I say useless) earlier smartphones were! Just as the iPhone was more than a collection of advanced technology components – but a critical element of a revolutionary system – Ciena’s systems were revolutionary not only in a technology sense but also in a systems sense, and Steve’s contributions to their success were fundamental. 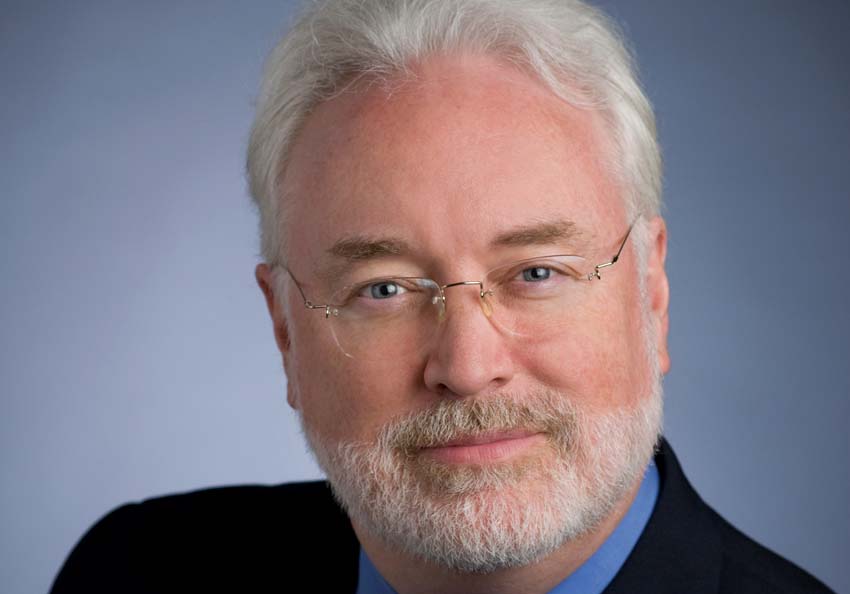 The promise of wavelength division multiplexing (WDM) to increase optical fiber information carrying capacity was well known for a long time, and the invention of the optical amplifier in the late 1980s made it theoretically possible to amplify multiple optical channels in a single device without wavelength separation and electronic regeneration. At that time, optical transmission systems required electronic regeneration of each signal at intervals of several 10s of miles, so optically amplified DWDM systems offered great cost reduction potential.

Previous commercial attempts to exploit the promise of WDM and optical amplification were not sophisticated systems but crude assemblies of optoelectronic components combining 2 or 4 WDM signals together, coupled with optical amplifiers that required manual adjustment and tuning for each wavelength addition. They saw limited commercial success due to poor reliability and the heavy maintenance required. Later, major suppliers of telecommunications transmission equipment were engaged in the development of WDM interfaces for their SONET add/drop multiplexers, initially targeting support for 4 WDM channels. The 16-channel DWDM system that Steve designed, and Ciena commercially introduced in early 1996, was the first of its kind and instantly set the benchmark for performance, ease of use, and reliability.

The Early Days at Ciena

While Ciena was first incorporated 20 years ago, it was not until early 1994 that the product focus was chosen, the leadership team pulled together, and early funding secured. Steve joined in October of 1994, as employee number 15. In two short years, a very small team of extremely talented individuals created the world’s first commercial DWDM system, the MultiWave 1600.

Steve alone was responsible for the optical system design, including the choice of the optical multiplexing and de-multiplexing technology, optical amplifier designs, and the optical span designs. He, along with several co-inventors, obtained a number of fundamental system patents. He is also the inventor of a critical dual-stage optical amplifier patent that paved the way for higher channel counts and longer transmission distances, essential elements to the economic success of DWDM systems. It is truly remarkable what such a small team, without the support structure and large teams of researchers and system developers enjoyed by the dominant systems companies of the time, were able to accomplish in such a short time. 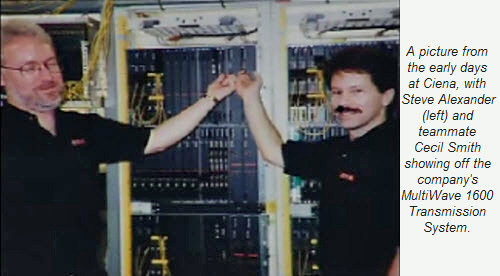 The commercial success of MultiWave 1600 led to Ciena’s initial public offering (IPO) in February of 1997. Ciena’s IPO resulted in a first-day market capitalization that was the largest to that date for a venture-funded startup company. It was said that the success of MultiWave 1600 and Ciena “introduced Photonics to Wall-Street.” This success led to a surge of interest in the investment banking and venture capital community that led to the funding of a large number of component and systems companies in optical communications, as well as a number of new competitive network operators who were quick to adopt DWDM technology. This enormous investment greatly accelerated the availability of high capacity communications to society, which has had far-reaching implications.

Following on the success of MultiWave 1600, Steve introduced a number of architectural innovations. The first was the development of an optical add/drop multiplexer (OADM), introduced in 1997. The OADM allowed the extraction and insertion of a small number of optical channels at an intermediate amplifier location, providing an even lower cost option for data access at smaller network locations.

With the MultiWave Sentry product introduced in 1998, DWDM systems gained the ability to do digital performance management, opening the door to wavelength services offerings and creating DWDM systems as stand-alone optical networking platforms. Previously DWDM systems would be paired with SONET/SDH add/drop multiplexers to gain a richer set of management features.

The MultiWave Sentry enabled the direct connection of data switches and routers with DWDM transmission systems, greatly simplifying the network and reducing costs, leading to an acceleration of the growth of the Internet. The full electrical regeneration that Sentry offered, along with the fault localization enabled by digital performance monitoring, allowed the cascade of DWDM systems to deliver optical channels over arbitrarily long distances. 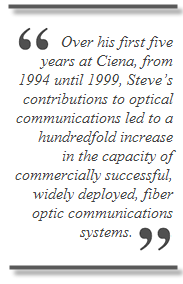 Steve continued to push for increased DWDM system capacity with the introduction of MultiWave 4000, a 40 channel DWDM system in 1998. He also led the design team that formulated the initial design of CoreStream, a 96-channel DWDM system introduced in 1999. In 1999 his team also introduced 10 Gbit/sec channel support, increasing system capacity by another factor of 4. Over his first 5 years at Ciena, from 1994 until 1999, Steve’s contributions to optical communications led to a hundredfold increase in the capacity of commercially successful, widely deployed, fiber optic communications systems.

The most impactful aspect of Steve’s product from an architectural viewpoint was that it was the first transceiver-based DWDM networking system, the first wavelength-level networking platform. Separation of DWDM transmission from telecommunications multiplexing systems opened the possibility of simplifying networks by allowing data switches and routers to be directly connected across long haul networks without expensive and unnecessary intervening SONET multiplexing equipment. Beginning in 1998, when 2.5 Gbit/sec optical interface ports first became available on IP routers and ATM switches, Internet backbone architectures largely evolved from links interconnected by SONET rings to systems whose links were supported directly by DWDM optical networking systems. This system innovation deserves a great deal of credit in enabling the explosive growth of Internet bandwidth then and ever since, which has had a major impact on society. 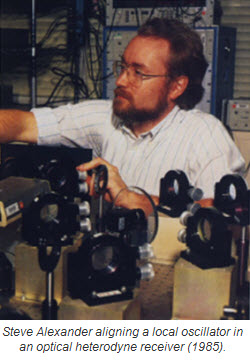 While the COMSOC Industrial Innovation Award recognized Steve’s pioneering work in the commercial introduction of DWDM networking systems, his Fellow Award additionally recognized groundbreaking work while he was at MIT Lincoln Laboratories, working under Vincent Chan. Steve started working on Coherent Optical Communications in 1982 in the Satellite Communications group. He was instrumental in the construction of some of the first coherent optical communications systems including the characterization and equalization of direct injection-current frequency-modulation of semiconductor lasers, the development of practical optical balanced-mixer receivers, and the near-quantum-limited performance of Amplitude, Phase, and Frequency Shift -Keyed systems.

With the invention of the optical amplifier in the late 1980s, the emphasis on coherent technology for commercial applications waned, only to be revived much more recently in a DWDM system context, with the application of digital signal processing as an additional enabling technology. Now, 30 years after Steve’s fundamental work began, coherent optical technology is the primary platform for high capacity transmission systems.

He further developed coherent optical technology for networking applications during the early 1990s in one of the DARPA funded consortia on All-Optical Networks (AON) where he was responsible for the initial design of the optical terminals and the network test-bed developments*. The optical terminals and the associated AON test-bed were some of the first examples of a wide-area all-optical network that utilized a separate control plane for network configuration, along with slow tuning lasers for TDM services, and a frequency hopping coherent system using fast-tuning lasers to distribute Ethernet services.

These awards provide an opportunity for the professional engineering community to recognize both outstanding commercial innovations and a long career of technical contributions advancing the leading edge of optical communications technologies, systems, and architectures. I’m sure I speak not only for myself but also for so many others who have benefitted from a close association with Steve over his exceptionally productive career, in congratulating him for the recognition well deserved. 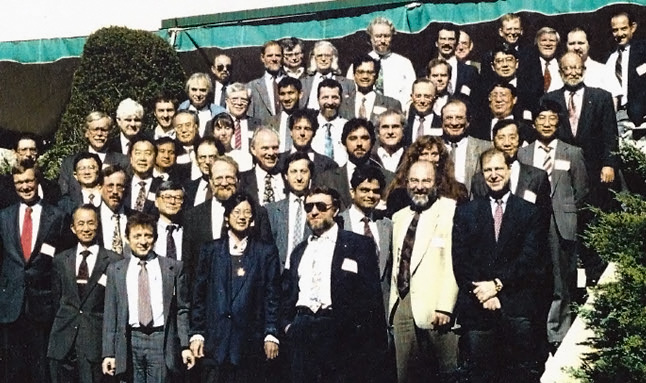 A picture from the DARPA WDM Network Workshop at MIT Endicott House in 1993. Included in the picture are Steve Alexander (top row, center, in the white shirt) and Joe Berthold (bottom row, second from the right in the yellow suit).

Podcast
Episode 17: 5G, AI, DCI and Blockchain. What will be their impact on the network in 2019?