Bo Gowan
Director, Social Media
Subscribe Subscribe to Ciena's communications
The age of SONET and SDH networks is nearing an end, for real this time. In the latest reports from Infonetics and Dell’Oro, both analyst firms noted a dramatic 30% drop in carrier spending for SONET/SDH networks

The age of SONET and SDH networks is nearing an end.  No really, this time it’s true.  I understand why you’d be skeptical.  You’ve probably heard predictions of the demise of good old reliable SONET/SDH networks for a decade now. Light Reading wrote an article titled "SONET’s even more dead" way back in 2003 and Lightwave has this post from 2009: SONET/SDH eclipses WDN in the metro, but for how long.

How do I know that this time it is for real?  Simple…follow the money.

In the latest reports from Infonetics and Dell’Oro, both analyst firms noted a dramatic 30% drop in carrier spending for SONET/SDH networks, a decline that was much more sudden and steep than many expected. The shift led Infonetics to conclude that SONET/SDH has been “essentially dealt a death blow.”

At the same time, spending has grown rapidly for next-gen packet-optical gear.  Dell’Oro’s latest report on that subsegment highlights a 23% surge in the first quarter of 2013, with a $4.6 billion total market for the trailing four quarters.  This strong growth underscores the tipping point that has finally been reached with network operators on the diminished value of maintaining aging legacy networks.

It is clear that while packet-optical systems and technologies like WDM and OTN have been the talk of the industry for many years – and for good reason – much of the total optical spend by network operators has traditionally been directed to the massive SONET/SDH infrastructure that still today resides inside most service provider networks.

In fact, IDC estimates that over 90% of networks still have legacy SONET/SDH equipment. On average, that equipment is more than 15 years old and was sourced from at least three different vendors – mostly the result of the boom in equipment spending that occurred in the 1990s. 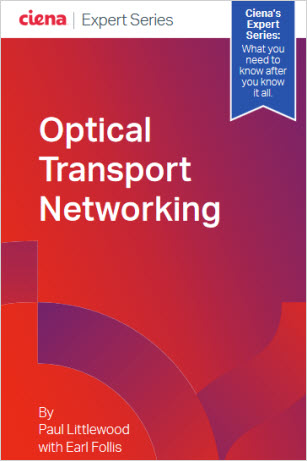 So why after over a decade of talk about the demise of legacy SONET and SDH networks are we finally seeing a jaw-dropping 30% plunge in spending?  One obvious answer seems to be the boom in 100G spending as it ramps into the de facto transport speed for both metro and long-haul networks.  As has been highlighted on this blog before, SONET/SDH maxes out at 40G speeds, creating a massive industry shift to OTN as the transport protocol of choice as networks upgrade to 100G.  This is all part of what Infonetics analyst Andrew Schmitt has been calling "The Optical Reboot" for two years now.

But the move to 100G is not the sole reason for the sudden shift.  Once again, the answer lies in following the money – but this time it’s the money network operators are spending at an increasing rate to maintain their SONET/SDH networks.

Much of the legacy SONET/SDH equipment in carrier networks today has already reached or passed its end-of-life, creating mounting issues as failure rates for this equipment rises.  A perfect example of this phenomenon is Digital Cross Connect systems (DCS), network elements that were widely deployed in the 1990s and early 2000s.  As failure rates for DCS increase, spare circuit packs to replace failures are more difficult to acquire, causing many service providers to create costly “sufficiency pools” so they can maintain a stock of critical spares.

Legacy OPEX issues don’t only relate to increased failures and sparing costs.  Another real world case study involves a digital broadband cross-connect in a major North American metropolitan central office equipped with 1100 DS-3 ports and 20 shelves of adjacent SONET/SDH ADMs. The provider required a total of 52 bays to house this equipment in their central office, based on their internal floor space deployment guidelines. 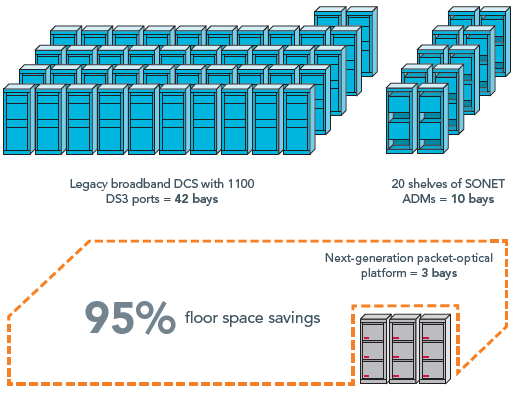 A proposal to replace this legacy equipment with a next generation packet-optical platform required only three bays of equipment, down from 52, saving the provider 95% of floor space. An analysis of the power consumption of the legacy DCS/SONET ADMs (52 bays) indicated a consumption of 54,800 watts. When this equipment was replaced with a next-generation packet-optical platform requiring three bays, the power consumption dropped to 5,123 watts—a 90% drop in power use.

Combined, this new momentum behind the decline of SONET/SDH seems to be the final and true death blow, and is the impetus behind the services that Ciena’s Network Transformation Solutions provides to help services providers modernize their network infrastructure.