IHS Infonetics has released the results from its annual Service Provider survey of Optical Equipment vendors, and as in years past, Ciena sits atop the leaderboard for many of the categories measured.

IHS also detailed some of the key results in a press release announcing the survey, which include:

Operator respondents perceive Ciena, Huawei, Alcatel-Lucent and Infinera as the overall leaders in the optical equipment space.  This is familiar territory for Ciena, as we've been tagged as the top optical vendor in this survey several times in the past.

Ciena was most cited by respondents as a leader in data center interconnect (DCI), one of the highest growth segments in the optical market. This is big news, and a bit of validation for our recent claims that we are winning with our data center interconnect strategy, and our targeting of new web-scale internet content providers (ICPs) specifically.

The top three rated vendors in Packet-Optical Transport Systems (P-OTS) were Ciena, Huawei, Alcatel-Lucent. P-OTS is a category that's been overshadowed by the hype around SDN/NFV lately, but is still seens by carriers as a key way to reduce the complexity of the network.

Ciena is most cited as the leader in product reliability, the second most important ranked purchase criterion. This is again a familiar position for Ciena from survey results in previous years. 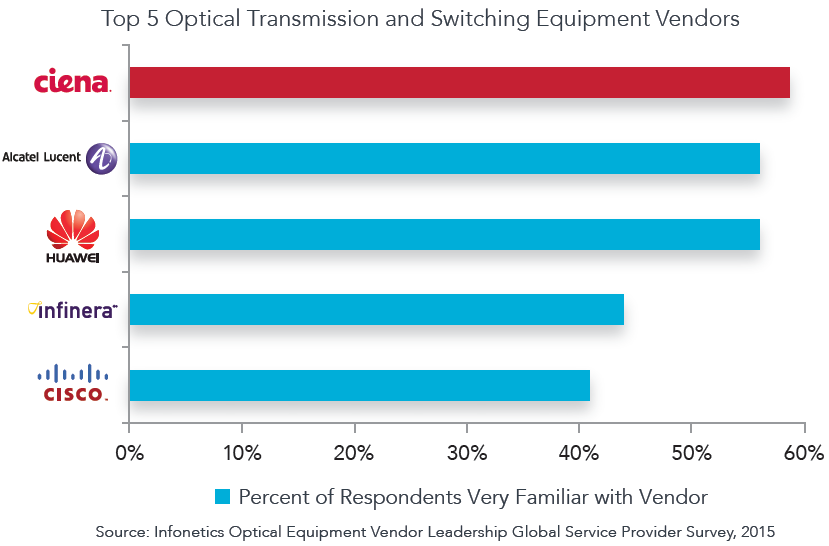 These survey results come on the heels of several other recent reports on Ciena's leadership, including the IHS Infonetics 2015 Optical Scorecard and our Vendor of the Year award from MEF GEN15.

You can download a Ciena excerpt of 2015 Infonetics Optical Scorecard here.