Look at any list of networking predictions for 2016 and some form of security topic is sure to be included. But unlike some hot topics for 2016, cybersecurity is more than hype. It’s a boardroom discussion and a potential PR and economic disaster if not done right. 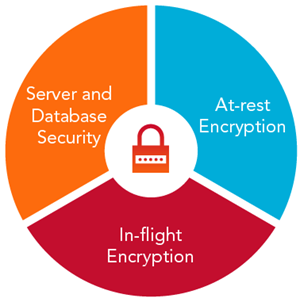 Organizations are re-visiting their security strategies to ensure that they are doing everything they can to protect their data. BYOD and IoT vulnerabilities, combined with cloud-based applications, make the old perimeter defense strategy no longer valid. And the escalating threat of data breaches, including the headlines of fiber cable intrusions and man-in-the-middle attacks, reinforces the need for robust in-flight data encryption. A ‘holistic data security strategy’ pulls together server/database security and at-rest encryption with in-flight data encryption as foundational elements.

Ciena has today unveiled WaveLogic Encryption, the industry’s first 100G/200G optical encryption solution. This builds on our years of experience in coherent optics as well as in transport-layer encryption, delivering a simple-to-implement, always-on encryption solution across all infrastructures, from metro to long-haul.  European service provider Telindus is already deploying Ciena’s WaveLogic Encryption solution for encrypted 200G links with a customer in the Dutch finance sector, and both Telindus and Telstra were quoted in today’s press release on the news.

Why now for in-flight encryption?

In-flight data encryption solutions aren’t new, so why aren’t they ubiquitous yet? Frankly, traditional encryption offerings have several challenges including: painful key management, increased latency, bandwidth inefficiency and the need for application-specific hardware, which adds to the complexity of managing the network. With more and more in-flight data now being carried over the network across 10G, 100G and 200G waves, optical encryption is an effective means of protecting high-capacity data as it crosses cities, countries and borders.

WaveLogic Encryption solves these challenges and moves encryption deployments from cumbersome to commonplace. WaveLogic Encryption is a FIPS-certified, wire-speed 100G/200G encryption solution that elegantly integrates with our cornerstone 6500 Packet-Optical Platform family.  It’s purpose-built to deliver an easy-to-deploy, protocol-agnostic, always-on encryption solution that protects all in-flight data, all of the time. Service providers can continue to offer differentiated encrypted services as they have in the past but now they can leverage a differentiated highly secure infrastructure. 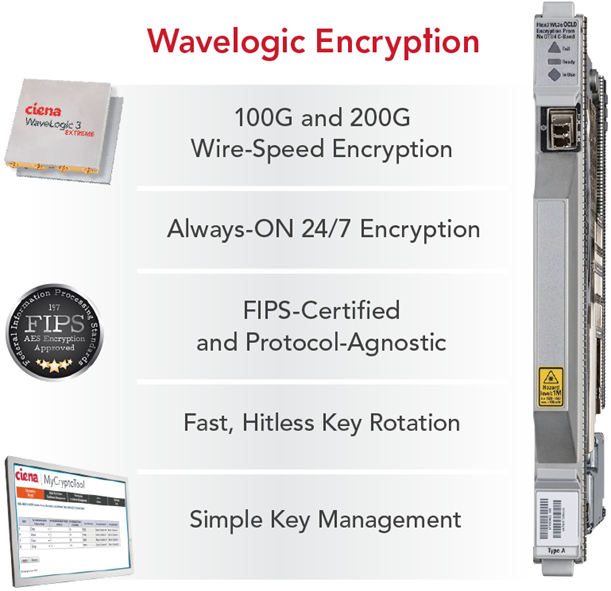 In addition to the PR and customer reputational damage that a cyber-attack brings, a panoply of new government regulations means significant fines and consequences for any organization facing a data breach that has not taken every preventive measure to protect customer data.

For key verticals like government, finance and healthcare, data encryption and cybersecurity is now a foundational business need.  As such, network operators and service providers have the opportunity to provide in-flight encryption as a value-add part of their connectivity services. According to the December 2015 report by Heavy Reading The Lower the Better: Encrypting the Optical Layer, more service providers will start to promote layer 1 encryption as encryption becomes more of a competitive chip to play for managed service providers competing for valued enterprise business.

Of course, any network service must be easy to deploy and scale for both the service provider and customer, and that hasn’t been a strength of traditional encryption solutions.  In fact, a recent survey on encryption and key management found that 56% of respondents said the process was severely painful.

This is where Ciena’s WaveLogic Encryption shines with its integrated software management tool. Designed to simplify encryption key management, MyCryptoTool is a dedicated interface for distributed, secure, end-user management. This enables the end-user/security officer to independently manage the security parameters and alarms of 10G, 100G or 200G encrypted services.

So why haven’t you added optical encryption to your data security strategy?

Encryption of in-flight data at the optical layer has significant advantages over traditional encryption solutions at higher layers of the network.  It’s highly secure, introduces less latency, is more bandwidth efficient and doesn’t require a separate network appliance.  With Ciena’s WaveLogic Encryption, the industry’s first to enable flexible 100G and 200G in-flight encryption, operators benefit from high-capacity encryption deployments across all infrastructures that are easier than ever to manage and to deploy.