Bo Gowan
Director, Social Media
Subscribe Subscribe to Ciena's communications
Ciena today unveiled Ciena 6500 T-Series, a new higher density version of our cornerstone 6500 Packet Optical Platform, providing up to a Terabit of switching capacity per slot and up to 24 Terabits in a single chassis.

Ciena today unveiled Ciena 6500 T-Series, a new higher density version of our cornerstone 6500 Packet Optical Platform, providing up to a Terabit of switching capacity per slot and up to 24 Terabits in a single chassis, all while retaining the agnostic packet/OTN switching, industry leading coherent optics and intelligent software capabilities that make Ciena 6500 an industry leader.

Verizon is already in the process of deploying Ciena’s 6500 T-Series as part of its next-gen metro 100G build-out across the United States. 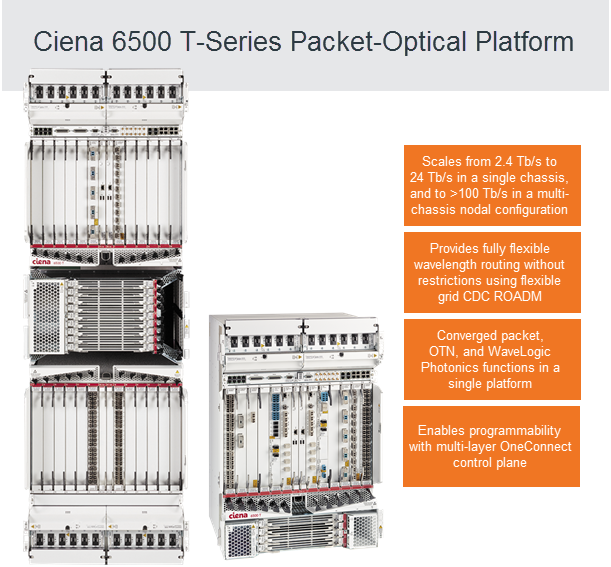 The half rack 12-slot version of the 6500 T-Series is available this month (Ciena 6500-T12 pictured above right), and will be featured on Ciena’s booth at OFC next week in Anaheim, California. A full rack 24-slot Ciena 6500-T24 shelf (pictured above left) will be available by the end of 2016.

Ciena’s 6500 T-Series is purpose-built for the Terabit world, offering significantly reduced power consumption and space requirements.  This combination of capacity and efficiency in size and power make the T-Series a perfect fit for metro and regional network applications where intelligent, high capacity packet-optical transport is needed.

"This announcement is a big deal,” said Andrew Schmitt, Founder and Lead Analyst at Cignal AI, as part of today’s announcement. “The 6500 T-Series extends on the success of the 6500 in the marketplace and simultaneously demonstrates Ciena’s leadership in both converged packet & OTN switching and photonics."

T-Series is the newest member of Ciena’s industry-leading 6500 Packet-Optical Platform family, which includes a variety of configurations and interfaces that support the full mix of Ethernet, OTN, SDH/SONET, Fibre Channel, video, and transparent DWDM services—from DS1/E1 to 100 GbE/OTU4—from metro to submarine applications.

Ciena’s 6500 counts more than 500 customers across 50 countries worldwide, with more than 65,000 nodes deployed, and Ciena has consistently ranked #1 in IHS/Infonetics’ Optical Vendor Leadership survey in the “Top Packet-Optical Supplier” category.