Why Packet/OTN Switching is making its way into metro enterprises

Traditionally, enterprise metro networks have relied on packet/OTN muxponder and DWDM optical technologies to aggregate and transport traffic to various locations within the metro. In the past, one would not have considered deploying a packet/OTN centralized switched infrastructure for this type of application, as centralized switching is often assumed to benefit larger networks with mesh connectivity often associated with core service provider networks. 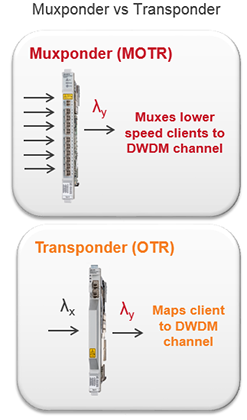 However, it turns out that there are some key advantages for metro enterprises that deploy a centralized switched fabric, even within a few closely spaced sites, without the typical mesh connectivity between these locations. In fact, today’s metro enterprises are deploying converged-packet optical platforms equipped with centralized switching fabrics to cost-effectively transport predominantly Ethernet traffic between core sites in a deterministic and highly-reliable manner without additional operational complexity.

Converged packet-optical platforms support both muxponder-based and central fabric-based packet/OTN switching solutions, enabling customized configurations that scale up or down as needed for specific connectivity requirements. Muxponder-based solutions are best suited for predictable point-to-point connectivity, or when the DWDM line system is being used for simple interconnection of switch or router devices. They are also useful at the network edge for multi-service and low-rate aggregation onto an OTN infrastructure.

A typical metro enterprise use case would be to initially deploy a couple of 100G waves over a centralized switched infrastructure between each of the main locations. There is no need for meshed fiber connectivity between sites as shown in figure 1. Instead, sites are interconnected in a ring-like fashion as shown in figure 2, each site being equipped with a centralized switching platform.

As every site is interconnected, the 200G of bandwidth (2 wavelengths of 100G) is shared between all the locations and is allocated on-demand as needed. This packet/OTN switched infrastructure offers the most efficient use of network resources by maximizing the fill of each wavelength with the ability to adjust the bandwidth required on a per-service basis.

Enterprises can select the appropriate packet/OTN interface to best match their service requirements. For example, Ciena’s 6500 converged packet-optical platform offers interfaces with flexible per-port, user-selectable packet or OTN switched services over a single wavelength, making it easy to adapt to changing network requirements. This provides the flexibility to choose the degree of packet and/or OTN switching based on the current demand and adjust this level as needed at any time using the same hardware. Additionally, increased service granularity is enabled with the ability to adjust each ODUFlex container in 1.25G increments to more efficiently match the packet service that is being transported.

A packet/OTN switched infrastructure also provides virtualized ports via high-capacity wavelengths for application separation without the need to dedicate a wavelength per application. Not only does this offering deliver full separation of various applications within 100G wavelengths but it guarantees that each application has its own dedicated network resources, including segregated packet queues. 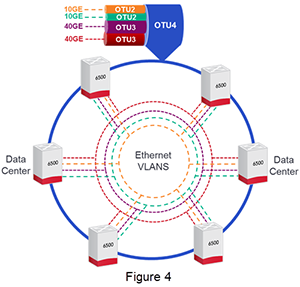 If we take a closer look at our metro enterprise example, one of the 100G wavelengths can be sliced as shown in Figure 4 – where all the core sites are interconnected via Ethernet VPNs enabling site-to-site content sharing as well as simultaneous access to both the primary and backup data centers.

When additional capacity is required in the future, a packet/OTN switched infrastructure makes it easy to increase the shared bandwidth available by adding 100G wavelengths as needed. Today, operators can leverage a full range of photonic architectures to add high-capacity wavelengths to their photonic network. For metro enterprises, a 2-way or 4-way ROADM supporting up to 44 DWDM channels is typically enough to meet bandwidth demands for several years to come. Additionally, because services are groomed at layers 1 and 2, the number of wavelengths required at the optical layer are reduced, preserving the DWDM channel count to accommodate future growth. This significantly improves network efficiency without over-building capacity day 1.

An important additional benefit of a packet/OTN switched infrastructure is that it future-proofs the network against new technology changes through the separation of the client from the line. This means that the infrastructure investments you make today will not become obsolete tomorrow. As new modulation schemes and line rates become available, you will be able to reuse client cards and ports as new line cards are deployed.

An important additional benefit of a packet/OTN switched infrastructure is that it future-proofs the network against new technology changes through the separation of the client from the line. This means that the infrastructure investments you make today will not become obsolete tomorrow.

For example, when line rates beyond 100G/200G are deployed, all the existing client resources and cards in the network can remain in place and the packet/OTN switch can migrate them to the new line interfaces as they are installed. This degree of flexibility is not available with transponder-based architectures – when a transponder is deployed, fiber patches must be made for the new line interfaces, as well as for all the client traffic. Similarly, as new client interfaces and rates are introduced, the existing line interfaces and ports can remain in place, and the centralized switch can groom the new client services into existing line ports. 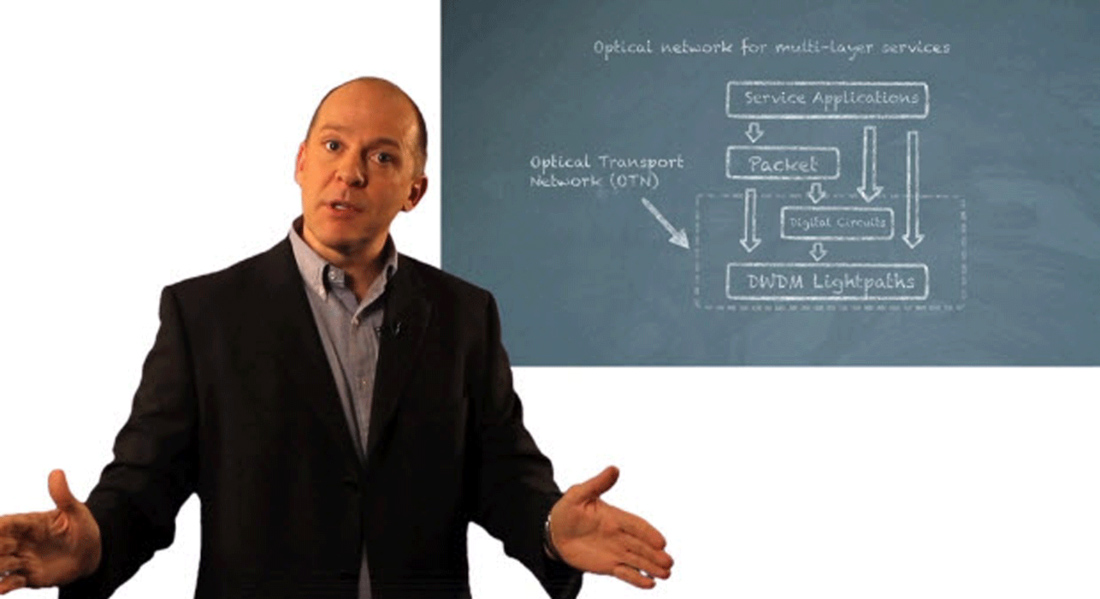 Autonomous Networks… Are You Ready?