As blogged about last year, the International Cable Protection Committee (ICPC) is an organizationformed 60 years ago with the primary goal of promoting the safeguarding of international submarine cables against manmade and natural hazards. This is accomplished by providing a forum to exchange technical, legal, and environmental information related to both submarine telecom and power cables.

Even though subsea cables carry “nearly 100% of the world’s intercontinental electronic communications traffic” for a daily transactional value of 100 trillion dollars, the cable itself is relatively modest. In water depths below two kilometers, which accounts for over 80% of our oceans, submarine telecom cables are about 20mm in diameter, which is about the size of a common garden hose. They’re composed of highly stable materials for a minimum design lifespan of 25 years. In shallow water, submarine cables are more robust with a diameter of about 50mm, due to the addition of steel wire armour.

This helps to protect them from the primary cause of cable damage and associated faults, which is human marine activities such as fishing and anchoring. For additional protection, cables are commonly buried several meters beneath the seabed using sea ploughs to minimize the chances of being snagged by an anchor dragged across the seabed. 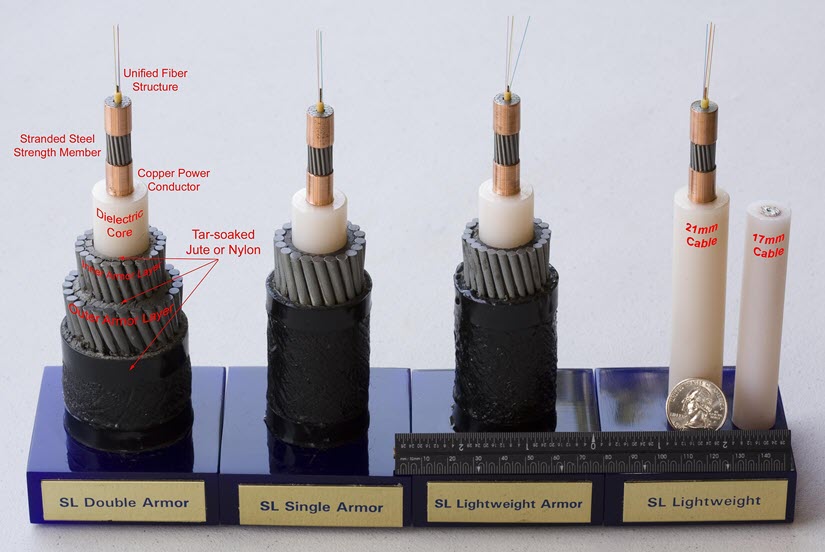 Although buried as they approach shorelines for increased protection, cables are simply laid upon deep ocean floors. In the dark recesses at the bottoms of the ocean, cable damage is uncommon amounting to a few faults each year compared to + 200 faults on the continental shelf where fishing and shipping abound.

To reduce marine activity-related risks, it’s critical to work with other seabed users by sharing information of one another’s operations. Other seabed users include those engaging in such activities as deep-sea mining and drilling.

Three events in Southeast Asia off the coasts of Taiwan and Japan resulted in 15 to 22 cable breaks!

Natural hazards such as undersea earthquakes that set off submarine landslides and mud-laden density currents, account for only 10% of cable faults, but when they occur they can break multiple cables resulting in regional slowdowns and/or outages.

As examples, three events in Southeast Asia off the coasts of Taiwan and Japan resulted in 15 to 22 cable breaks! Thanks to intelligent protection switching, traffic was automatically rerouted from faulted cables to working cables, so although connectivity may have slowed down in the region until cable repairs were completed, telecommunications connectivity wasn’t lost, which is critical in times of natural disasters.

Such disruptive natural events are unavoidable, given that many major cities are situated on earthquake-prone regions, such as those along the Pacific Ring of Fire. Advanced cable design and route planning are making such routes less hazardous for improved overall availability.

Ready to test your knowledge of Submarine Networking? Take our quiz.

Lionel Carter, ICPC Environmental Advisor from Victoria University in New Zealand, will be hosting a webinar entitled “Cables and the Marine Environment – from Ocean to Cloud” where he’ll discuss the relationship between submarine cables that encircle our planet and the marine environment in which they reside. Interested? Then register for this highly informative webinar here.

In the meantime, check out the wealth of submarine network information available on the ICPC website at https://www.iscpc.org.

The ICPC encompasses +160 members from +60 nations including cable operators, owners, vendors, service providers, and governments. As a testament to the organization’s combined knowledge and experience, it was awarded United Nations (UN) Consultative Status last month.