Brian Lavallée
Senior Director, Solutions Marketing
Subscribe Subscribe to Ciena's communications
Intercontinental network connections do not stop at the beach. Learn how companies like NJFX, Zayo, and Ciena work together to get your data from the beach to you.

I recently wrote a blog about a submarine cable being only as good as the book-ended terrestrial backhaul networks that connect inland points of presence, such as central offices and data centers, to the submerged cable network. After all, the submarine cable is but one segment, albeit an often extremely long one, of an end-to-end inter-continental network connection.

Given submarine cable operators typically don’t own terrestrial backhaul networks on both sides of their submarine cable, they must partner with the right terrestrial network operators to ensure an optimized, reliable, and cost-effective end-to-end network service, overland and undersea, spanning thousands of miles.

As the world continues to cloudify, end-users are accessing required storage and compute resources housed in data centers, which can be close to the coastline, or further inland, depending on their application-centric network requirements, such as end-to-end latency, redundant paths, and of course, the best price. The growth and upward adoption of cloudification and virtualization are why the majority of submarine bandwidth is being turned up, and new cables deployed are associated with interconnecting data centers where content and applications increasingly live and breathe.

What’s in Your Intercontinental Network Connection?

If an end-user wants to connect two points of presence between continents separated by an ocean, submarine cables are the way to go, as they provide the highest capacity, lowest latency, and lowest cost, especially when compared to the only other viable alternative, communication satellites. Have you thought of the other parts along a bit’s journey that completes an end-to-end intercontinental network connection? If not, you definitely should since submarine cables are but one part of an end-to-end connection, albeit one operating in the harshest environment on earth, the ocean bottom.

Once a submarine cable reaches the shoreline, it’s typically terminated in a Cable Landing Station (CLS) where it’s connected to terrestrial networks, commonly via a fiber exchange, which completes the end-to-end network connection. The traffic handed off may be the entire submarine cable fiber pair, one or more wavelengths (channels), or in some cases sub-wavelength via an SDH, OTN, or packet (Ethernet/MPLS/IP) switch or router. This makes the fiber exchange a critical junction point in any end-to-end network connection, similar to the role railway junctions play in deciding what railway cars are connected to what cities via different railway tracks. The CLS and fiber exchange can be housed in geographically separated buildings, or more conveniently, within the same building.

NJFX, a Carrier Neutral CLS colocation campus, with a Tier-3 design is an excellent example of a fiber exchange providing several unique routes and bypass strategies. Through their extensive network of service providers, NJFX offers dark and lit fiber connectivity services with four fiber building entrances to their CLS colocation campus providing customers with the ability to choose how to interconnect domestic networks with international submarine cables. They also provide direct interconnection at the submarine cable head. 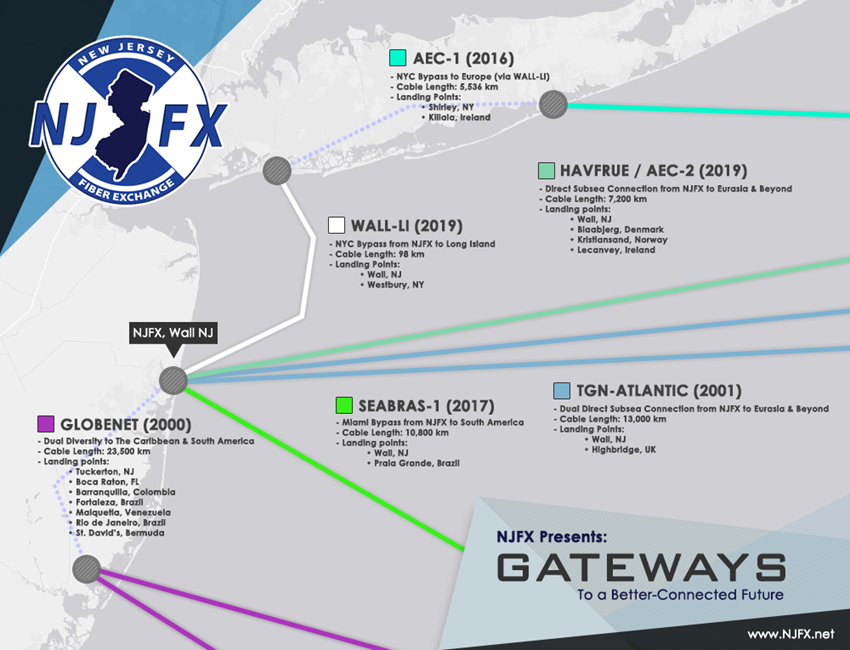 Although we’d all love to live and work on the beach, most of us don’t, meaning the terabits of traffic received each second over a submarine cable terminated in a CLS must still connect to terrestrial backhaul networks, and onwards to the final destination, often over redundant and diverse paths. Thus, once a submarine cable reaches the shoreline and is terminated within a CLS, it still has to go somewhere, which is typically inland to a traditional service provider’s central office or increasingly, a data center.

Zayo, an example of a terrestrial network provider, provides high-performance fiber connectivity between NJFX and inland companies. Zayo provides low-latency solutions and fiber connectivity to submarine cables to its diverse base of customers, which include finance and fintech firms. NJFX then connects them onto Europe and South America.

As a communications infrastructure provider with an extensive fiber network in North America and Europe, Zayo offers dark fiber, wavelength, and Ethernet connectivity between end-users and the submarine cables that connect to other continents. Flexible options offered allow end users to decide how to connect to the intercontinental submarine cables based on their specific business requirements. It’s such innovative terrestrial service providers that enhance the customer’s end-to-end network performance.

Putting It All Together

Although submarine cables are critical parts of the global network infrastructure carrying upwards of 99% of all intercontinental communications, as well as $10 trillion worth of transactions each and every day, it’s just one part of the overall end-to-end network connection. Of equal importance in the service path are the CLS, fiber exchange, and terrestrial backhaul networks that complete the final network connection directly to end-users.

Partnerships are very important, with the combined network assets ultimately dictating the overall quality of experience of the intercontinental network service. Certain industries, such as the finance sector, view international and intercontinental connectivity as crucial to their core business. This mandates choosing the right partners, directly or indirectly, is a key business decision that must be well-understood before final decisions are made to ensure there’s no “weak link” somewhere in the end-to-end intercontinental network service path.

Do you know who’s in your intercontinental end-to-end network service path? You should.