Brian Lavallée
Senior Director, Solutions Marketing
Subscribe Subscribe to Ciena's communications
We sit down with Amy Marks, CEO of XSite Modular, a leading cable landing station builder, to get her valuable insights on the submarine network industry and understand what is driving the latest innovations for landing stations.
Meet with us at PTC19!
The submarine networking industry continues to experience significant churn with a sea change of innovative new technologies finding their way into building intercontinental networks, overland and undersea, such as coherent optics, artificial intelligence, encryption, packet switching, and much more. These technologies, alongside the pioneering PoP-to-PoP networking design enabled by GeoMesh Extreme, have and will continue to change how end-to-end intercontinental networks are designed, deployed, managed, and maintained now and into the future.

Although much attention and fanfare is understandably focused on the optical wizardry that has allowed submarine network operators to reach previously unthinkable total information-carrying capacities on both their legacy and new submarine cables, there’s another part of the end-to-end network connection that’s critically important – the Cable Landing Station (CLS). This often-overlooked part of the global network infrastructure is often where submarine networks meet terrestrial networks. As is the case with networks, the CLS has and will continue to undergo changes allowing submarine cable operators to build increasingly reliable end-to-end intercontinental networks. 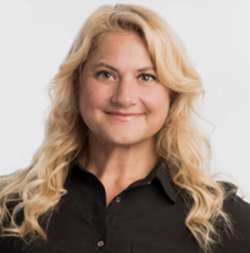 I sat down with Amy Marks, CEO of XSite Modular, to get her views on the submarine network industry from the perspective of a leading CLS builder and innovator.

Amy: Transmitting more than 95% of the world’s telecom traffic, submarine networks have never been more critical to global voice and data communications. Submarine cables and their connections to terrestrial networks enable real-time access to business and consumer applications, social media, streaming video, websites, and many other bandwidth-intensive services. This traffic flows through network equipment in a CLS, which impacts how the CLS is designed, deployed, and managed.

Brian: Are submarine cable operators concerned with drivers other than increased bandwidth?

Amy: The continuing increase in global bandwidth requirements is also associated with a steady price erosion for intercontinental submarine capacity, and yet the frequency at which new cable projects are announced is an indication that demand for undersea infrastructure is likely to remain high. A main concern facing submarine cable owner-operators in the coming years is how to significantly reduce the operating costs of their networks.

Additionally, although the submarine cable industry is undergoing a surge in new builds, much of the existing infrastructure that was put into service between 2000 and 2001 is nearing end-of-life and will soon face retirement. That means more new cables deployed on existing routes and expansions of networks will become necessary —  not just linking major global hubs, but emerging and underserved markets as well. Thus far, hyperscale Internet companies have focused their investments on building new cables on transatlantic, transpacific, U.S.-Latin American, and intra-Asian routes. However, other new submarine arteries linking Europe to Africa, India to Europe, and India to Singapore are also becoming the focus of cable owner-operators.

Driven by a surge in global bandwidth demand and an increasingly borderless digital economy, the rate at which new submarine cables are coming online calls for a new paradigm in submarine network architecture as well as a new means of procuring, designing, and building a CLS at the systems’ endpoints.

Brian: How is XSite Modular addressing drivers related to increased bandwidth at a reduced cost?

Amy: In a CLS, submarine networks interconnect to inland terrestrial networks, typically via a backhaul network into the carrier’s inland Point-of-Presence (PoP). In an effort to protect their revenues and margins while combatting ongoing price erosion, many submarine cable owner-operators are identifying the CLS as a key area in the network where significant reductions in power consumption, space allocation, equipment complexity, and construction and operating costs can be achieved. One a related note, this is a primary benefit – simplification – of Ciena’s GeoMesh Extreme PoP-to-PoP architecture, which eliminates a significant amount of networking equipment when compared to traditional, and now obsolete, architectures of the past. Today, equipment located in a CLS can fully leverage the more rapid technological advances of terrestrial optical networks and associated cost savings from higher production volumes. 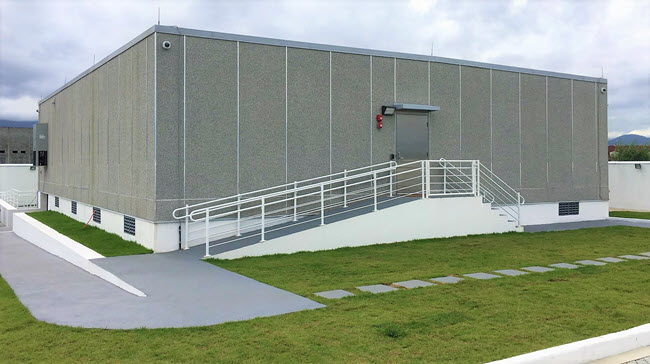 Most CLS’s use traditional “stick-build” construction whereby various components are transported to a site and then put together into a final product at great cost, time and labor. Compounding this challenge, stick-built CLS’s constructed in many countries may involve firms lacking adequate experience in the design-build of these highly specialized buildings. This leads to creating one-off solutions without an understanding of the complete use case and nuances of equipment layout and selection, which can have a significant negative impact not only on performance but future operational costs. For example, today’s smaller, denser submarine network terminals allow for more compact building specifications.

Amy: To reduce deployment timelines, the use of modular design-build methods in the form of Modular Cable Landing Stations (MCLS), built in a controlled environment by experienced labor, offer the advantage of integrating design flexibility to meet the specific technical requirements of a new subsea cable project. Modular design-build processes also provide cost certainty from the earliest concept phases through completion. Providing the advantages of a Containerized Cable Landing Station (CCLS) solution but possessing much higher quality, resiliency and durability than either traditional site-built CLS’s or containers, MCLS are defined as permanent steel and concrete buildings designed to a 50-year plus lifespan.

Because they are coastal installations, all CLS’s must possess the structural resiliency to withstand extreme weather and other adverse events. MCLS can withstand the worst natural disasters, security threats and failure scenarios, including heavy wind and seismic loads. As proof, we need only look to this past October, when Super Typhoon Yutu struck the Pacific Islands including the hardest hit Island of Tinian with maximum gusts of up to 190 miles per hour: XSite’s hardened MCLS remained standing and continued to perform optimally throughout. XSite’s MCLS provide such critical services as cooling, ventilation, fire detection and suppression, AC backup power, cable management, access control, video surveillance, and a building management system, among others. They can be designed as hardened structures to perform under physical threats, natural disasters and system failure.

Terrestrial networks have been moving toward packet-based systems because they offer many benefits, including statistical multiplexing, over-subscription and economies of scale. Enabling submarine network operators to enjoy the same advantages as their terrestrial counterparts, Ciena’s GeoMesh Extreme provides all these benefits as well. By including packet switching, undersea cable operators can seamlessly carry packet services from end-users to data centers and everything in between, whether transmitting data overland or across vast transoceanic distances between continents.

In viewing the network from the end-to-end service paths, GeoMesh Extreme blurs the lines between submarine and terrestrial networks while adding a significant number of new features and technologies built on cloud-based software innovation. Beyond enabling submarine cable operators to scale information-carrying capabilities, GeoMesh Extreme also protect terabits of traffic from inevitable cable faults and lowers the total cost of network ownership to protect revenues and margins.

Where there’s an absence of existing data centers near landing points that prevents cable owner-operators from directly connecting their networks in PoP-to-PoP configurations, GeoMesh Extreme can be integrated into MCLS or a hybrid MCLS/data center to secure much needed connectivity. This is especially the case as more emerging and undeserved markets are reached by new or expanding subsea cable systems, including many markets throughout Africa, Central and South America, and Asia.

It’s quite clear that the Cable Landing Station is critical infrastructure in the end-to-end service path… wouldn’t you agree?

On the Submarine Network Horizon in 2019