Brian Lavallée
Senior Director, Solutions Marketing
Subscribe Subscribe to Ciena's communications
Ciena’s Submarine Network Expert, Brian Lavallée just got back from PTC19, where 5G, Shannon’s Limit, and Spatial Division Multiplexing (SDM) were all hot topics. He gives a peek into what was talked about, and what’s next for Submarine Networks EMEA coming up in London.
Meet with us at Submarine Networks EMEA 2019
The submarine networking community just concluded close to a week of presentations, panel discussions, debates, and of course, meetings both formal and informal at the latest PTC event. Many discussion topics  carried over from Submarine Networks World last September, such as Spatial Division Multiplexing (SDM) and even the impending onslaught of 5G and its effect on the global network infrastructure, from access to submarine, and everything in between. It was clear from my meetings that the submarine networking industry is rapidly evolving with many new technologies affecting how submarine networks are designed, deployed, managed, and maintained. 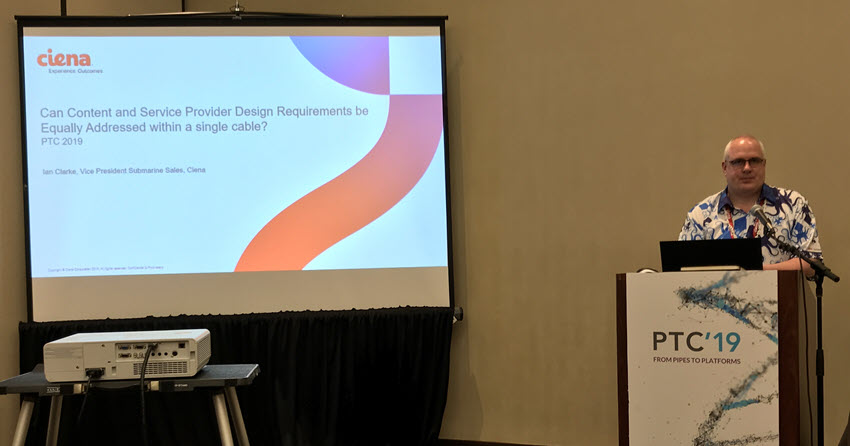 5G is the new SDN, in terms of hype in the marketplace. Optimistic performance goals are touted, although no one really knows what the end-users, humans and machines, will actually experience in terms of improved performance compared to existing 4G LTE, LTE-Advanced, and LTE-Advanced Pro mobile networks. However, what’s known, at least qualitatively, is that a significant increase in wireless access connectivity, alongside far lower latency, will enable a whole range of new and improved use cases, many of which are still a twinkle in the eyes of developers.

Case Study
ACG Research: Southern Cross Submarine Network Transformation
Touted 5G improvements, such as up to 100x faster speeds, will result in major increases in data flowing between user equipment, such as powerful 5G-enabled smartphones for enhanced Mobile Broadband (eMBB) applications, and data centers, where accessed content is hosted. This will have a subsequent effect of data centers sending more information between themselves, and a lot of it flows across submarine networks, as evidenced by the majority of projected bandwidth growth attributed to Data Center Interconnection (DCI).

In other words, as 5G wireless access performance increases along the preferred user-to-content path, more and larger content will start to flow along this path. More and larger content will also start flowing along the content-to-content path, both overland and undersea. No one can accurately predict how much of an impact 5G at the edge will have on submarine networks in the core, but as history has taught us, if faster speeds and lower latency are made available, voracious consumption follows.

Meet with us at Submarine Networks EMEA 2019

We’re already knocking on the door of the Shannon Limit, which is the maximum amount of data that can be carried over a communication medium in the presence of noise, like a submarine cable optical fiber pair. Although the incredible wizardry of coherent modem technology continues unabated, unfortunately, we can’t break the laws of physics and are faced with a real limit to the maximum information-carrying capability of a submarine optical fiber.

There Must Be a Better Way!

Article
GeoMesh Extreme:
Release the Kraken!
We could simply deploy more submarine cables along primary traffic corridors, which is happening now in all parts of the world, but it’s very time-consuming and quite expensive. There’s simply no viable alternative – satellites need not apply – to optical submarine cables in terms of capacity, security, latency, and upgradability. Thus, we’re left with two choices – deploy more cables, and/or develop new submarine cable designs with more fiber pairs. Both are viable options, with the required number of cables and maximum possible fibers pairs being hotly debated.

Adding more fiber pairs to submarine cables is nothing new, as the industry has been doing this for decades but once laid upon the seabeds of the world, the only way to increase their capacity is via Submarine Line Termination Equipment (SLTE) modem technology advancements. This has led to the upgrade market being created, where SLTE modem technology advances very quickly. It’s also far easier to swap out accessible land-based equipment.

Although a rather complex term, SDM simply means adding more fibers – a lot more – to future submarine cables with as many as 32 fibers and more discussed. This is high compared to the 4 to 8 pairs in most modern submarine cables deployed today. The basic tenet of SDM is to operate at a lower Optical Signal-to-Noise Ratio (OSNR) and lower Total Output Power (TOP) per fiber pair, for better power efficiency, and use the saved power to power more fiber pairs. The result is a lower per fiber pair capacity, but a higher overall submarine cable capacity. Of course, there are modem implications as well, but you get the general idea of SDM – more fiber pairs for more capacity.

SDM is indeed a promising idea and likely find its way into new submarine cable designs. The number of deployed fiber pairs will be determined, as several outstanding technological challenges are addressed. As there’s simply no via alternative to submarine cables for intercontinental connectivity, SDM is indeed an idea worth pursuing.

Would you like to know more about these topics and many others that are and will affect the submarine networking industry going forward? Then join us at Submarine Networks Europe running from February 12 to 13 in jolly ‘ole England (London). Ciena is an active participant in this European event with the following activities planned. 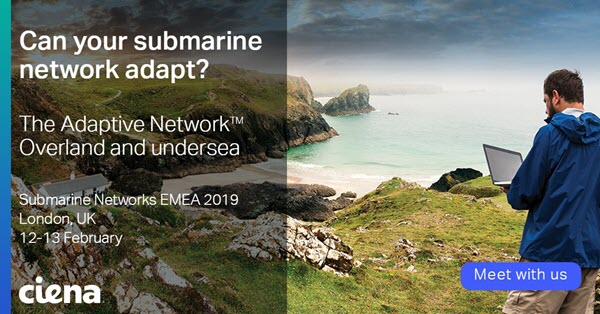 We hope to speak with you in London to discuss the incredible sea changes happening in what I believe is the most fascinating part of the global network infrastructure. Over 99% of all intercontinental telecommunications is carried over submarine cables, which is literally the size of a common garden hose, with no viable alternative. This means ongoing innovation is a matter of absolute necessity, as a submarine cable network is indeed critical infrastructure.