December 1, 2017
Subscribe Subscribe to Ciena's communications
If you’ve been around the telecom space for a while then you may remember a former Ciena mascot named Lightworks Lou. That’s right, the wiry, fibery, mitten-wearing Ciena mascot who burst onto the scene in the early 2000s with his stylish orange vest and official Ciena hard hat.

Fast forward to 2017. It’s Ciena’s 25th anniversary and although Lightworks Lou is technically retired, he has been known to still make an occasional appearance around the Ciena offices.  So we were able to catch up with him for a rare behind-the-scenes interview on what he’s been up to since stepping out of the limelight those many years ago. 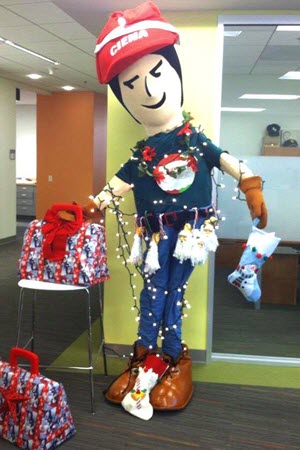 Ciena: So Lou, what have you been up to since your last sighting? How are you filling the hours these days?

Lou: Catching up on a lot of reading, mostly. Netflix. GoT. Some quilting. Oh, and researching how discoveries in quantum physics will impact the development of AI in neural networks.

Ciena: You still carry your phone around everywhere in your vest pocket. What model is that exactly?

Lou: Sure do. It’s a Nokia 5190. Built like a tank with a very soothing greenish colored screen. It even has caller ID and can text… although it does take quite a while to spell out “running late.” So that’s ironic.

Ciena: Tell us about those heavy gloves… is it hard to plug in Ethernet cables with those on?

Lou: Oh, I have people to do all that hands-on network management stuff, I’m not really in the weeds with the gear anymore. Although I do miss the feeling of a completed install with good ol’ CoreDirector.

Ciena: In late 2000 you were punched in the head outside the elevators at NFOEC in Denver. Is the investigation still ongoing?

Lou: Ok, I was hoping you weren’t going to ask about that. To this day I’m still bothered by the fact that my face-punching nemesis is still at large. But I’ll tell you what hurts even more than being socked in my padded noggin… being compared to Barney in that news article about it. I don’t think I’ll ever heal from those scars.

Ciena: People compared you to Barney?

Lou: Yup. Which is ridiculous because Barney doesn’t know anything about optical or DCI or even mobile backhaul. He’s a &^%*$ dinosaur! He can’t even fit in a data center. It’s just a ridiculous comparison.

Ciena: Ok, I’m sorry for bringing it up. Let’s change the subject. When was the last time you were at Ciena HQ?

Lou: It’s ok, I just get a little touchy about that. And yes, I was at HQ last December to spread some holiday cheer and had a great time with the incredible staff there. I’ll tell you what, nobody has the kind of people that Ciena has. They are truly world class. Although, to be honest, the egg nog was flowing and all I remember was a late-night Karaoke party and being put in an Uber by someone from the marketing team. But overall, great times. Love the HQ.

Ciena: You know we just built a huge new campus in Ottawa, right?

Lou: Yes! I saw the pictures and the news story. I hope to visit sometime soon but I don’t take my yacht out for transatlantic trips after November. So hopefully in the spring. It’s a very pretty building.

Ciena: So you know it’s a pretty big year for us with it being Ciena’s 25th anniversary. What has you the most excited about this milestone year?

Lou: I really couldn’t be prouder of Ciena. Even back in the early 2000s when it was all Spice Girls and free AOL cd’s, I just knew that Ciena was going to make it for the long haul. And not just make it, but really thrive. I couldn’t be prouder than to have been Ciena’s Mascot for those unforgettable years and I pay my respects to the mascots that went before me in this journey. Much respect, Firefly.

Ciena: Lou, you’re such a cool guy. When you’re not on your yacht in the French Riviera, where can people catch up with you?

Lou: Well, mostly on Ciena Community. It’s a great place to hang out with some of the great folks out there using our gear and tackling their network challenges together. I’m also spending a ton of time hopping around Asia, trying to keep up with everything Ciena’s doing over there.

Ciena: Lou, really appreciate the time. All the best.