What’s making the cloud so edge-y?

A new generation of cloud-native applications are arriving that are more compute-intensive and latency-sensitive. Ciena’s Mitch Simcoe details how the move to an Edge Cloud architecture can address a variety of new use cases.

This is the first blog in a series about Edge Cloud. You can also read the second post, How being at the beach helps the Cloud be more edge-y.

Now, a new generation of cloud-native applications is emerging in categories such as entertainment, retail, manufacturing, and automotive, which, in many cases, will be far more compute-intensive and latency-sensitive. Traditional centralized cloud architectures cannot meet the Quality of Experience (QoE) expectations for these applications and use cases and will require a more dynamic and distributed cloud model.

As a result, compute and storage cloud resources must move closer to the edge of the network, where content is created and consumed by both humans and machines, to meet the expected QoE. This new approach is referred to as Edge Cloud, where storage and compute is networked at the edge.

This is the first in a series of blogs to discuss the industry drivers, challenges, and opportunities of Edge Cloud, and explain how ecosystem players must prepare for the shift of some centralized cloud functionality to the edge.

So, what is the Edge Cloud?

Ciena defines the Edge Cloud as a cloud ecosystem, which is physically nearer to end-users, humans, and machines, encompassing commodity-off-the-shelf compute and storage components coupled to highly scalable and programmable networking components. These components interconnect to form an Edge Cloud that’s interconnected to the rest of the traditionally centralized data center network globally, and therefore must be application-aware so sensing and adapting to changing needs can be performed securely and in real-time.

Another way to look at Edge Cloud is to look at an analogy from the physical world.  When ecommerce companies like Amazon started out, they would ship all of their products from a warehouse near to their headquarters like Seattle.  That worked well regionally, but as they expanded nationally, shipping times could not meet their customer’s expectations.  To significantly reduce shipping times (analogous to network latency) they built warehouses all over the US, close to their customers and maintained stock (analogous to content) locally.  Their local warehouses would be the physical equivalent of an edge data center.  They have taken that concept to the max by building small warehouses in Manhattan to reduce shipping times to hours from days for a subset of their products.

So what applications are driving the need for Edge Cloud?

An increasing number of applications require real-time latency. The business drivers for these are not only consumer behavior, but enterprises improving their operations or monetizing improved customer experiences. Emerging use cases in these areas that are bandwidth and low-latency dependent include:

As more and more live and recorded video content is now being streamed by consumers both at home and on mobile devices, there’s an increased need to move this content closer to users to improve performance and optimize long haul networking costs. The use of Content Delivery Networks (CDN) and local caching has been a traditional use case for edge storage, where popular content is cached in edge data centers, closest to where end-users consume their content.

In a cloud gaming scenario, gamers no longer require dedicated hardware, such as a traditional gaming console. They would continue to play their games using gaming controllers, but they would be connected to a gaming app on their device of choice (tablet, computer, or smartphone). In an edge computing model, gaming video is now streamed to the gamer’s device from a server in an edge compute data center. To match the performance of a local gaming set-up, both the low latency of these connections and the required bandwidth of gaming video, increasingly 4K, must be served from the cloud edge. 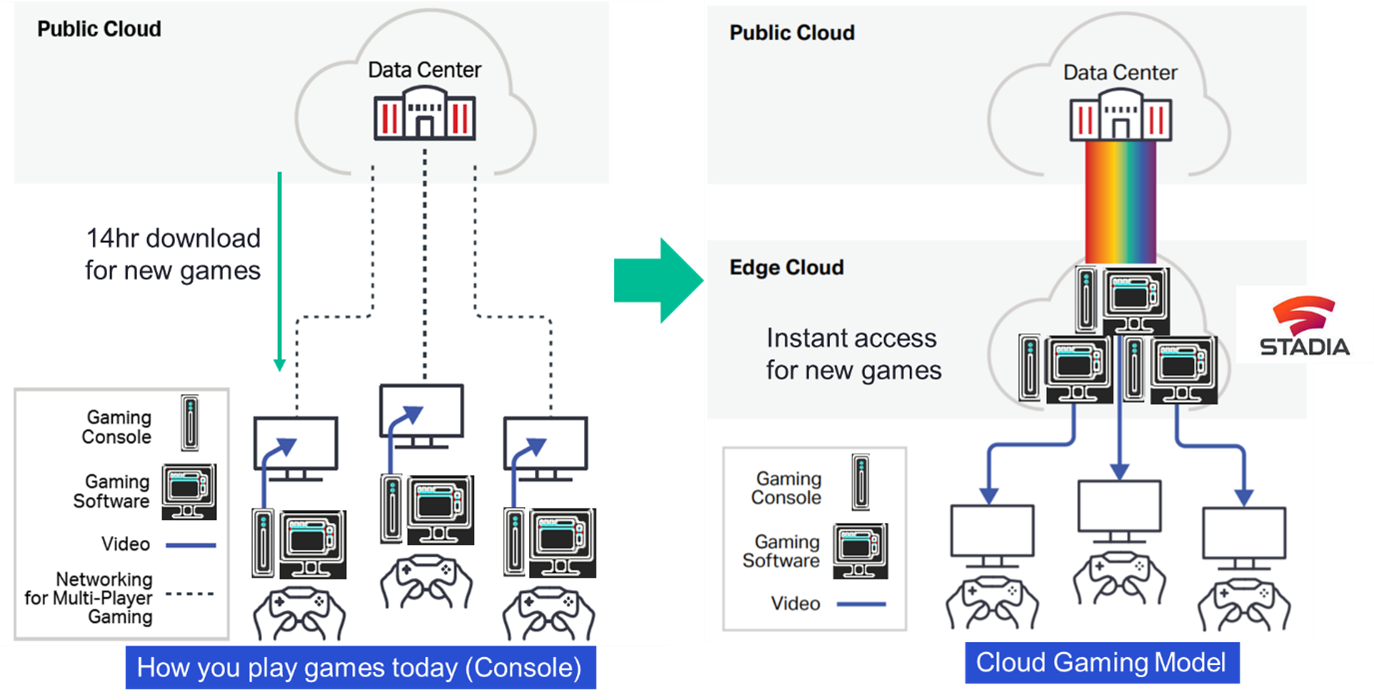 This is a new approach where retailers (example: Amazon Go stores) embed cameras into store ceilings to capture images of shoppers purchasing goods. These images are analyzed through AI to determine what goods shoppers have purchased and eliminate the need for shoppers to go through a cashier at the check-out counter while their credit cards are billed directly for the goods they have purchased. Significant compute and storage resources are needed either in the retail stores or at the edge to perform this near real-time image processing to deliver a seamless customer experience.

While it is expected that autonomous vehicles will process vast amounts of data from sensors within the car, for example, there’s a need to process a subset of this data with that of adjacent cars and street sensors in support of traffic congestion, road conditions and accident management. The latency to process and relay data back to the cars to take actions must be completed in milliseconds requiring an edge data center very close to the user to meet these application SLA requirements.

This is an initiative around Industry 4.0 where the manufacturing process is highly customizable and automated. Manufacturing lines are occupied by industrial robots whose functions are carefully controlled by local computing resources that use machine learning and AI to detect defects identified in the manufacturing process and adjust accordingly in near real time. To simplify connectivity on the plant floor, intelligent industrial robots will be connected via 5G (private or carrier managed) and will require low-latency, and often high-capacity, network performance to ensure low manufacturing defects and maximize safety of local workers.

These applications all share one of the following cloud service attributes driving the need for edge computing:

To learn more about how you can build out your Edge Cloud, download our white paper, The Adaptive Network: A Framework for Understanding the Networking Implications of the Edge Cloud.