Daniele Loffreda
Senior Advisor, Industry Marketing
Subscribe Subscribe to Ciena's communications
For cities to evolve and realize the full benefits of becoming “smart” they will require real-time access to multiple sources of data from different locations. Ciena’s Daniele Loffreda explains what is needed from the next-generation of networks to make smart cities a reality.

Apple CEO, Tim Cook, said it best during a commencement address at the prestigious Massachusetts Institute of Technology (MIT) last year when he proclaimed science and technology are worthless, if they aren’t motivated by the desire to help people. This belief can be just as correctly applied to the planning and development of smart city initiatives.

We are beginning to see smart city planners involve citizens in each step of a project, from design through measurement and revision.  Citizen engagement is now mentioned in smart city circles just as much as the range of sensors, devices and video cameras to be deployed.

White Paper
Analysys Mason: From Autonomous to Adaptive: The Next Evolution in Networking

These technologies were the subject of much discussion during the recent Smart Cities Connect Spring Conference. City officials, academics and industry representatives predict that human to machine interaction will soon become the norm, enabled by algorithms and deep neural networks that derive insights that humans alone could not achieve.

The resulting “smart adaptive city” will be better equipped to address dynamic variations in daily life.

The resulting “smart adaptive city” will be better equipped to address dynamic variations in daily life such as fluctuations in energy and water demand, varying mobility needs of a diverse population, and personalized medical requirements of multi-generational families.

Many smart city projects of the past focused on one or two “anchor” applications such as traffic management, energy or lighting.  These projects were usually led by a specific agency over separate connectivity, compute and storage platforms.  Data generated was typically not shared outside the individual agency.  For example, an electric department may be reluctant to share a network platform with public safety or education departments, as each group wants to ensure its network traffic is always the top priority.

Smart city planners are now focusing on how to converge the disparate technologies into a more collaborative environment, which enables cross-sharing of data so agencies can act to improve services to citizens and business constituents. And a converged connectivity platform between the multiple stakeholders is critical.  As Canada’s Centre of Excellence in Next In Generation Networks’ (CCEGN) CEO Ritch Dusome recently commented during the Machine Learning and Artificial Intelligence in Smart City Networks panel discussion, “it’s not smart if it’s not connected”.

The sharing of data is also crucial to achieving the potential benefits of AI and ML.  To be most effective, AI and ML need ongoing, instantaneous access to multiple sources of data from diverse locations.  This allows them to apply the most up-to-date information to help decision makers more quickly and accurately address situations that are detected by the millions of devices deployed in a smart city. 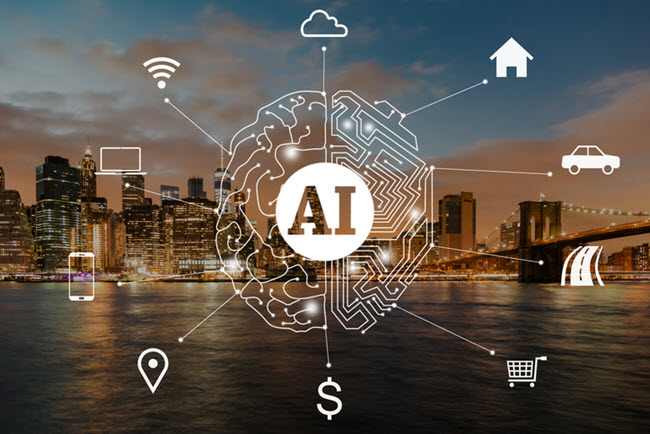 During the Smart Cities Connect conference there was a workshop titled “Smart Cities Dumb Pipes”.  I challenged the organizers about the title, which contradicts most smart city planners’ assertions that a robust communications infrastructure is the key foundation for any smart city project.  They admitted that the title was more of a marketing choice to attract attendees.  In fact, the panel discussion focused on why smart cities need to scale up their communications infrastructure.

To meet the needs of this next iteration of smart cities, the underlying network should adapt intuitively.

Artificial Intelligence and Machine Learning are having a significant impact of smart city network requirements.  Millions of AI and ML -augmented “smart” devices aggregate billions of data points, generating floods of data of varying traffic types, priorities and latency-sensitivities.  This variety can cause abnormalities and spikes in network traffic.

To meet the needs of this next iteration of smart cities, the underlying network should adapt intuitively.  For example, during city events, mass-impact incidents or other periods of sudden communication needs, the network needs the ability to shift bandwidth when and where it’s most required.  Once the spike is finished, the network should be able to revert back to normal operations.

To avoid unplanned traffic outages the network should have the ability to analyze data patterns, identify when and where a potential network outage will occur, and take appropriate action.  This process should be automated, based upon policies developed by network managers.  When problems do occur, the network needs to rapidly conduct root-cause analysis, incorporate key learnings, and enable managers to adjust policies accordingly.

The next generation of networks will incorporate the same AI and ML technologies that are augmenting traditional smart city applications.  Combined with Software Defined Networking and Network Functions Virtualization,  AI and ML will provide the intent-based automation and flexibility to make these multi-domain, multi-vendor, densified communications infrastructures as dynamic as the smart cities themselves.

A version of this article previously appeared on Smart Cities Drive.

Is technology the answer to stopping unsafe driving behaviors?