What is Bandwidth on Demand?

September 17, 2014
Niloufar Tayebi
Subscribe Subscribe to Ciena's communications
Today, connectivity services are a mostly static experience, meaning that once the endpoints and service attributes are defined, not much changes.  However, the age of cloud networking means that static connectivity just isn’t enough anymore. What’s increasingly needed is a network that gives us the bandwidth we need, when we need it.  That’s why you’ve likely been hearing more about bandwidth on demand lately. But what exactly is bandwidth on demand and what will it mean for networks and end users alike?

Niloufar Tayebi is a Senior Advisor in Ciena’s Global Industry Marketing team, focused on helping service providers find new revenue streams from their networks through on-demand and other value-add services.

This is the second in a series of blog posts focusing on BoD and on-demand services. Other posts in the series:

To put a fine point to it, the world revolves around bandwidth.

It’s no secret that connectivity is the lifeblood of the digital superhighway, nor is it a secret that global telecom infrastructure struggles to keep up with the demand volume and ever-shifting ways that we use it.

Today, connectivity services are a mostly static experience, meaning that once the endpoints and service attributes are defined, not much changes: someone needs a connection, they sign a contract, it gets turned on. And that usually takes quite a long time to establish, from a few days to few weeks.

However, the age of cloud networking means that static connectivity just isn’t enough anymore. The demands put on our networks are changing. The expectation is that network capacity will adapt to our bandwidth needs and changing end points, instead of vice versa.

You may have heard it called Network as a Service (Naas) or BoD but essentially, we’re talking about the same concept: Bandwidth on Demand allows you to customize your connectivity parameters, giving you control over your network usage like never before. For example, you may request an increase in your service bandwidth from 1G to 10G every Saturday night, for just three hours, in order to perform a large-scale data backup. The network delivers it and then, after that time period, your bandwidth service goes back to business as usual.

The most likely prediction is that our network traffic will live in a hybrid model, where static and on-demand services will co-exist. The benefit here is that on demand services provide flexible bandwidth, locations, and connectivity times – three highly compelling and customizable factors that static services simply cannot provide.

If you’re a service provider, by now, you’re probably envisioning a host of applications for BoD and wondering how you might package and market such an offering in a specific vertical or target. Here are two specific examples of BoD that nearly everyone can relate to:

Stadiums: Stadiums and sporting arenas have drastically fluctuating bandwidth demands. During off-hours, these venues have little need for massive connectivity as compared to times when events are happening. In fact, there’s such an extraordinary difference in bandwidth demand that it begs the question, why should a stadium or sporting arena be forced into a static contract for such a dynamic use case?

Healthcare: With emerging changes in privacy laws, record-keeping, telemedicine, and the coming of wearable health monitors, healthcare provider networks consistently struggle to keep their data infrastructure current with the technologies employed by their hospitals and clinics. A dynamic broadband solution here would absolutely be in step with the evolving and growing data needs of the healthcare industry.

This isn’t to say, however, that static networks are the wrong choice or that BoD will replace existing static services entirely. Instead, it’s meant to assist and enhance them, like renting a car to make a business trip easier – you have a car at home (your static network) but you still need something to get you around when you’re away (bandwidth on demand).

With enabling technologies like software defined networks (SDN) and network functions virtualization (NFV) on the horizon, it’s clear that bandwidth on demand is coming. The challenge for service providers is two-fold:

(2)  How to position BoD services so that they complement static services instead of cannibalize them?

We’ll answer those questions and more with the next few posts in this series as we dig deeper into BoD and explore the implications and issues associated with service providers making the shift and what it means for their customers. 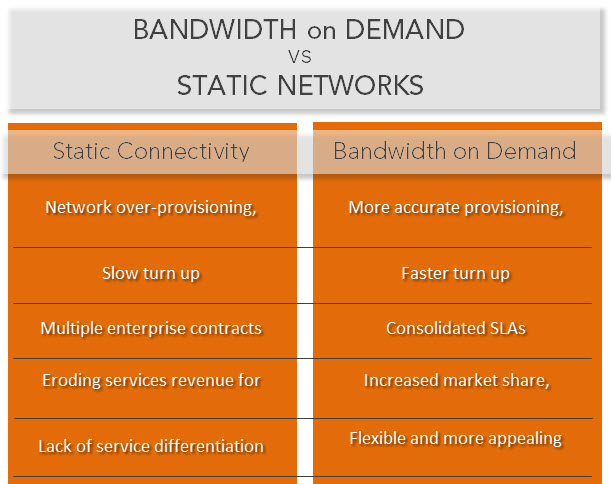 Articles
What is Web3 and how does it relate to the metave ...

Web3 is coming, and it embodies a set of technologies that will change the way we interact with our digital universe. Ciena’s Dav ...