Brian Lavallée
Senior Director, Solutions Marketing
Subscribe Subscribe to Ciena's communications
With tens of thousands of new kilometers and over a billion dollars of capital investment planned in new submarine cables – the LATAM market sure is hot. As we get ready for the Capacity LATAM event in Rio de Janeiro, Ciena’s Brian Lavallée details what is driving this growth and how cable operators can differentiate themselves.

Moving forward, the ICPs will likely generate and consume an ever-increasing portion of regional bandwidth, primarily for data center interconnection (DCI) purposes, just as they’re doing in all other regions of the world. We love their internet content, don’t we?

Show Me the Cables!

Given the impressive amount of bandwidth growth in the region, it’s no surprise that numerous submarine cables have been announced to address increased demands. It should be noted that the new submarine cables are not driven just to address regional bandwidth growth. They are also being driven by the need to provide additional connectivity options, increase overall regional competition, lower international bandwidth prices, bypass the USA as a transit point to Europe, connect directly to Africa, address political issues, and lower the transit latency via more direct routes.

Two new submarine cable systems entered into service in 2017. They’re Monet, owned by Algar Telecom, Angola Cables, and Google, and Seabras-1, owned by Seaborn Networks. According to Anahi, these two cables added a total of 136Tbps of potential capacity between the U.S. and Latin America in 2017.

Other new cables planned in the LATAM region are captured below and will add tens of thousands of new kilometers from over a billion dollars of capital investment. 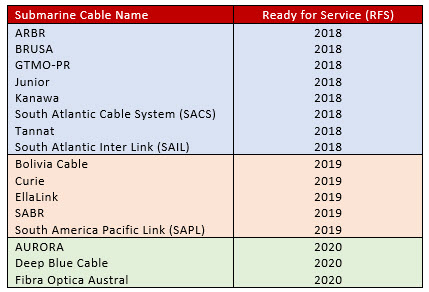 If you’d like to find out more about these new cables, what end points they’ll connect, where they’ll be deployed, and who’s investing in them, check out TeleGeography’s excellent cable database found here.

Although these new LATAM cables will surely lead to increased competition along many regional routes, the lowest cost per bit is just one method of differentiating the abundance of new bandwidth available.

Think you know submarine networking? Then take our Quiz!

Cable operators can sell “virtual fiber pairs” via spectrum sharing technology, which is the offering of flexible and upgradable THz, rather than traditional fixed Tbps. Encrypted services, protected services, self-serve customer portals, and bandwidth-on-demand are other innovative ways to add value to basic connectivity services that help to differentiate in a hyper-competitive market.

Visit Us at Capacity LATAM

Ciena is highly dedicated to supporting the region by operating in LATAM for over 15 years with regional offices in south Florida (USA), Buenos Aires (Argentina), México City (México), Guadalajara (Mexico), Bogotá (Colômbia), São Paulo (Brazil), and Rio de Janeiro (Brazil), where on March 20 and 21, the Capacity LATAM the conference will take place.

Want to find out more about our GeoMesh Extreme submarine network solutions or just discuss regional market trends, challenges, and opportunities? If so, meet with us at Capacity LATAM. We look forward to seeing you this week.