Daniele Loffreda
Senior Advisor, Industry Marketing
Subscribe Subscribe to Ciena's communications
Cities are going smart – trying to deal with the proliferation of people, sensors, automobiles and a range of devices that demand network access and generate mind-boggling amounts of data. However, being smart is not an instance in time, and a “smart city” is not static. To be worthy of the name, a smart city must continually evolve and stay ahead of demand. This is only possible if the city’s underlying network is just as smart and can adapt to its constantly changing environment.

Cities are constantly in flux. Populations move in; populations move out. Demographics change, economic growth falls and then soars. New leadership steps in and—if you believe all the commercials—technology will make everyone’s life better.

Municipal governments understand the need to consider which smart city applications will best serve the demands of their diverse demographic segments. The City of Austin’s Head of Digital Transformation, Marni White, summed up these challenges stating, “Our problems will continue to change over time, so our solutions also need to change over time.”

The one constant in the smart city is the network running underneath these solutions—and the truly smart city has a network that adapts. 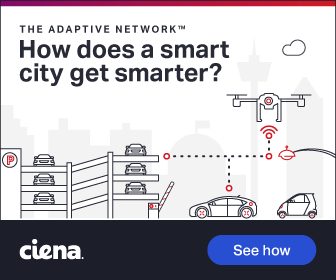 Smart city applications must be aligned with where a city and its citizens want to go. Some municipalities that created model smart-cities early on have had to initiate extensive revamping. For example, the City of Barcelona has long been at the cutting edge of using digital devices and the Internet of Things to improve municipal operations; however, in 2017, Mayor Ada Colau gave Barcelona’s CTO, Francesca Bria, a mandate to “rethink the smart city from the ground up.”

This meant shifting from a “technology-first” approach, centered on interconnected devices, to a “citizen-first” focus that responds to the changing needs that residents themselves help define.  As a result, Barcelona expanded its smart applications beyond staples such as traffic management, parking, and lighting to include multi-use “smart” buildings, sustainable mobility, renewable energy and better water management. Bria also discarded disparate, proprietary IT systems in favor of open standards-based platforms. These platforms integrate data from thousands of IoT devices that previously did not communicate with each other.

Expanded public-private partnerships are giving rise to the concept of “smart city as a platform.”

Smart City as a Platform

Many cities are similarly evolving beyond just connected infrastructure and smarter devices. In some cities, citizens, visitors and businesses act as “mobile sensors” by carrying smart phones that are part of an intelligent connected ecosystem. The City of Bristol, for instance, is implementing a six-step framework to give citizens the ability to participate in and contribute to the way their city works. The Bristol Approach to Citizen Sensing meshes sensing technology with the resources and knowhow of citizens and businesses in a “living lab” environment to better serve the community.

Infographics and posters
How Does a Smart City Get Smarter?

Expanded public-private partnerships are giving rise to the concept of “smart city as a platform.” For example, some cities combine private ride-share services with autonomous city vehicles and public transit to provide door-to-door transport. Other examples include combining city health services with pharmacies, private vehicles and drone delivery services. Yet another scenario is “on-demand” trash-hauling based on digital monitoring by residents, rather than sensor-based trash bins alone.

These pilot programs require smart cities to be able to integrate capabilities, and to coordinate massive volumes of data, applications, and services at one or more levels across operational domains for multiple stakeholders. The goal is to create an open-source sensor network, with common standards, connected to a computer platform managed by the city itself. This real-time digital infrastructure is based on artificial-intelligence and machine learning, enabling the network to easily change as the needs of the city and its citizens change.

A New Approach: Infrastructures that Adapt

The integration of millions of connected devices and mobile “citizen sensors” interacting with machines, users and clouds requires a fundamental rethink of the network. To meet the dynamic needs of new smart city platforms, networks must be more predictive, agile, and able to rapidly scale to move massive amounts of data in real-time.

Ciena’s vision for a self-learning, self-optimizing communications infrastructure for smart cities is known as the Adaptive Network™. This new end-state for networks utilizes a unique combination of real-time analytics, intelligent automation, and a programmable infrastructure—to rapidly scale, self-configure, and self-optimize by constantly assessing the network pressures and demands of smart city applications.

The Adaptive Network is built on three key foundational elements:

1. Connect – Programmable Infrastructure: A programmable packet and optical infrastructure can be accessed and configured via common, open interfaces and is highly instrumented. Programmable infrastructure has the ability to export real-time network performance data and can adjust its resources as needed to meet the evolving demands of smart city platforms.

3. Act – Software Control and Automation: Multi-Domain Service Orchestration (MDSO), federated inventory, and centralized, software-defined control of individual network domains are a critical component of the Adaptive Network. The implementation of SDN, NFV, and open APIs simplifies the end-to-end management and automation of network services across a city’s multi-vendor, hybrid network.

The self-learning, self-optimizing Adaptive Network will enable the dynamic, real-time innovations that can improve citizens’ lives. Just as the evolution to a smart city neither happens overnight nor has a defined end-point, realizing the vision of the Adaptive Network is a journey. Each city will have a different starting point depending on its current network infrastructure, political objectives and citizens’ needs.

Ciena can help cities make this journey successful, offering a broad portfolio of products and services uniquely designed to meet the requirements of each smart city’s needs. Because Ciena knows that what makes a smart city truly smart is its ability to adapt.