To fiber or not to fiber, that is the question

Brian Lavallée
Senior Director, Solutions Marketing
Subscribe Subscribe to Ciena's communications
Fiber is the workhorse of today's global network infrastructure. But what do you do when fiber is just not an option? Ciena's Brian Lavallée details the real-world situations that often dictate the choice between fiber and wireless links for uses like 4G/5G mobile backhaul.

Strands of glass thinner than a human hair are today’s super highways of the telecom industry in all parts of the global network infrastructure, from access to ultra-long-haul submarine, and everything in between – and for good reasons. The information-carrying capacity of (optical) fibers has proven to be essentially limitless for decades, alongside other coveted benefits related to security, cost/bit, power consumption, and ease of installation and maintenance when compared to electrical communication mediums, such as copper.

Will fiber continue to be the workhouse for high-speed communications going forward, in all parts of the global network infrastructure? The answer is a resounding – YES – as there’s no viable substitute from a pure capacity perspective that’s essential to maintain pace with voracious bandwidth demands the world over.

Most network operators will choose fiber first and seek alternatives when they must, which will continue well into the future. However, sometimes it’s simply impossible to physically deploy fiber for a variety of reasons, such as unobtainable rights of way or exorbitant installation costs. For instance, its far easier to install fiber in the suburbs than in the downtown city centers of New York, London, Paris, Tokyo, Mumbai, São Paulo, or Mexico City. You could deploy aerial fiber instead of trenching it, but this option comes with its own unique and notable installation, operation, maintenance, and cost challenges as well.

If we simply cannot use optical fiber as the communications medium, what’s the alternative? Wireless.

Wireless communication links have been used for decades in such scenarios where challenging obstacles are located between where your data is and where you want it to go, such as dense urban centers and mountain ranges. This has led to the saying “fiber where you can, wireless where you must”, and is a common mindset in many parts of the network with the communication medium decision based on capacity, performance, cost, security, and often many other factors. It’s not that fiber (wireline) is better than wireless per se; rather, it’s simply a better choice in applications where its unique forecast-tolerant ability to carry essentially unlimited bandwidth is required. Once fiber is deployed, MNOs ride the rapid innovation curve of optical transmission technology and readily upgrade the communication link capacity simply by swapping out the modems.

It’s no secret that as a species, we’ve become highly addicted to our smartphones, as well as the networks that connect us to content that is hosted in distant data centers. This dependence on connectivity shows no signs of abating, quite the contrary. As 4G total data traffic growth continues to grow at close to a 40% CAGR, coupled with the advent of 5G promising 100x more bandwidth and 100x more connected users, man and machine, the backhaul network must continue to scale in capacity well into the foreseeable future. It’s thus quite evident why Mobile Network Operators (MNOs) continue to purchase and roll out fiber, wherever and whenever possible, just to maintain pace with existing 4G and future 5G bandwidth demands.

As radio densification increases, more end points will need to be backhauled. This means MNOs must choose to backhaul over a combination of wireline (optical fiber) and/or wireless links, where the medium decision is based on a combination of factors such as rights of way, installation cost, bandwidth growth, security, and often many more. Optical fiber will always be the first choice, as it carries far higher capacities than wireless alternatives and provide a more forecast-tolerant option. However, due to a multitude of decision-making criteria, in some situations fiber-based backhaul simply doesn’t make sense, but wireless does.

According to Gary Croke, Senior Director of Marketing and Strategy at Aviat Networks, “Roughly 50% of the world’s cellular backhaul is accomplished using wireless technologies1. As we continue to innovate on improving capacity and simplifying operations of wireless transport in preparation for 5G, we see a bright future for the technology. Fiber deployments are growing worldwide and unifying fiber and microwave transport networks is critical to building smarter, better performing networks.”

In short, wireline (optical fiber) and wireless backhaul have and will continue to coexist well into the future, since although the former is often the first choice, in some cases it’s also the impossible choice. Do the two actually compete with each other? Yes, in rare cases where both make equal sense based on a multitude of decision-making criteria, but this situation is quite rare. Wireless and wireline backhaul have and will continue to have their place in today’s 4G and tomorrow’s 5G mobile networks. The decision between wireline or wireless mobile backhaul often comes down to rights of way versus required capacity. 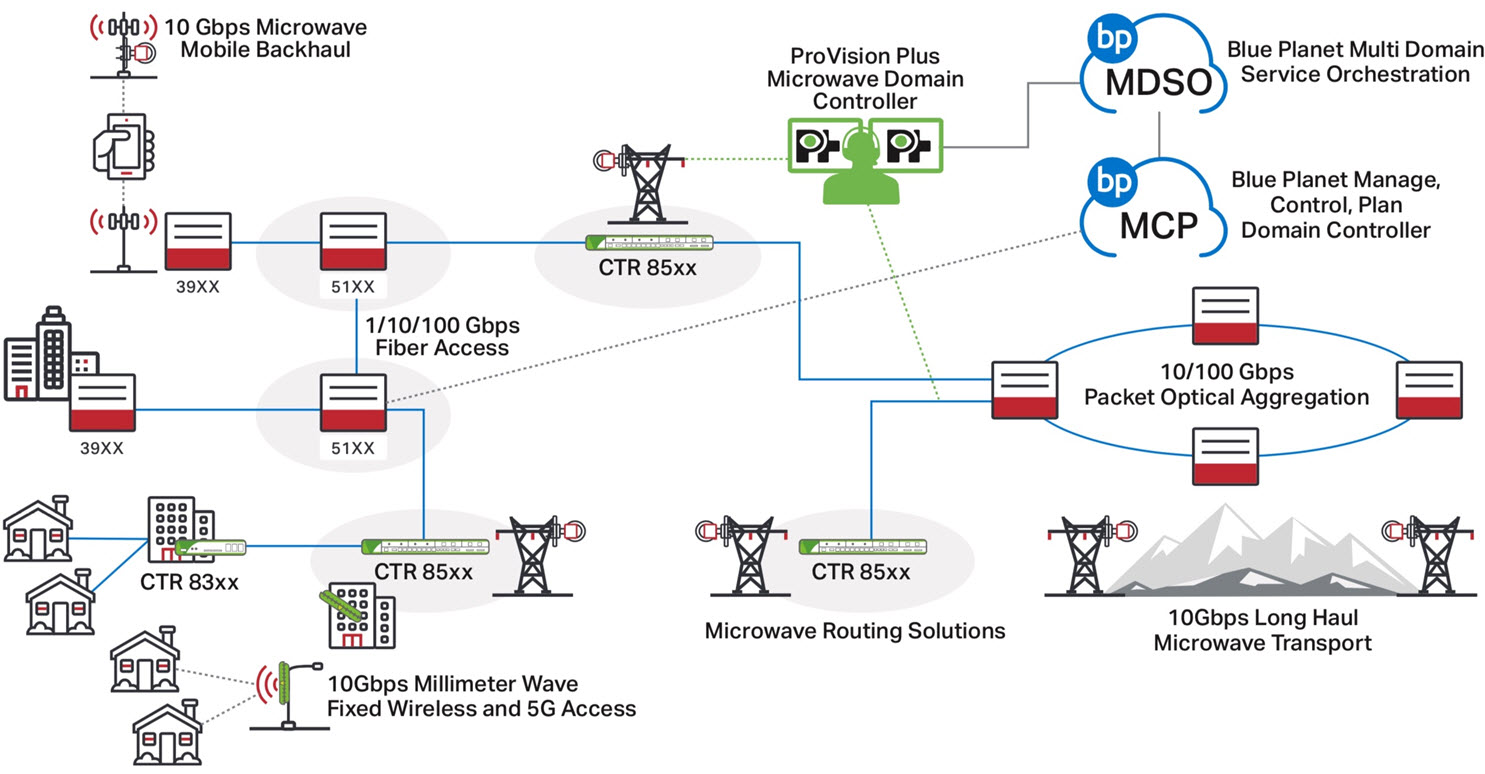 Want to know more about where wireline and wireless mobile backhaul make sense in your network? If so, check out the “5G Converged Optical Fiber and Microwave Transport” white paper where we delve into this topic in much more detail.

Articles
The importance of xHaul for the success of 5G

The future of 5G presents an exciting opportunity for telecom operators in Asia, but transport network considerations and automat ...

Infographics and posters
The Future of Connectivity

Infographics and posters
For the Love of Games - South Korea

Infographics and posters
What’s driving US consumers’ use of broadband and ...

Ciena survey reveals that demand for 5G and cloud is high in the US.

5G, cloud, and edge computing are among the hottest topics in the technology industry. In an era of converging technologies, inno ...

Infobriefs
Private 5G and the Next Generation of Enterprise ...

Enterprises are seeking to improve efficiency and productivity through technologies that merge physical and digital landscapes.

The following Futuriom report identifies a wide range of applications that will require 5G to deliver the best user experience.