How will Cable MSO Networks Keep Up with Massive Change?

Experts say that within the next five years, viewership hours of live linear streaming Over-The-Top (OTT) content will surpass those of traditional broadcast TV. Global OTT content doubled last year to 12.6 billion hours, streamed over more than 2.4 billion devices – mostly from the US at 58% according to Conviva. Okay so I can binge watch my favorite series like the best, but that’s a lot of packets being streamed.

For many families, having Internet access is like having water, electricity, or air – essential for a higher quality of life and greater good for both the developed and undeveloped world. With Content Delivery Network (CDN) traffic expected to reach 72,893 petabytes per month in 2018, video-centric content plays an important part of the network.

When it comes to content, everyone has their favorite must watch, the only thing changing is how and where we watch. 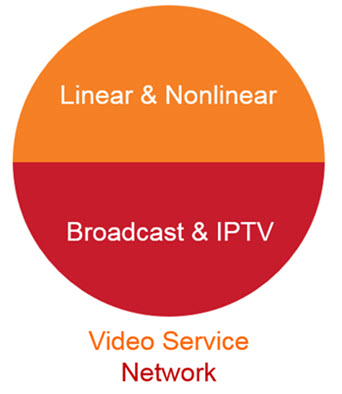 Both linear and nonlinear services can be offered free of charge or payment based. For example, Free-To-Air (FTA) linear television services like Digital Terrestrial Television Broadcasting (DDTB) can be received with only an antenna or through streaming services like YouTube with an Internet connection. In both cases, as unmanaged services, both availability and quality are not part of a Quality of Service (QoS) offering and considered best effort.

The appetite for investing in content is, and will remain, strong because we all want to be entertained.

Managed services offer subscribers, subject to the service and provider, minimum levels of picture QoS and experience. Digital picture quality is always dependent on how and where the source is produced and transported. There are several Digital Television (DTV) formats and variants, including Standard Definition (SD), High Definition (HD), and Ultra High Definition (UHD).

Well, there’s not a simple answer but depending on where you live, transmission standards like National Television System Committee (NTSC), Phase Alternating Line (PAL), and Séquentiel Couleur à Mémoire (SECAM) or French for “sequential color with memory” dictate your experience.

Each region (countries and territories) has their own video and audio variants, excluding SECAM. Here’s a look at the most popular DTV video formats:

DTV enables many different formats (SD, HD, UHD) for both content providers and equipment manufacturers. One major benefit of DTV, over analog, is that it allows multiple programs within the same channel. For most, not only has DTV been the most momentous milestone since color television, it also enabled smart TV.

Smart TV provides both hardware and reconfigurable software applications, essentially combining compute, TV, and STB functions. A Smart TV shouldn’t be confused with IPTV, which is a packet protocol allowing OTT. However, a growing number of subscribers are getting OTT using Internet and WiFi connections.

OTT relies on an Internet connection or broadband service. There are many OTT providers, including Netflix, Hulu, YouTube, content distribution providers, and even most cable operators. However, OTT has been a thorn in cable’s side, causing a steady stream of lost linear video subscribers. Fortunately, broadband is a growing and great revenue source dominated by cable operators, nullifying OTT, at least for now.

With this massive amount of OTT demand, IoT, M2M, and many more new services, it should come as no surprise cable operators have been investing to modernize their cable access network to bring much more bandwidth to the edge. For greenfield, fiber is the order of the day, but for existing infrastructure Fiber Deep will enable Digital Fiber Nodes (DFN) with Data Over Cable Service Interface Specification (DOCSIS) to deliver high-bandwidth to customers.

All this bandwidth will require compact and modular platforms delivering more bandwidth and scalability between hub and headend locations, and between DFN and hubs or headends to reduce space and power. More bandwidth is made possible by advanced programmable coherent optics scalable to over 30 Tbps.

So, are you ready for Fiber Deep?

Well, there’s not a simple answer but depending on where you live transmission standards like National Television System Committee (NTSC), Phase Alternating Line (PAL), and Séquentiel Couleur à Mémoire (SECAM) or French for “sequential color with memory” dictate your experience.

Each region (countries and territories) has their own video and audio variants, excluding SECAM. Here’s a look at the most popular DTV video formats:

Speeding up the Network Edge with Fiber Deep