April 28, 2016
Subscribe Subscribe to Ciena's communications
The MEF's latest Hackathon event is going on this week in Rome. The work this week has concentrated on setting up and configuring MEF services across multiple operators. A team of some 45 participants from 20 companies concentrated on these east-west interfaces, with a to goal to automate the provisioning of MEF services by interfacing with network management systems and/or controllers (some physical, others virtual) to deliver CE2.0 services across a multi-vendor, multi-domain infrastructure. Click through for details.

Round two of the MEF’s hackathon exercise took place this week in Rome at the group’s regular quarterly meeting. It “took place in Rome” only figuratively, as some participants were here, others in Plano TX, Minneapolis MN, Littleton CO, San Francisco CA, Atlanta GA and even Bangalore India. No doubt those not making the trip to this ancient and historic city wish they could have been here, but the fact that they can participate remotely is a testament to the value of the hackathon and of the Lifecycle Services Orchestration (LSO) model they are using. The very nature of the concepts they are testing is again being proven by accessing network assets independent of their geographical location.

The work this week has concentrated on setting up and configuring MEF services across multiple operators. In today’s world where business relies on global network connectivity to access data independently of where it may physically reside, few operators have the network footprint required to access to all possible locations around the globe. For that, they rely on partners to build operator virtual connections (MEF calls them E-Access and E-Transit services) to build an end-to-end service that meets the customer’s needs and deliver the service level agreement required for the given applications.

Building on the work done late last year at the GEN 15 event in Dallas where so-called north-south interfaces were put thru their paces in creating services at the behest of simulated customer applications, this year, the team of some 45 participants from some 20 companies concentrated on the east-west interfaces (between an operator and a partner’s  network) to set up services across an operator interface (an “ENNI” in MEF lingo). This involves exchanging not only the bits and bytes of the data flow itself, but the information needed to set up the handoff and negotiate the parameters and attributes of the service (all defined in various MEF CE2.0 specs).  This matters because in real life, setting up these handoffs can be time consuming and error prone.

The Ciena team in particular concentrated on using a variety of open source artifacts in the growing corpus of open source LSO software alongside the Blue Planet Multi-Domain Service Orchestration (MDSO) to interact with the Blue Planet ONOS-based controller as well as controllers from other hackathon participants. To accomplish this, the teams made use of the Sonata interface being defined as part of MEF’s LSO reference architecture whose role is to facilitate communications between different operator domains.

In this case, AT&T personnel in Plano TX made a request to the virtual infrastructure built in Rome and physical assets housed in San Francisco, to set up a service. In a matter of seconds, the Ethernet service is up and running. The San Francisco lab, hosted by Iometrix, is part of a growing and permanent infrastructure known as MEFNet, being created as a test-bed for use by open source groups and future hackathoners in testing their solutions within the MEF’s OpenLSO and OpenCS initiatives.

But this week’s goal is to automate the provisioning of MEF services by interfacing with network management systems and/or controllers (some physical, others virtual) to deliver CE2.0 services across a multi-vendor, multi-domain infrastructure. This reinforces a key theme of the Blue Planet value proposition having to do with breaking silos that have traditionally added delay and cost to the operator, and frustration to the network end-user.

In an ongoing collaboration with CenturyLink, the Ciena team also leveraged work done previously (back at GEN 15) that used the Presto interface (another component of the MEF LSO reference model) to accept connectivity requests from an application in need of bandwidth, translate these into something the operator’s network equipment could understand, and fulfill the request virtually instantly. So this week completes the inter-operator picture whereby the Sonata interface makes the request from one operator to another, and the Presto interface is used to “push” the right commands and configuration to the network elements and functions below  (again, some physical, some virtual) creating the end-to-end service.

So what’s next for the hackathon guys? Well the code created this week becomes a building block for additional capabilities at future hackathons (the MEF 16 event coming up on Baltimore for example) or by other open source groups such as ONOS, OPNFV, or OpenDaylight. The goals may change to reflect the progress the industry has made, but the overall aim is the same – to kick the tires of the MEF LSO model and create real learning that the industry can apply to future services. 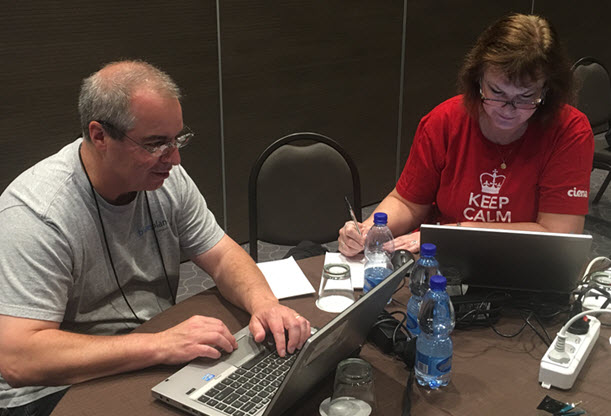 Defending the smart city: 3 aspects to a holistic security approach