GEN15: What the heck is a hackathon?

John Hawkins
Ciena’s resident Carrier Ethernet expert
Subscribe Subscribe to Ciena's communications
Why is the venerable MEF, bastion of all things Carrier Ethernet, encouraging folks to show up at next week’s GEN15 show in Dallas for something called a hackathon? The idea is to show how realistic it is to use the various Lifecycle Service Orchestration (LSO) concepts promoted by MEF to create cool applications based on MEF specs.  Ciena's MEF and Carrier Ethernet expert John Hawkins explains.

Ciena’s John Hawkins (@EtherJohn) is one of the industry’s foremost experts on Carrier Ethernet technology. He has held leadership positions for a variety of IEEE and MEF committees, and is currently overseeing the MEF’s work on Carrier Ethernet and the Cloud.

I realize I may be getting old, but in my day, hacking wasn’t necessarily a good thing. “My network was hacked today,” wasn’t something you proudly brought up at dinner parties. So, then, why is the venerable MEF, bastion of all things Carrier Ethernet, now encouraging folks to show up at next week’s GEN15 show in Dallas to something called a hackathon? Is that a good thing?

As it turns out, yes!

The idea is to unleash the creativity of talented developers in the community to create innovative software applications that automate and streamline the use of MEF CE2.0 services. With the current trend towards DevOps and open-source code development, there is renewed interest in building carrier Ethernet services that are more agile and flexible. However, this hackathon concept differs from other MEF-sponsored events at GEN15, such as the Proof of Concept (PoC) showcase where you show off the latest cutting edge innovations from your lab. Ciena participated in a PoC with CenturyLink at GEN14, and will again this year with Colt.

The output from the hackathon event is more “real time” and will be more than just lines of if-then-else statements (FORTRAN anyone?). The intent is to show how realistic it is to use the various Lifecycle Service Orchestration (LSO) concepts promoted by MEF to create cool applications based on MEF specs. 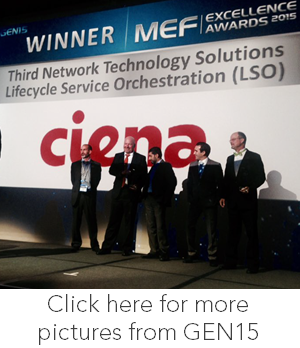 One of the key target areas of the GEN15 exercise is the Service Configuration and Activation (SCA) project sponsored by the Service Operations Committee of MEF. The project has defined a framework to configure and activate Carrier Ethernet services based on REST APIs. The intent is to allow carriers, equipment vendors, and third party integrators to implement MEF services, configure them and manage them across multiple technologies and multiple vendors—hence the hackathon.

The best and brightest have been invited to leverage their creativity and resourcefulness to demonstrate innovative and useful apps to interact with a user, stand up a service, configure its attributes, and manage its ongoing performance. Ciena’s effort has counted on participation from a variety of internal teams ranging from R&D, professional services, legal, and marketing in order to field the right on-site support for the event. We expect to not only learn a lot, but also show off our LSO chops at the same time.

In the context of raising the conversation above the bits and bytes, this (and future) hackathons are an opportunity to demonstrate the exact attributes MEF touts for its Third Network: that is, services that are agile, assured, and orchestrated. We network types are often guilty of dwelling in the bits and bytes (and rightfully so), but this sort of user-community exercise where actual tools are built on top of those networks is highly effective at answering the “so-what” questions that come up in our customers’ minds.

In this edition of the insights: Learn how automation tames the complexity of end-to-end 5G network slicing. Understand the key c ...

Articles
Leading as your true self

In honor of Pride Month, Nicky Martin reflects on being a role model for others by being her true self at work and in every aspec ...