Don’t sell it short: 200G can extend far past the metro

September 22, 2015
Rick Dodd
Subscribe Subscribe to Ciena's communications
Data Center Interconnect (DCI) isn't just about the metro anymore.  That's why today we’re unveiling new capabilities that extend our Waveserver platform into long haul applications.  We’ve added new higher-performance optics to the platform and take advantage of the incredible performance of our WaveLogic 3 Extreme chipset to get more capacity at any distance than you can get from any competitor’s system.  Rick Dodd, Ciena's SVP of portfolio marketing and strategic markets development, has all the details. 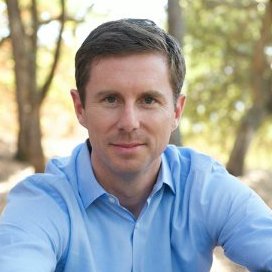 Back in May, we introduced Waveserver, a new stackable data center interconnect system which combined a web-scale IT operations paradigm with Ciena’s best-in-the-world WaveLogic optical technology.  We loved the positive response from the market as people recognized it’s a fantastic way to connect data centers in the same city with massive optical pipes.

But guess what—not all data center interconnect (DCI) happens within a metropolitan area.  You may want to tie your data center in Washington to your Silicon Valley data center, and why wouldn’t you want the same simplicity, openness, and scale you get from Waveserver for those links as well?

That’s funny, we had exactly the same idea.  And that’s why today we’re showing off new capabilities that take Waveserver into long haul applications.  We’ve added new higher-performance optics to the platform and take advantage of the incredible performance of our WaveLogic 3 Extreme chipset to get more capacity at any distance than you can get from any competitor’s system.

Here’s some detail: Waveserver uses 16QAM modulation to carry 200Gb/s per wavelength of light.  Some folks in the industry will tell you that 16QAM is just for the metro, but that’s just because they don’t have Ciena WaveLogic silicon.  We’ve got customers who run 1000km, on real networks, using Wavelogic 3 Extreme. That’s more than the distance from Chicago to Atlanta-- not exactly metro if I’m reading Google Maps correctly.  If you had Raman amps and some of the new ULL fiber, you could do 2000km+. 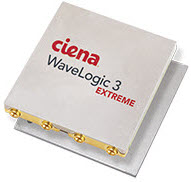 If Waveserver can drive 200G on a link with 16QAM, and the competition has to close that same link with QPSK, Waveserver delivers 2x more bandwidth, 2x better density… you get the idea.

Check out our video and you’ll see we’ll do not just 16QAM (for 200G), but 8QAM (for 150G) as well.  And for that matter good old QPSK for 100G.  Adding 8QAM to our modulation portfolio is a big deal because it allows greater-than-100G capacity for some of the longest links out there.  But the real beauty comes from having all three modulation formats delivered by the most advanced coherent implementation on the planet: WaveLogic 3 Extreme.  The way we do spectral shaping, recovery, forward error correction, even the way we do analog to digital conversions gives you the most possible capacity, whatever your distance, without leaving lots of optical margin on the table.

There’s one more cool thing worth mentioning: WaveLogic technology has always been about not just bigger bandwidth, but also smarter bandwidth.  And this is where the on-demand paradigm so common in web-scale and cloud environments comes into play.  When you connect Waveserver to a fiber, its WaveLogic 3 Extreme chipset starts probing that fiber, and it figures out exactly the optical characteristics and how it can best exploit them.

Think of it like the computer on a jet that considers how much fuel is on board, how far is the destination, whether there are headwinds or tailwinds, and figures out how fast the jet can fly and make the destination safely.   We’re showcasing a similar idea on Waveserver whereby it calculates the maximum bandwidth it can drive and still deliver your traffic to the other end.

Maybe you had planned to run 8QAM on an 1100km route, but Waveserver figures out you’ve got the ability to run at 16QAM.  That gives you an extra 100G of capacity with zero new hardware.  Do you want to take that deal?  Click OK to confirm and Waveserver makes it happen.

All in all, the open, programmable, scalable approach we introduced with Waveserver for metro networks now comes to long haul networks as well.  And because there’s WaveLogic 3 Extreme under the hood, you’ll get more capacity, whatever the distance, than you’ll get with anyone else’s coherent.  We’re just about as excited as an erbium ion in an optical amp, and hope you are too.