Bo Gowan
Director, Social Media
Subscribe Subscribe to Ciena's communications
Ciena has unveiled two new coherent chipsets that represent the latest innovations with our WaveLogic 3 technology.  Consider the bar raised. Our new WaveLogic 3 Extreme and WaveLogic 3 Nano aren’t just another 100G coherent chipset. While they build upon the industry-leading features of our workhorse WaveLogic 3 coherent chipset, they represent a focus on addressing the needs and pain points of specific network deployment scenarios. Read on for all the details.

This is the third in a series of blog posts detailing Ciena’s new products and solutions tailored for a new web-scale world.  Other posts in the series:

Ciena pioneered the use of coherent technology for commercial optical systems. We were the first to deploy 100G coherent in a live customer network. And if you strung together all the coherent optical fiber that has ever been deployed using our gear we would almost be to Mars by now.

In other words, we really know our coherent technology.

Last week, we unveiled the culmination of all that experience with the introduction of two new coherent chipsets that represent the latest innovations with our WaveLogic 3 technology.  Consider the bar raised.

Our new WaveLogic 3 Extreme and WaveLogic 3 Nano aren’t just another 100G coherent chipset.  While they build upon the industry-leading features of our workhorse WaveLogic 3 coherent chipset, they represent a focus on addressing the needs and pain points of specific network deployment scenarios.

Ciena’s new WaveLogic 3 Extreme coherent chipset builds on the capabilities of WaveLogic 3 and provides extreme performance for all coherent networking applications through the use of additional modulations and enhanced mitigation of both linear and non-linear impairments.

It features four coherent modulation formats -- QPSK, BPSK, 8D-2QAM and a second generation 16QAM – the last two of which are new to the WaveLogic 3 family. 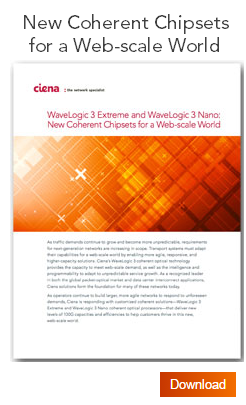 But what 16QAM gives you in bandwidth and spectral efficiency, it takes away in transmission distance.  That’s why you generally hear people talk about 16QAM as a metro transmission technology.

A unique aspect of Ciena’s second generation 16QAM technology is its ability to stretch to regional distances. This is accomplished via the chipset’s enhanced digital signal processing (DSP) capabilities that allow us to deploy 16QAM in network spans that stretch to 1,400km.

With this capability, WaveLogic 3 Extreme with 16QAM modulation provides significant economic and performance benefits for metro and regional networks and data center interconnect (DCI) where high capacity is of utmost importance.

The second new modulation format built into WaveLogic 3 Extreme is 8D-2QAM, a format that we previously detailed in this blog post from the PTC’15 conference.

But 8D-2QAM’s unique characteristics reduce the interactions between adjacent wavelengths and opposite polarizations of the same wavelength – called non-linear impairments.  This significantly reduces the signal degradations which occur over very long transmission distances and mitigates their impact on capacity and reach.

This results in an increase of up to 20% in span distance, and an increase in the number of wavelengths that can be supported per fiber span.  In fact, in a recent announcement, Southern Cross saw an 85% increase in total line capacity over its current technology when using WaveLogic 3 Extreme with 8D-2QAM and Flexible Grid technology.

WaveLogic 3 Extreme is available today, and has already been deployed in a regional scenario with Verizon and in multiple submarine scenarios announced last month.  The chipset is being integrated into line cards for Ciena’s 6500 and 5430 Packet-Optical Platforms.

For more on the features and capabilities of WaveLogic 3 Extreme, watch this Chalk Talk session with Ciena’s Michael Hubbard (at right).

Ciena’s second new coherent chipset, WaveLogic 3 Nano, is targeted directly at the growing focus on deploying 100G in metro networks.  WaveLogic 3 Nano was purpose-built to solve the 100G metro density challenge: reducing the footprint and power consumption of the coherent 100G design to fine-tune it for high-density metro deployments.

So how exactly is that done? With WaveLogic 3 Nano, we’ve actually combined the coherent transmitter and receiver into a single ASIC chip, resulting in a a chipset with half the footprint and a quarter of the power requirements. In addition, the chip’s electro-optics were shrunk and Ciena’s engineers tailored the chromatic dispersion characteristics of the chip specifically for metro and regional distances. 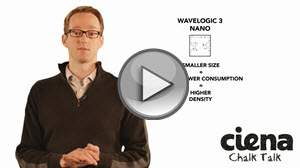 All this shrinking and tailoring doesn’t mean a reduction in performance.  In fact, Ciena did some adding for WaveLogic 3 Nano as well, providing increased tolerance to phase noise.  This allows for the maximum number of 100G wavelengths to be placed alongside 10G wavelengths on compensated networks, a key feature as metro networks migrate from 10G to 100G.

WaveLogic 3 Nano is being initially implemented on Ciena’s 6500 and 8700 platforms, and will be available in the next few months. For more on the features and capabilities of WaveLogic 3 Nano, watch this Chalk Talk session with Ciena’s Will Leckie (at right).

The latest coherent technology on display at OFC 2015

Still want to know more, this white paper is a good place to start. Also, later this month you’ll see both of these new WaveLogic 3 chipsets in action at the OFC 2015 conference in Los Angeles. You’ll also get to talk with some of the folks that helped directly in the development process.  Until then, feel free to ask us any questions in the comments section below.

The Metro gets a brand new 100G architecture option

Infographics and posters
Marketing as a Service (MaaS) Infographic

Learn more about the Ciena Partner Network's Marketing as a Service program.

In this edition of the insights, learn the six key partner attributes linked with network transformation success, see what Ciena ...

Learn more about the role of automation, virtualization, and cloud in simplifying and streamlining network management

Infographics and posters
Top 6 attributes to look for when selecting a tra ...