Bo Gowan
Director, Social Media
Subscribe Subscribe to Ciena's communications
Ciena today announced significant new additions to its product and solution portfolio, with the unveiling of a trio of innovations that drive significant increases in network capacity and agility. The new additions announced today include: two new members of Ciena’s WaveLogic 3 coherent optical chipset, the WaveLogic 3 Extreme and the WaveLogic 3 Nano; the introduction of Coherent Select, a completely new 100G photonic architecture that uses the intelligence of coherent optics to bring simplicity, flexibility and economy to the network edge; and the addition of the new 3904 and 3905 Service Delivery Switches to Ciena’s packet portfolio, tailored to the needs of small cell mobile backhaul. These new additions embrace the new web-scale dynamic that is significantly changing the evolution of today’s network architectures, driven by the growing adoption of cloud computing, network virtualization and openness. Click through to the blog post for more on today's new product and solution announcements.

This is the first in a series of blog posts detailing Ciena’s new products and solutions tailored for a new web-scale world.  Other posts in the series:

Ciena today announced significant new additions to its product and solution portfolio, with the unveiling of a trio of innovations that drive significant increases in network capacity and agility.

The new additions announced today are:

These new additions embrace the new web-scale dynamic that is significantly changing the evolution of today’s network architectures, driven by the growing adoption of cloud computing, network virtualization and openness.  On March 11th, Ciena will host a webinar to detail these innovations.

Leading off today’s news is the unveiling of two new Ciena WaveLogic 3 coherent optical chipsets, the WaveLogic 3 Extreme and WaveLogic 3 Nano. While both are targeted at the massive bandwidth requirements of web-scale networks, they are uniquely tailored to address specific top-of-mind concerns within the network.

WaveLogic 3 Nano, Ciena’s second new coherent chipset, represents the next progression of our WaveLogic 3 technology for metro and data center applications.  WaveLogic 3 Nano was designed to solve the 100G metro density challenge: reducing the footprint and power consumption of the coherent 100G design to fine-tune it for high-density metro deployments.

That means shrinking the electro-optics to enable lower power consumption, taking advantage of new ASIC integration technologies, and tailoring the chipset’s chromatic dispersion compensation characteristics for metro distances – all designed to create a 100G coherent solution that is custom tailored for metro economics.

The new WaveLogic 3 Nano chipset is being implemented across Ciena’s portfolio of converged packet-optical and packet networking products.

As operators look to evolve their 10G access and metro networks to 100G, they are also considering how to transform their architecture to add the flexibility required by a software-defined world, but do so with more focused metro economics. Network operators generally have only two photonic architecture options in today’s world. They can use passive fixed optical filters that are simple and low-cost, but lack automation and are very inflexible. Or they can deploy a ROADM architecture that offers full mesh flexibility and remote configurability, but comes with a sometimes prohibitive cost for wide-scale deployment, especially in access and metro scenarios.

Coherent Select consists of a wavelength broadcast and select architecture which leverages WaveLogic coherent receivers to tune to the frequency (wavelength) of interest. It also retains much of the operational benefits associated with ROADMs, including automatic real-time power balancing, full photonic topology visualization, and remote wavelength reconfiguration with colorless, directionless and flexible grid capabilities (see Coherent Select architecture diagram below). 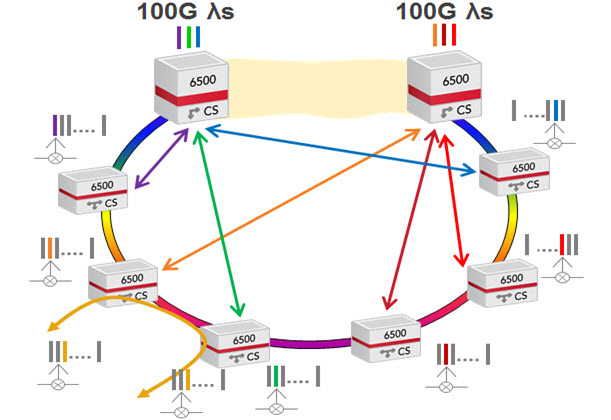 The web-scale world means massive mobile consumption, as it is increasingly the method of choice for accessing content residing in web-scale data centers. With peak mobile bandwidth set to increase fivefold over the next three years, mobile networks are under immense pressure to add capacity and improve coverage. Small cells are part of the solution, with some estimates that over 700,000 small cells will be deployed worldwide within the next few years. 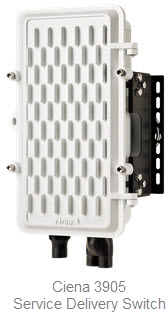 To that end, Ciena today expanded its Packet Portfolio with the additions of the 3904 and 3905 Service Delivery Switches, tailored specifically for both indoor and outdoor small cell mobile backhaul. The 3905 is an environmentally hardened Ethernet platform for that can be deployed in a variety of mounting options.  The 3905, as well as its indoor variant 3904, is purpose-built to provide next-gen Gigabit Ethernet (GbE) connectivity from the small cell to the macro tower or Mobile Telephone Switching Office (MTSO).

With so much unveiled today, it’s clear that we’ll need more than one blog post to cover it all.  Over the next few weeks we’ll have a series of blog posts that delve into the individual details of each part of the news.  And below we’ve linked to a variety of additional materials so that you can dig deeper into the specifics. 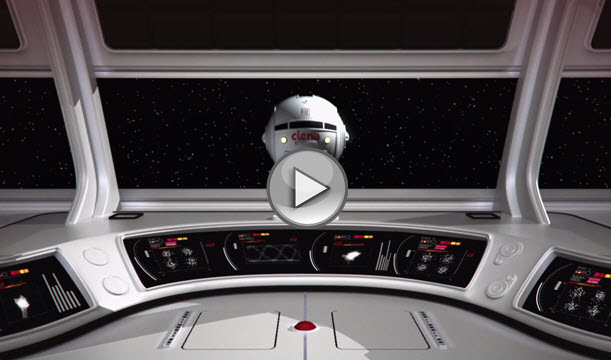 Videos
Supporting Cities to Get Smarter and More Connect ...

At the Fiber Connect 2022, Ciena won the Game Changer Award for our Proof-of-Concept (POC) with Plume, and Benu demonstrating how ...

In this edition of the insights: Gain an industry view on how analytics can help the convergence of IP and optical network layers ...

Infographics and posters
Is the Middle East ready for a virtual working wo ...

Research commissioned by Ciena reveals that 78% of global business pros are ready to use more immersive virtual platforms.

Infographics and posters
Are we ready for a virtual working world?

A new global study commissioned by Ciena has uncovered just how ready business professionals are to collaborate in the virtual wo ...

IP and optical network layers are converging, providing new challenges to the operations teams tasked with managing them. To get ...

In this edition of the insights: Learn the ways Ciena is helping improve residential broadband and driving digital inclusion. As ...