June 19, 2019
Subscribe Subscribe to Ciena's communications
Ciena’s CEO of almost 20 years has been honored by one of the world’s largest job and recruiting sites in this annual award with a 97% approval rating. 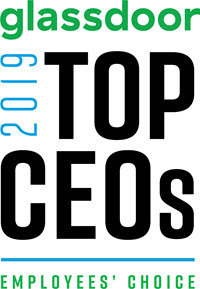 Ciena’s longstanding President and CEO, Gary Smith, has been named a Top CEO in Canada by Glassdoor, one of the world’s largest job and recruiting sites, in its annual award highlighting the Top CEOs in several countries throughout North America and Europe.

Among chief executives recognized by employees in Canada, Gary Smith received an impressive approval rating of 97% based on the anonymous and voluntary reviews Ciena employees shared on Glassdoor throughout the past year.

Article
Ciena takes home 2019 Leading Lights’ Company of the Year Award
Gary has spoken in the past of his belief that if you embrace and authentically prioritize getting the “people thing” right, you dramatically increase your organization’s chances of success. This has been a guiding principal as he has led Ciena for almost 20 years and to the success the company is seeing today.

He also feels that leaders should communicate with genuine passion, transparency, candor, consistency and with humility and humor. But that the real art of leadership is communicating through listening. Which is why he recently took the step of working with Ciena’s Human Resources team and employee managers to replace the once-a-year employee reviews. Instead Ciena now encourages an environment of altogether better, more frequent and more candid conversations between team members. The goal of these better and more frequent conversations is to enable employees to gain hugely valuable and timely insights into what is really happening at Ciena, and within their own teams, to foster additional growth and success.

“It’s an honor to recognize incredible leaders who, from their employees’ perspectives, exemplify exceptional vision, trust and communication. Glassdoor’s Top CEOs award continues to be more competitive every year, and I congratulate each leader on their achievement,” said Christian Sutherland-Wong, Glassdoor president and chief operating officer. “Today’s job seekers are looking for leaders who share their values and will empower them to bring their full selves to work. More and more, we’re seeing Top CEOs make decisions to shape the culture of their organizations to help recruit and retain quality talent, which has a direct correlation to fueling business success.”

CEO approval ratings are gathered through Glassdoor’s online company review survey, which gathers current and former employee sentiment about job and company satisfaction, the work environment and the culture. Employees are asked to rate a number of workplace factors like compensation and benefits as well as work-life balance, and asked whether they approve, disapprove or are neutral about the job their CEO is doing. In addition, employees are asked to describe some of the upsides and downsides of working for the company and provide any advice for senior management. Among the approximately 900,000 companies reviewed on Glassdoor, the average CEO approval rating is 69 percent.

For the complete list of all Glassdoor Top CEOs winners in 2019, please visit: https://www.glassdoor.ca/Award/Top-CEOs-Canada-LST_KQ0,15.htm