October 15, 2018
Raghu Ranganathan
Network Architecture
Subscribe Subscribe to Ciena's communications
Telecom Infra Project (TIP) has recently started an E2E slicing Working Group to investigate models and mechanisms to demonstrate E2E network slicing at scale in real world scenarios. Ciena’s Raghu Ranganathan, explains more about this use case and details a demonstration Ciena will be participating with BT, i2cat and TSSG at the TIP Summit in London this week.

To cost effectively support the next generation of user applications and disaggregated network functions, a richer connectivity structure is needed across a multi-domain global virtual fabric consisting of different types of operators and public cloud domains. The connectivity structure in each end-to-end (E2E) slice of the fabric will also need to be adaptive depending, of course, on context such as application behaviors as observed by users or network behaviors desired by operators. For this, a programmable network fabric is one key tenet of Ciena’s Adaptive Network vision.

Orchestrated mechanisms, such as with Ciena’s open source-based Blue Planet software, could be used to automate the creation of an E2E slice. Indeed, one such example was demonstrated in a MEF 17 Proof of Concept (PoC) using MEF Lifecycle Service Orchestration (LSO) Application Programming Interfaces (APIs). MEF’s work on Service Models helped to contain the automation challenges to within a given Operator domain. Additionally, ONF’s Core Information Model for packet and optical connectivity layers with one architecture pattern - Forwarding Construct (FC) and Logical Termination Point (LTP) classes - can significantly simplify automation albeit the layers themselves can be with different protocol mechanisms. The ONF Model can be recursively used in each of the subnetwork domains of an E2E slice. For example, MEF work has used this connectivity service model for Ethernet and Optical layers at the MEF LSO Presto reference points for deploying a MEF Service across domains of a given operator.

Operators are facing the complex task of service chaining a disaggregated 5G network as containerized microservices in a cloud-native deployment along with distributed compute. User devices and IoT endpoints would also want on-demand association to a slice with application servers that might be at the edge closer to user or at a core public cloud. Programmability of an E2E slice in the fabric now expands to both an overlay layer, e.g., associating endpoints at containers/virtual machines, and underlay layer(s), e.g., packet optical networking. The bigger challenge now to composing an E2E slice seems to be mostly in overlay networking given the expected dynamic nature and Linux processes for virtual machine (VM)/containerized workloads executing on host Operating Systems. So, the present mode of operation with, for example, Ethernet Virtual Private Network (EVPN) over IP using Virtual Extensible LAN (VxLAN) or Generic Routing Encapsulation (GRE), etc., may not be the best answer.

What if semi-autonomous mechanisms were additionally used for overlay networking of Linux processes in a slice?

Telecom Infra Project (TIP) has recently started an E2E slicing Working Group to investigate models and mechanisms  to demonstrate E2E network slicing at scale in real world scenarios. Led by BT, Ciena along with TSSG and i2Cat, have proposed one use case - Multi-Operator “IPC” VPN Slice - to apply RINA concepts for overlay networking. This use case plans to identify enhancements needed to orchestration and/or autonomous mechanisms to simplify the automation of E2E network slice. 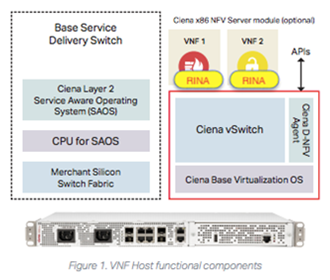 To demonstrate this use case, Ciena has included 3906 Service Virtualization Switches in the test bed with compute, connect and store capabilities to simulate the required spine-leaf underlay and Inter-Process Communication “IPC” VPN overlay. At this time, a prototype RINA stack has been used as part of the kernel to associate VM processes in different nodes to map application flows, eg., video from edge or core data center based on network state or other policies, over Distributed IPC Facilites (DIFs). The DIFs for desired scope and Quality of Service (QoS) were then mapped to the underlay Virtual Local Area Network (VLAN) classes of services forwarded across a spine-leaf Wide Area Network (WAN).

This use case will be shown at the TIP Summit (October 16/17) in London, UK. This work was a collaboration with: Karthik Ramanarayanan, David Bainbridge and Kaniz Mahdi of Ciena; Andy Corston-Petrie of BT, Eduard Grassa Gras of i2Cat, Miguel Ponce De Leon of TSSG.