Behind the scenes with Ciena’s corporate rock band

You can see the concentration on Chuck Kaplan’s face as he strums the beautiful guitar his friend and fellow band member Paul Bullock handmade for him.  Chuck is the VP of Ciena’s Industry Marketing team by day, but right now he’s also practicing his part as the rhythm guitarist in OTN Speedwagon, Ciena’s official corporate band. 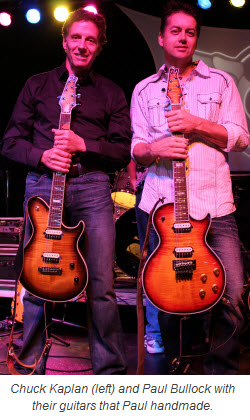 Like the rest of the band, Chuck is using every spare minute to prepare -- and right now he’s working on matching Paul’s rhythm for a song that will be on the performance playlist.  But Chuck and Paul aren’t practicing together; Chuck is playing along to a recording that Paul and several others in the band made during their last practice session.  That’s because Chuck is based in Atlanta, Georgia, and Paul is 800 miles away in Dallas, Texas.

In fact, OTN Speedwagon’s 12 band members – all Ciena employees – are based in ten different cities across three countries (US, Canada and UK).  So how does a band like this, that manages to get all 12 members in the same place at the same time on only a few special occasions per year, end up as one of eight finalists in the FORTUNE Battle of the Corporate Bands?  Like Ciena, they have become adept at using technology to connect over long distances.  Here’s the story…

We’re as good as that band

The idea for an all-employee band was formed in late 2007 at Ciena’s annual sales conference. “We were listening to an average performing band that had been hired as the event’s evening entertainment, and a few of us said ‘we can do better than that’,” says Chuck Kaplan, who is one of four of the band’s remaining founding members.

Linda Cote is another – senior director of Ciena’s global customer training delivery teams by day and a lead vocalist in the band. “We approached our CTO Steve Alexander with the idea of a company band and he loved it.  So the next step was finding enough members to fill out the band.” 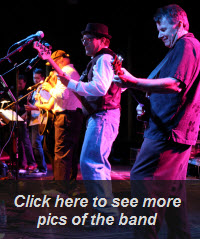 By the following year, the band had a name (OTN Speedwagon: a play on OTN technology and the popular rock band REO Speedwagon) and had landed its first gig as the featured entertainment at Ciena’s next annual sales conference.

“After getting past the notion that this could be worse than a junior high school talent show, our sales leader agreed to give us a shot,” says Chuck.

But with members scattered around the world, the band had only a few days of practice together to get ready for its debut act.  And for some members of the band, that first group practice was also the very first opportunity to meet face-to-face.

Amanda Pitman, based in the UK, was (and still is) one of the band’s three lead singers.

“I had never met Amanda, and we didn’t sing together for the first time until two days before our first performance,” says Linda. “We literally walked in the room and started harmonizing together.”

“We practiced for two solid days to get ready for our performance on the third day of the sales conference,” says Chuck. “Somehow it all came together and we were a hit.”

As Ciena grew, so did OTN Speedwagon.  The 2010 acquisition of Nortel’s MEN business brought in more band members from more cities.  The band eventually grew more diverse to 12 members, with job responsibilities that ranged from sales engineers to the director of IT to a VP of legal. “When we get together as a band, we leave our titles at the door,” says Chuck.

And with each new member came a new place on the map.  The band knew that to be successful, it had to find a way to overcome the great distances between band members.

“What has developed and evolved in the group over the last six years has been a process of using technology like centralized storage, where all of us practice independently but to the same shared music files,” says Chuck. “Then when we all come together in the final practices before a performance, it’s not nearly as crazy as it was in the first few years.”

Chuck calls it the ‘Dropbox concept.’

“We often have to change the original key of a song to best match our lead vocalist on that song, and Bob Rodio (Bass/vocals) creates a new master of the song that is shifted to the new key,” says Chuck. “Then we can all practice remotely in the right key.”

“All the guitar players, singers and other band members will work out who plays or sings which part of the song, and then we practice them independently,” says Linda.  “When we come together we are executing on our individual parts, and if we’ve all done our homework it gels.”

The band also takes advantage of when just a few members are in the same city at the same time.

“Most of us were able to rehearse in Dallas just a few weeks ago, and we practiced a whole set of songs that we’ve never played before,” says Linda. “With the individual preparation we put in, we literally had it in one take with many of the songs.”

At practice sessions where the entire band can’t make it, a recording of the session will be placed on the shared server for the entire band to access.  Each band member can then practice his part in sync with the recorded session.

The FORTUNE Battle of the Corporate Bands

This year, OTN Speedwagon has taken on a new challenge, entering the FORTUNE Battle of the Corporate Bands.  The competition started early this year with prospective bands submitting demo sessions for consideration.

Overall, the FORTUNE Battle judges selected 19 bands for the competition, and OTN Speedwagon was placed in the Southern Division semi-finals in Nashville, which were held in July. 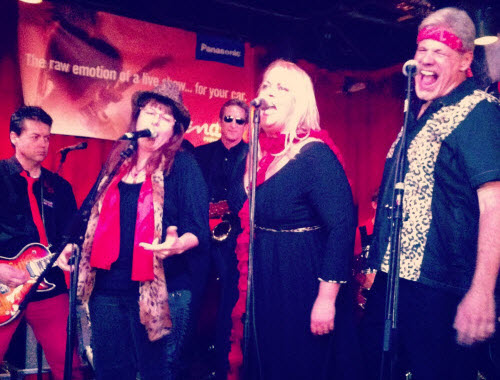 “We were ecstatic to hear that we had made it into the competition,” says Linda, who has managed the band’s participation in the competition from the start. “We have always had great feedback from Ciena employees that they loved our performances, but to be selected to go to Nashville was a whole new level of validation for us.”

In the Nashville semis, the band played a diverse mix of music as part of its set, spanning Aerosmith (Walk this Way) to Steely Dan (My Old School) to Bruno Mars (Runaway Baby).

“That entire weekend in Nashville was the most fun we have had in a long while,” says Chuck. “The degree of bonding in the band has made this one of the most special fellowships that any of us has been a part of.”

But even with the team bonding and a great live performance, the band didn’t get the news they wanted to hear – at least not initially.

Two other bands were picked by the Nashville judges to move on to the finals.  But there was still hope. “One of the Hall of Fame judges came up to us after the finalists were announced and told us to ‘hang in there’ because two wild card selections would be made from the best of the three regional competitions," says Chuck.

In early August, the band got the news that they were one of the wildcards.  They were one of eight finalists that were going to play at the Rock and Roll Hall of Fame.

Dispersed across ten cities and three countries, they celebrated together the only way they could: via an email chain.  Exclamations of “Woohoo!!!” and “Pack your bags!” bounced back and forth among email inboxes thousands of miles apart.

Getting ready for the big gig

And that’s how we got to where we are today, with Chuck Kaplan strumming his guitar to the band’s recorded rendition of Heart of Rock & Roll by Huey Lewis and the News.  With just a few weeks to go until the big gig, the band is taking every opportunity to prepare for the performance of its life.

A few weeks ago, the team opportunistically seized on a chance to get in a full day’s practice in Dallas, hosted by band member Paul Knudsen, who had enough equipment of his own to support the whole band.  The group will also show up a day early in Cleveland for a final walk-through before they go on stage.

No matter what the results of the finals, everyone in the band realizes how special this experience is.  “We’re going to play at the Rock and Roll Hall of Fame,” says Chuck, still seemingly only half believing it. “How amazing is that?”

Almost as amazing as the band itself.