Helen Xenos
Senior Director, Portfolio Marketing
Subscribe Subscribe to Ciena's communications
The adoption of 400G is ramping up. Ciena’s Helen Xenos takes a look at how this compares with adoption rates of technology in the past and how operators are already using it today.

While we hear about how the networking environment is becoming increasingly dynamic and fast-paced, nothing makes this more evident than when we look at how new technology adoption rates have accelerated over the last few years.  While 400Gb/s-capable technology was only made available to the market in the latter half of 2017 with Ciena’s WaveLogic Ai, it is ramping three times faster than 100G when it was introduced in 2010, with early announcements from major service providers like Telstra, Unitymedia and Vodafone New Zealand.

A look back in time

It took the industry 4.5 years to deploy 5,000 40G transponders. Initial deployments in 2006 used direct detect receiver technology, and the first coherent solutions were introduced to the market in 2008 with WaveLogic chipsets. 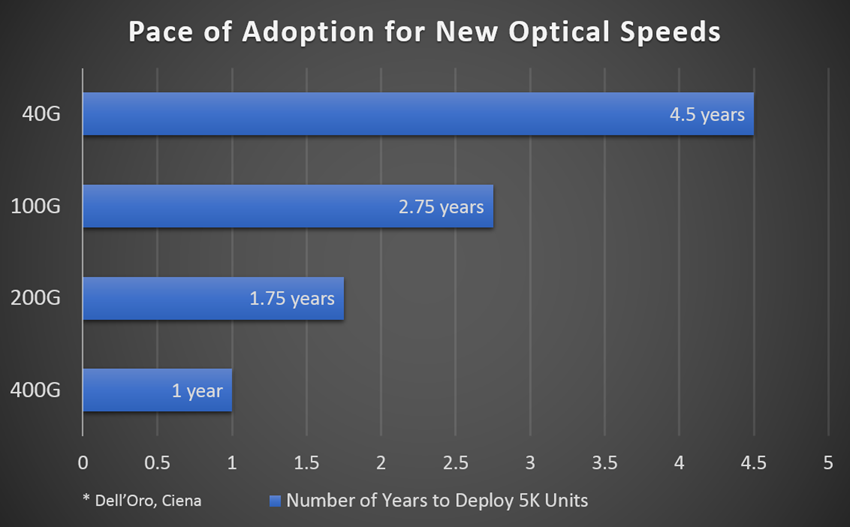 The pace of early technology adoption accelerated even further with 200G-capable solutions, and the initial ramp period reduced to 1.75 years for these solutions, which also introduced the concept of “programmable capacity” to the industry. 200G-capable solutions operate at 100Gb/s for long haul applications, and double the capacity to 200G for metro distances.  A key driver for the acceleration in technology adoption rate was data center interconnect in Internet Content Provider networks.

Significant technology changes are needed to achieve single-wavelength 400G operation. The coherent modem operates at a higher baud rate to process more symbols per second, and more advanced modulation schemes are implemented, using more dense constellations, to support more bits per symbol. The higher baud rate signals require larger spectrum, which means they require flexible grid or 100GHz systems, where the majority of systems today are implemented with fixed 50GHz channel spacing.  Even with these factors at play, the rate of technology adoption continues to accelerate, and 400G-capable solutions are expected to take less than 1 year to ramp to 5,000 deployed transponders - 2-3 times faster than 100G.

The rate of technology adoption continues to accelerate, and 400G-capable solutions are expected to take less than 1 year to ramp to 5,000 deployed transponders - 2-3 times faster than 100G.

The popularity of WaveLogic Ai, and new 400G-capable technology in general, lies in the fact that it changes the “unit of currency” for capacity that is deployed in networks today.  200G replaces 100G as the new standard for long haul applications, 300G can now be deployed for 1000km distances, and 400G for shorter reach, metro or DCI distances.  Capacity can be adjusted based on the distance of the application. As we recently announced with Telstra and Ericsson, this programmability aspect is becoming a critical element in “Networks for the Future” so operators can adjust bandwidth in the network in real-time to optimize capacity for customer demand.

Vodafone New Zealand announced the world’s first live deployment of a 400G per wavelength optical system in Sept 2017, which was used to carry core IP traffic between its Auckland data centers, to meet the “meteoric rise” of online video streaming, gaming and cloud computing. With WaveLogic Ai, Vodafone New Zealand was able to double the capacity of its existing network, to better prepare for new emerging high bandwidth applications such as 4K video, HD audio, and virtual reality.

As another example, Unitymedia recently announced it is upgrading its network with flexible grid capabilities and WaveLogic Ai, to continue to achieve full throughput of applications and a high quality of experience for customers. With this upgrade, Unitymedia can deliver up to four times the bandwidth within the same infrastructure and site environment while reducing the cost per bit, and benefit from reduced footprint, power consumption and cooling requirements.

The research and education community is also in need of 400Gb/s speed and capacity gains. These organisations rely on “Elephant Flows” (i.e. an extremely large and continuous flow of data) to enable revolutionary scientific projects, such as genome editing, or the analysis of huge amounts of data from, say, the Large Hadron Collider. The United Kingdom’s Jisc, which operates the busiest National Research and Education Network in Europe by volume of data, has already taken the step to upgrade its Janet Network to 400G with Ciena in support of its vision for the UK to be at the forefront of scientific research.

A popular application for the new technology are submarine networks, due to the importance of maximizing spectral efficiency, or maximizing data traffic carried across deployed cables. With WaveLogic Ai, operators can achieve unprecedented capacity over their cables, such as unregenerated 200Gb/s capacity across >10,000km distances, a key reason Angola Cables selected WaveLogic Ai for the MONET subsea open cable system.

The new 400G era is not just on the horizon, it’s here and driven by the rapid pace of innovation required to succeed in the current on-demand environment. As we speak it is making its way across global infrastructures bringing new levels of scale to more efficiently address bandwidth-intensive and ever-changing traffic requirements. I for one am excited to be along for the ride to see how society will leverage these new capabilities and what break-throughs will be next. 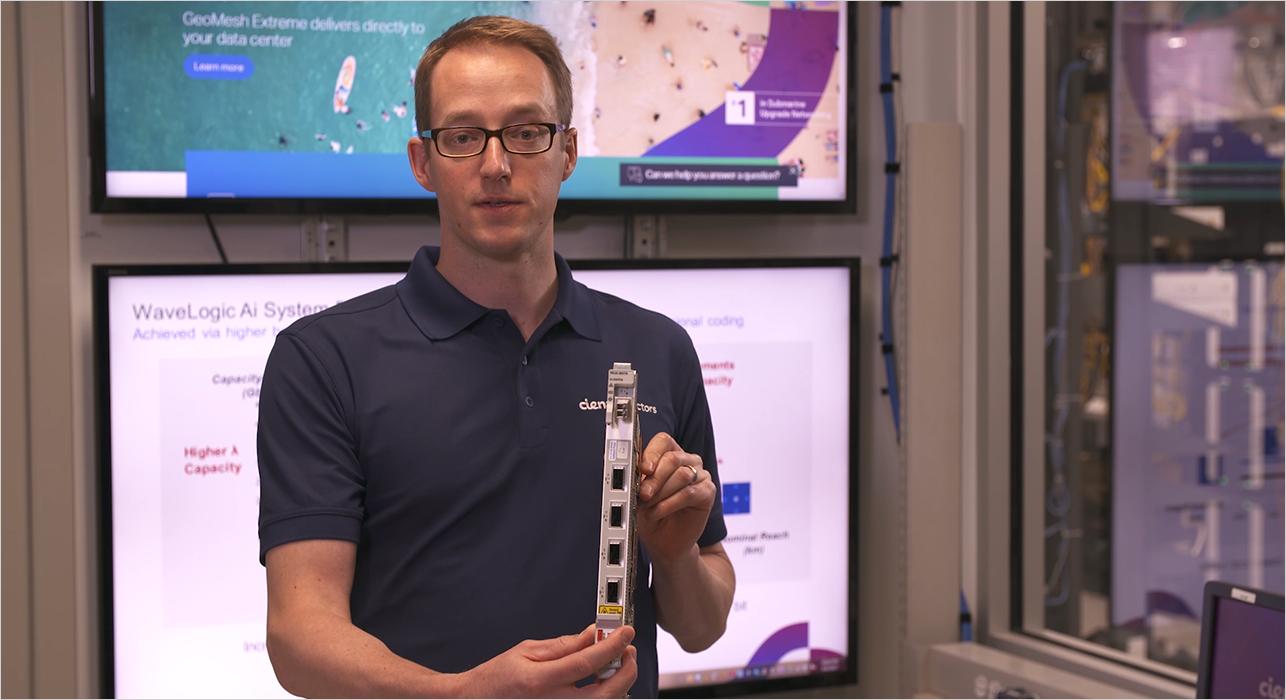