Why broadband is the new electricity for rural communities

Mitch Simcoe
Director of Global Consulting at Ciena
Subscribe Subscribe to Ciena's communications
How is the need for broadband just like electricity was 90 years ago? Mitch Simcoe explains how new government programs are helping to bring this critical service to more areas.

RDOF, BEAD, ARPA, and MMG. These aren’t just the latest acronyms dreamed up by the federal government but rather recent US government stimulus programs for expanding broadband services into rural areas of America. These represent over $100B of funding over the next five years in the US alone. Other countries are also pursuing this initiative as well with Canada allocating $2.5B, Germany $12.5B, UK $5B, and Spain $4B. India has also announced a $100B program for fixed wireless broadband services.

But, we’ve been here before…

Governments stepping in to address gaps in telecom infrastructure in rural communities not directly funded by private industry has been seen before.

To provide an example, let’s go back almost a century ago to the 1930s.

At that time, electricity was widely deployed in the big cities, but rural areas still lacked what is considered a basic utility today. 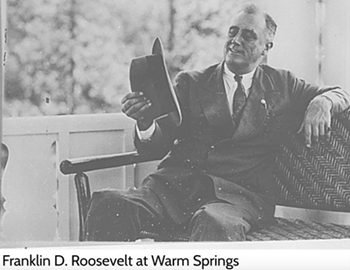 The President at the time, Frank Delano Roosevelt (FDR), saw this first-hand. He was afflicted by polio for over 10 years before he became President and cold winter weather only aggravated his symptoms. Once he became President, he traveled south by train in the winters to a town called Warm Springs, Georgia, a rural area, which lacked the electricity of the big cities like Atlanta. It was during these visits that he saw firsthand the poverty that existed in this rural community because of not having a basic utility, such as electricity, which we all take for granted today.

The utilities in the big cities could not justify the cost of extending electricity services to rural communities, as their return on investment for infrastructure was unfavorable.

Does this sound familiar today?

As a result of this infrastructure gap, FDR went on later in the 1930s to use government funding (part of the New Deal) to bridge the investment gap, which enabled electricity to be extended to these rural communities. New organizations, such as the Rural Electrification Association (REA), were established to distribute this funding. Electrical co-operatives (co-ops), which are non-profits and owned by their customers, used this funding to build out electrical infrastructure in rural communities. 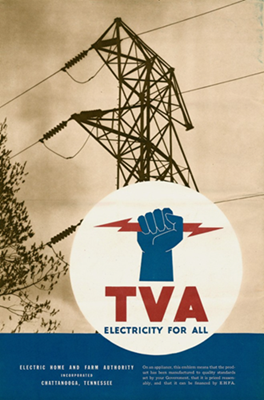 Let’s fast forward to today and see the parallels when it comes to broadband services.

Broadband services, defined as a minimum of 25 Mbps downstream and 3 Mbps upstream and often referred to as 25/3, have been widely deployed in major cities. However, many rural areas have had to live with 3 Mbps downstream services based on legacy and obsolete copper DSL technology. In today’s environment, 25 Mbps is considered baseline broadband service, and a more realistic standard of 100 Mbps down/10 Mbps up (100/10) is considered the new baseline while many ISPs are rolling out gigabit per second broadband services. The FCC defines households that cannot receive a minimum 25/3 service as unserved, and a 100/10 service as underserved. It is estimated that up to 42 million households (or 13% of all US households) do not have access to broadband services.

Thankfully, over $100B in funding has been either awarded or announced over the next five years in the US alone.

Let’s review some of these funding programs:

RDOF (Rural Development Opportunity Fund): This was a reverse auction concluding at the end of 2020 that awarded $9.1B of funding over 10 years to extend broadband services to five million households in rural areas. Here is the allocation of how these funds were awarded across various verticals: 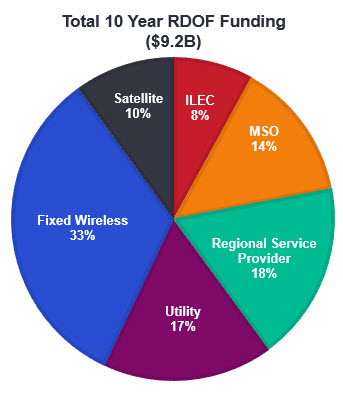 It is interesting to note that the same co-op utilities created 90 years ago to deliver electricity to rural areas are now extending their mandate to deliver broadband service as well.

ARPA (American Rescue Plan) Coronavirus Capital Projects Fund: This is a $10B fund that is part of the overall $350B COVID-19 funding provided to states and municipal governments that can be used by state and local government entities. This program encourages states to prioritize their funding for broadband projects.

BEAD (Broadband, Equity, Access, and Deployment): This is a $42.5B over 5-year program that was part of the $1.2T Infrastructure Bill signed in 2021. It is focused on infrastructure for last-mile access to cover unserved and underserved households. These funds will be allocated to the states by the NTIA (National Telecommunications and Information Administration) which will then have its own Broadband Offices to distribute the funds within their states. This program is dependent on the FCC updating its broadband maps by the end of 2022 to confirm how many unserved and underserved households exist in each state.

MMG (Middle Mile Program): While much of the focus and funding for broadband is on last-mile access, the middle mile (aggregation network) cannot be ignored. Many of the rural areas with unserved households are located many hundreds of miles from the nearest internet point of presence (PoP). The middle mile is defined by the NTIA as any infrastructure that is not connected directly to an end-user. Many rural providers are banding together to create a middle mile network to aggregate all the broadband traffic from various entities to one or more internet PoPs. An example of rural utility co-ops in the state of Arkansas banding together to address the middle mile is the Diamond State Network (DSN).

This program allocates $1B of funding to build out the middle mile and will be managed by the NTIA (not the states) with proposals due by the end of September 2022.

So, rolling up all the available private (estimated at an average of $5B/year) and public funding programs results in a total investment in broadband of $100B over five years.

FDR had the right idea in the 1930s to introduce New Deal government funding to bridge the infrastructure gap to extend electricity to rural areas, such as his Winter White House in Warm Springs, Georgia. After over two years of COVID-19, we have seen that broadband services are no longer a nice to have. They are now an essential service to thrive in this digital age. Thankfully, the government has followed a similar path to 90 years ago with $100B of infrastructure funding to bridge the Digital Divide and enable residents in rural communities to acquire the same benefits that broadband has enabled in the major metro areas of the US.

Futureproof your residential broadband network, without a crystal ball