More than a photon cannon: What iCAIR, UETN and Ciena won at the Data Mover Challenge and what this means for tomorrow’s network 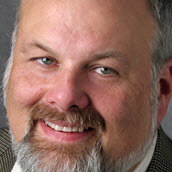 Rod Wilson
Ciena’s Chief Technologist of Research Networks
Subscribe Subscribe to Ciena's communications
iCAIR, UETN and Ciena were recently awarded the Best Long-Distance Performance and Overall Winner of the international Data Mover Challenge (DMC). Ciena’s Rod Wilson explains how the team worked together to achieve this and what it means. 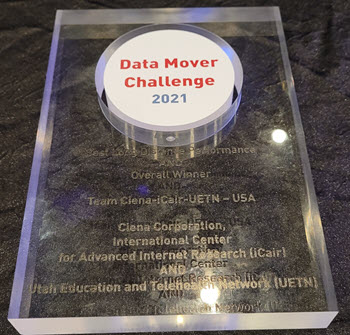 When Singapore’s National SuperComputing Center (NSCC) put out a worldwide challenge to demonstrate the fastest end-to-end data transfer across the world, we in partnership with the International Center for Advanced Internet Research (iCAIR) at Northwestern University and Utah Education and Telehealth Network (UETN), naturally threw our hat into the ring. Taking home not one, but two awards – Best Long Distance Performance  AND Overall Winner – is something we are very proud to be part of considering the level of competition and the incredible task at hand.

In short, there was much, much more to the challenge, dubbed the Data Mover Challenge (DMC), than demonstrating the best “Photon Cannon”. And what we were able to achieve will fast-forward innovation and capability for the networking world.

What we needed to do

If it were just about speed and capacity, the contest would have been much more straightforward than the headline challenge posed by the DMC to “develop and demonstrate fastest end-to-end data transfer across Asia, Australia, North America and Europe on fully operational Research Networks utilizing multiple 100Gpbs links.”

But the devil is in the details, and contestants needed to demonstrate the following capabilities:

If that sounds complex, detailed and arduous to achieve, let alone come out on top of the competition, it’s because it is.

Thankfully, going into the contest, we were a match fit.

Prior to the competition, Ciena’s CTO Group - External Research Team had already been active contributors in developing high-performance computing servers with integrated networking capabilities in partnership with the iCAIR for several years.

Called Data Transfer Nodes (DTNs), the servers attempt to integrate massive storage capacity, optimized computer design and integrated optical networking into a platform system capable of launching large reliable bulk data transfer at maximum speed. Computational intensive science is able to produce mammoth data sets extremely quickly, and DTNs are important to scientists and researchers that need to share this data across the planet in as close to real-time as possible.

For example, the Sloan Digital Sky Survey telescopes capture the night sky, mapping over 200 million objects, every observable night. This data needs to be moved from telescopes to partner researchers anywhere, and quickly.

eBook
Networks for the Future of Higher Education

Many research networks rely on Ciena for ultra-reach and high-capacity infrastructures, including our partners at iCAIR and UETN, as well as many of the participating research networks being used for the challenge. These world-renowned organizations operate networks that serve the needs of universities, educators and researchers conducting data intensive science and rely on Ciena’s solutions to meet their requirements.

Our technical expertise ensured we went into the competition confident -- but the demands set by the Data Mover Challenge were a stretch for every contestant, including us.

None of this was as simple as it may sound, and it pushed us beyond our system capabilities.

Ultimately, the solution prepared by our team was recognized as the overall winners. Further, this design operated in ways that not only ticked all the boxes but provided the fastest transfer speeds against all test requirements.

The awards we received – Best Long Distance Performance, and the award for Overall Winner – are a fantastic validation of the technical expertise and exceptionalism Ciena’s team and our partners iCAIR and Utah Education and Telehealth Network (UETN) were able to demonstrate.

But this competition, for us and our partners, has provided us with more than two awards.

The awards we received – Best Long Distance Performance, and the award for Overall Winner – are a fantastic validation of the technical expertise and exceptionalism Ciena’s team and our partners iCAIR and Utah Education and Telehealth Network (UETN) were able to demonstrate.

Massive data flows generated by advanced computational applications drive technological evolution, and Research and Education Networks are often the first adopters of revolutionary technologies. We’ve seen this countless times through history. The Space Race rocketed NASA’s – and the nation’s – scientific and technological capabilities forward exponentially. Most recently, the technology developed to accelerate particles for the Large Hadron Collider, known for discovering the Higgs Boson, is in turn creating a new generation of compact accelerators with applications ranging from security to cancer treatment.

Only through pushing boundaries can we find what is beyond them, and this competition helped Ciena and its partners develop new capabilities which will prove a boon for the R&E networking world and beyond. These learnings are then shared with our product development teams to start applying them.

Our work on DTNs proved they are now more than simply appliances for data storage and forwarding. They offer a systems approach that blurs the lines where computers interface to networks. We have now reached a point where the network is part of the scientific apparatus, and capabilities developed for the Data Mover Challenge prove the network is the computer and the computer is the network.

The awards are a monumental testament to the innovation required to win. What we do with that innovation from here on out will help to drive networking technologies forward for years to come.

The next generation of HPC networks: how to adapt to keep pace with growing bandwidth demands

White Papers
A Self-Optimizing Fabric for the 5G Era

This paper examines how self-optimizing fabrics forming a nervous system for the world of interconnected smart things could help ...

Articles
The next generation of HPC networks: how to adapt ...

How does the next generation of optical networking technologies allow high-performance computing (HPC) clusters to connect with p ...

The SC17 conference provides a perfect opportunity to experience the intersection of high-performance computing with high-perform ...

Ciena's Vini Santos shares a list of fundamental pillars to consider in R&E network evolution planning. These pillars are importa ...

This paper highlights three unique scenarios that explain how Ciena’s Waveserver platform can be used to alleviate current R&E ne ...