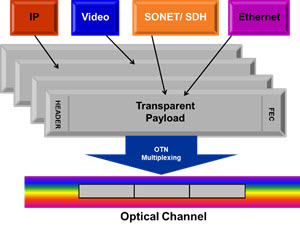 OTN is commonly called a ‘digital wrapper’ as it wraps each client/service transparently into a container for transport across optical networks, preserving the client’s native structure, timing information, and management information. The enhanced multiplexing capability of OTN allows different traffic types, including IP, Ethernet, storage, digital video, and  SONET/SDH, to be carried over an OTN framing structure—a key reason for the adoption of OTN.

Since its inception in 2001, OTN has continued to evolve beyond a simple SONET/SDH wrapper. In fact, OTN has been optimized to support  Ethernet—today’s most popular client service—from 1GE to 400GE. OTN-enabled technology often underpins next-generation optical networks with its ability to support flexible packet technologies that include new Ethernet interfaces, Multi-Protocol  Label Switching (MPLS), Segment Routing, and Time Sensitive Networking (TSN) to name a few. To date, OTN technology has been extensively deployed in networks across the globe, with increasing scope across a wide spectrum of applications.  Hundreds of thousands of OTN ports have been deployed and are carrying mission-critical traffic from the edge into the metro and core of the network,  as well as in submarine applications.

OTN information structure
The OTN wrapper is made up of several components in a hierarchy as depicted in  Figure 1.

The Optical Transport Module (OTM) is the information  structure transported across the optical interface. It has two parts: a digital  structure and an optical structure. The Optical Channel Payload Unit (OPU)  contains the payload frames. The payload area of the OPU structure is comprised  of end-user services such as IP, Ethernet, or any other protocol. The OPU  overhead is associated with the mapping of client data into the payload area. The  Optical Channel Data Unit (ODU) contains the OPU overhead and payload area,  plus additional overhead such as BIP8, GCC1/2, Tandem Connection Monitoring (TCM),  and so on. The ODU represents the OTN path service within an OTN network. 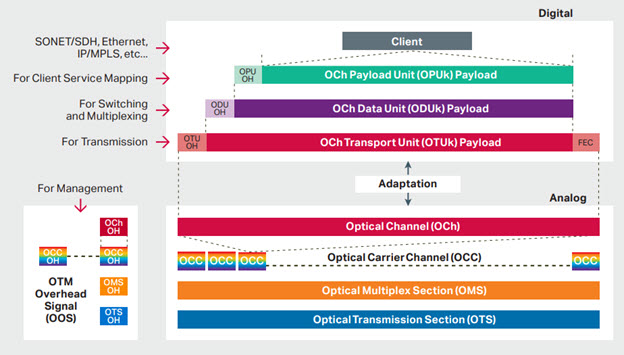 Figure 2: The Optical  Transport Module (OTM) is the information structure

OTN technology in optical networking
As shown in Figure 3, OTN  technology is used in various ways within an optical network. OTN mapping or encapsulation is used to provide high-bandwidth agile photonic connections. For example, today’s coherent modems leverage OTN mapping to transport client service(s) over a high-capacity coherent wave. Transponders that are widely deployed today use OTN to map a client to a Dense Wavelength Division Multiplexing  (DWDM) channel.

OTN is also widely deployed among networks leveraging module-based or central fabric-based  OTN hardware. An OTN muxponder multiplexes lower speed clients onto a DWDM  channel within a hardware module or compact platform, enabling cost-effective point-to-point connectivity. Muxponders aggregate and groom lower rate services and are used in compact DCI platforms today to transport multiple 100GE/400GE  services. It is important to note that even packet optimized technologies like 400ZR and  OpenZR+ are based on OTN structures that are optimized for Ethernet only clients.

Larger networks in the metro and core consisting of many nodes that are interconnected together can use an OTN centralized fabric, which again multiplexes (or grooms) lower speed clients onto a DWDM channel. However,  it is by way of a back-plane cross connect or fabric.

This enables highly flexible, scalable and on-demand any-to-any connectivity over the network. The result is the ability to maximize fiber capacity with efficient utilization of high-capacity next-generation coherent wavelengths. This solution can also be coupled with an OTN control plane to deliver increased reliability for enhanced SLA leveraging flexible protection/restoration options. It is important to note that some providers are deploying hybrid packet and OTN switching, enabling flexible deployments with any degree of packet and/or OTN switching.

Improved performance with FEC. A  key advantage of OTN is that it defines an out-of-band FEC scheme applied to  the signal before transmission. FEC dramatically improves tolerance to network impairments  present in high-capacity transmissions, correcting and detecting errors in the  optical link. FEC is used to significantly increase system margin for a given  Bit Error Rate (BER) and signal power, which allows longer spans in the  network. This enables providers to extend the distance between optical  repeaters, which helps reduce both capital and operational expenses while  simplifying the network topography with the ability to skip amplifier sites.

Built-in real-time latency  measurement. Complying with maximum latency SLAs is an important  requirement in many applications. Latency measurements are native to OTN and  can be used to ensure SLA compliance. 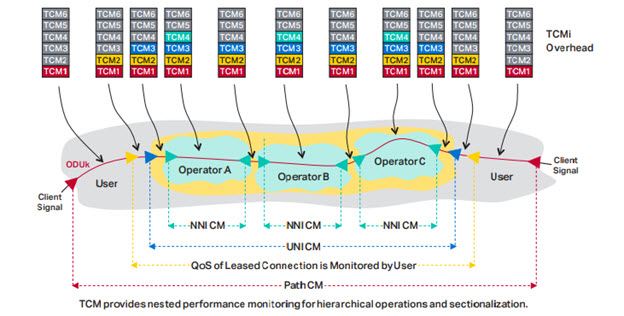 TCM offers enhanced sub-network operations that define up to  six levels of performance monitoring, enabling improved operations and the  ability to efficiently deliver differentiated SLAs across the sub-network  segments.

Faster service turn-up. The  decoupling of the client from the DWDM line allows separation of service  turn-up from that of adding capacity to the DWDM network. This means that new  services can be added quickly, simply by selecting available line capacity  between the start and end nodes (A and Z) within the meshed network. This  differs significantly from using a more traditional transponder-based  architecture approach that requires dedicating a new wavelength between two  points that need bandwidth. When the fill levels reach planning thresholds,  additional line capacity can be added as needed. Fast service turn-up is an  important competitive differentiator and is a key building block for enabling a  more dynamic, on-demand network that enables operators to rapidly respond to  service requests to meet changing customer expectations and unpredictable  traffic requirements.

Maximize network efficiency. OTN  offers the ability to map a flexible range of clients onto a DWDM wavelength  and allows multiple clients to share the same optical network. This capability  allows network providers to run their DWDM links as efficiently as possible  with no stranded bandwidth, thereby maximizing network efficiencies. The  emergence of ODUflex traffic containers enables the highest degree of network  bandwidth optimization, particularly when transporting sub-rated  Ethernet/packet services. With a packet/OTN centralized fabric that supports  ODUflex containers, providers can precisely adjust the size of the OTN container  in 1.25G increments to more efficiently match the service that is being  transported.

Differentiated service offerings. By combining OTN switching and the L1 (OTN) control plane, operators can  benefit from enhanced programmability, whereby services can be established,  protected, and restored according to specific SLAs and policies. Having a  packet/OTN mesh-based network with ubiquitous OTN switching in conjunction with  a control plane allows for fast restoration of services, as OTN switches can be  rapidly reconfigured—faster than ROADMs.

Ciena’s 6500 Family of Packet-Optical  Platforms leverage the latest technology innovation across L0 to L3 to enable a  programmable infrastructure that can scale and respond on demand to changing  customer requirements. With the 6500 Family, operators can deploy OTN blade-based  transponders and muxponders as well as agnostic packet/OTN fabric-based hardware, scaling to 24Tb/s per shelf. Combined with intelligent OTN  control plane capabilities, the 6500 Family efficiently supports applications  from the edge to the core and across the ocean.