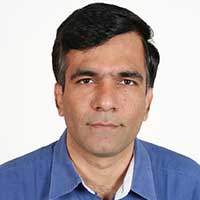 Vikas has approximately 22 years of experience in Telecom, Networking and Data Analytics industry. Vikas holds a Master in Software from BITS (Pilani) as well as Masters in Computer Applications (MCA) from University of Indore. Vikas joined Ciena India in July 2006, when Ciena India development center was being setup. He started his career in Ciena with the development of Ciena Network Designer (CND), a planning tool for Ciena platforms. After that, he was responsible for transitioning of CDD (Core-Director Designer) to Ciena India. Since 2010 Vikas has been instrumental in driving development for Ciena’s flagship tool – OnePlanner.

He took the leadership of the Network Planning team in Feb’18. In May’18, responsible for strategy and evolution of Planning tools. As part of this journey, grew Network Planning team from less than 10 to 90+. Before Joining Ciena in 2006, Vikas held lead designer positions at mature as well as start-up’s companies, got experience in Networking (POP3, SMTP, DNS and MIME) protocols and Data analytics as part of it.