Open Submarine Cable management and what you need to know

Brian Lavallée
Senior Director, Solutions Marketing
Subscribe Subscribe to Ciena's communications
The adoption of the Open Submarine Cable business model is well underway. What does that mean for how to manage them and what a submarine cable operator needs to know? Ciena’s Brian Lavallee explains.
eBook
Open Submarine Cable Management Handbook
The benefits of open submarine cables are real and tangible, as evidenced by its rapid industry adoption in relatively short period of time. What are Open Submarine Cables and why are they important? In the past, I blogged about the Open Submarine Cable Handbook, which covered a relatively new business model whereby the Submarine Line Terminal Equipment (SLTE) is separated (disaggregated) from the wet plant. This allows submarine cable operators to purchase the best SLTE in the market, when they need it, for a best-in-breed submarine network design. Being able to pick-and-choose from a wider range of SLTE vendors also provides a broader, more secure supply chain and generated increased competition.

It’s precisely due to these real and tangible benefits that the industry moved towards standardizing Open Submarine Cables with the introduction of the ITU-T G.977.1 standard. You can learn more about this critical new industry standard and its importance in the “Understanding the New Standardized Recommendations on Open Submarine Cable Acceptance” webinar given by my esteemed colleague, Priyanth Mehta.

We’ve actually been operating in a quasi-open cable market since the introduction of coherent networking over a decade ago, which was invented by Ciena and originally targeted at long-haul terrestrial use. It was soon tested over 3rd party submarine cables originally designed for On-Off Keying (OOK) using Intensity-Modulated (IM) transponders and worked extremely well.

Coherent technology allowed submarine cable operators to breathe new life into the existing wet plants with massive increases in information-carrying capacity that went well beyond original OOK-based designs. The telecom industry never looked back, and coherent optical technology rapidly became the de facto choice for long-haul submarine (and terrestrial) optical network transmission. To go from a de facto standard to a formal industry standard, the ITU has created the G.977.1 standard to simplify the acceptance of a vendor’s SLTE over 3rd party wet plants.

How do I manage open submarine cable designs? 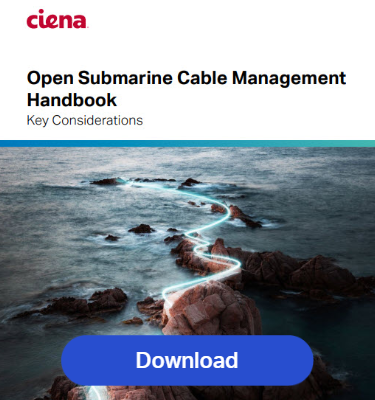 The benefits of open submarine cables are real and tangible, but how do we manage these types of disaggregated submarine network designs? What should a submarine cable operator need to know? What is an Application Programming Interface (API) and how is it used? What are data models and why should I care?

To help with these topics, and much more, we published a new and freely downloadable Open Submarine Cable Management Handbook that explains what you need to know about managing open submarine cables. Download it today.