When the industry talks about 5G, there is a level of excitement and optimism about what it will enable. With this hype, however, comes confusion around what is reality, and what is quite frankly a myth. Ciena’s Brian Lavallée looks at five of the more popular myths, debunks them, and talks about what we’re likely to see in the marketplace.

This article was first published in RCR Wireless.

1. With 5G on the horizon, 4G is dead
The often-heard demise of 4G is not real, and in fact, we have several more years of 4G continuing to grow — with many millions of new connections still to be added to the network.

When 5G begins to roll out, it will likely start in a select group of countries like the United States, South Korea, China, Japan, and India. However, we won’t be saying goodbye to 4G anytime soon. The truth is, 5G was never intended to replace 4G, unlike 4G that was expected to replace 3G (but never really did). When 5G rolls out, 4G and its multiple variants will still play a key role in the network — particularly for less bandwidth-heavy applications and use cases. This means operators need to plan for both 4G today and 5G tomorrow, as both will coexist and share same network resources for the foreseeable future. 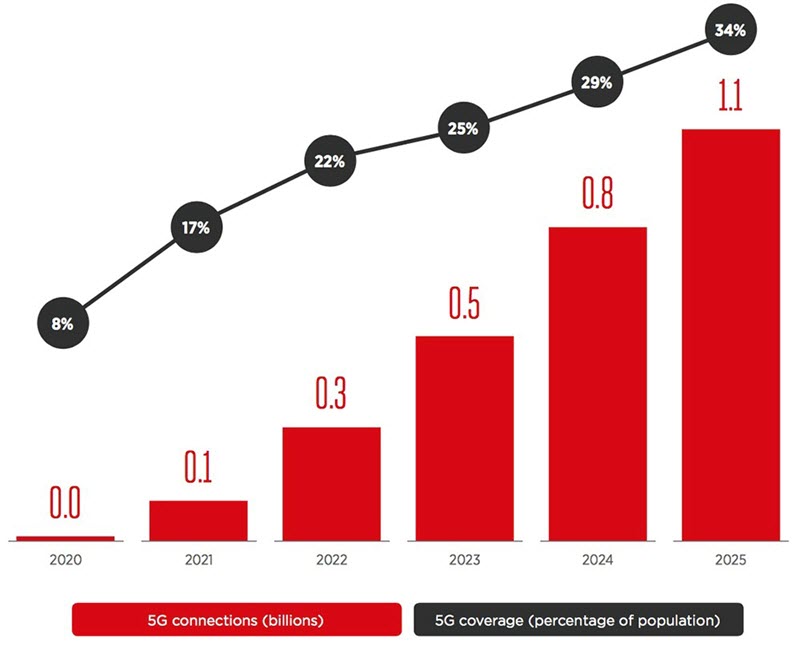 Think of when you called another country over the satellite network — everyone talked over one another because of annoying delays. Soon, the latency (or lack thereof) that you will get with 5G will make it possible to communicate in near real-time, making many new applications and use cases a reality. A few examples include autonomous self-driving cars, extreme real-time communications, as well as ultra-reliable communications such as remote eHealth monitoring.

In addition to reduced latency, there is a benefit of greater network availability, as well as guaranteed end-to-end network performance. This is possible through a concept called Network Slicing, which allows for a single physical network to be sliced up so that different groups of customers receive different levels of guaranteed performance. For example, police officers, firefighters, and other first responders are a great example to illustrate the benefits of Network Slicing. Today, first responders have their custom, proprietary closed voice communications networks. They do not use the cell network because after a disaster occurs everyone starts sending videos, tweets, and calling loved ones, which considerably slows down the network, or even collapsing the network altogether such that no calls go through – not what emergency responders need! With Network Slicing, first responders would get top priority on a network with the highest level of availability meaning no matter how many people are simultaneously on a network, calls from first responders will always get through.

3. 5G standards are complete and finalized
There is a lot of talk about 5G standards, trials, and deployments, but in reality, the standards are still incomplete. The first standards focus on the 5G New Radios (NR) – the part that mobile devices communicate with. With the first 5G NR specs recently approved by the 3GPP, commercial offerings are expected to follow soon. The whole backend, which helps to guarantee end-to-end network performance won’t be ready for quite some time.

Even once all the standards are finalized, mobile network operators will likely take their time in commercializing the technology, as they will want to perform many test and trials to minimize risk before massive wide-scale deployments occur, and this makes perfect sense. This means broadly available standards-based end-to-end 5G network services are still a year or more away.

4. 5G products (or devices) are available today
Since the 5G standards are not complete, there is no such thing as a “5G product” today. To get around this, some talk about having 4.5G (better than 4G, but not quite 5G) products that meet the current draft standards being proposed today. However, it is important to note; you can’t credibly make this claim because if you build something based on where the standards are now, there is still a chance the product won’t be able to adapt, such as via software upgrades, when standards are approved later. That said, as we get closer to the 5G standards being finalized, the risk of not being able to upgrade is reduced.

5. Wireline (fixed) networks have nothing to do with 5G
When people think of wireless networks, they automatically think of their smartphone. The problem? That is only a part of the equation. Smartphones talk over airwaves, but once it hits the cell tower, it is primarily all fiber for the rest of the journey. For example, if you are streaming a Netflix video from a phone, the only wireless portion is from you to the cell tower. From there, all the way back to the data center, the wireline network is primarily packet-optical. This means you can have the best wireless performance in world, but if your wirline network that connects you to your data center is not high-performance, then end-to-end performance suffers. As a result, wireline networks have just as much to do with 5G as wireless and ultimately will dictate the end-to-end network performance that end-users will experience.

Where do we go from here?
Building an infrastructure to support 5G is a massive undertaking. It is expected to be a journey that is going to take many years before operators will have the bulk of their network transitioned to 5G.

However, this doesn’t mean operators should wait to start planning for 5G. As mobile network operators continue to scale their networks for ongoing 4G adoption, which will fund future 5G deployments, it is critical to take expected 5G performance requirements into account to avoid costly, risky, and time-consuming rip-and-replace scenarios. For the foreseeable future, 4G and 5G will coexist and share much of the wireline network from the cell sites to the data center where access content is hosted, and everything in between. This means to start preparing for the future of 5G, network operators must separate fact from fiction today.