My teammate John Hawkins recently answered the question of Why are TDM services still around where he defined what TDM is and its various challenges. This blog will tunnel down into the Wireless mobile world, specifically why TDM mobile backhaul should migrate to packet mobile.

Mobile data traffic has been growing at an alarming rate with no end in sight. In order to meet this demand some Mobile Network Operators (MNOs) have modernized their Radio Access Network (RAN), including their mobile backhaul networks.

Mobile backhaul refers to the network between mobile base station sites and the mobile network controller. ‘Backhaul’ is also sometimes referred to as the first mile or last mile.

The Evolution of Mobile Backhaul 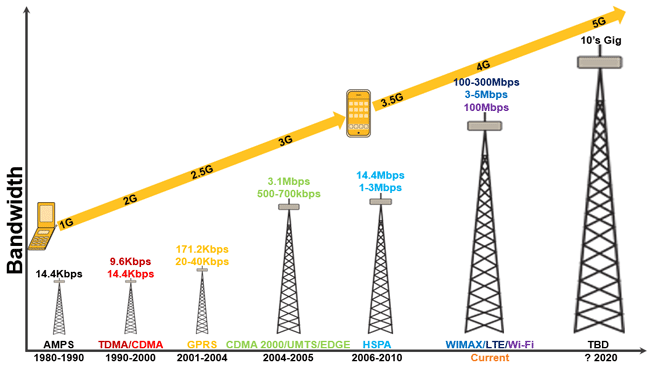 The evolution of mobile technology has been heavily influenced by the need for ever greater data usage and bandwidth. From its analog beginnings in the 1980s, wireless has evolved through several generations of technology that delivered kilobits, then megabits, to today’s hundreds of Mbps of bandwidth with 4G. While in the not too distant future 5th generation (5G) mobile technology will enable 10’s of Gbps packet services.

Ethernet and the Smartphone Era

Mobile backhaul services represent a huge opportunity for MNOs. However, MNOs also have to deal with multiple generations of mobile technology in their network that require support, as well as a general adverseness to using mobile packet networks to support voice services.

In the past, connection oriented technologies like TDM and ATM were effectively deployed for all mobile backhaul networks. At that time, connection oriented technology was preferred and very complementary to meet the tremendous demand of basic mobile handsets with services like voice, text, and limited data. MNOs simply planned their TDM services accordingly, and increased the number of lines as needed. But customer demand for data services grew and two game changers surfaced, 3G and smartphones.

With the advent of smartphones data traffic rates grew, but user experience suffered as mobile wireless networks evolved to the 3rd generation (3G) with native Ethernet interfaces. With 3G interfaces being native Ethernet, MNOs realized simply increasing the number of TDM lines in the backhaul was operationally expensive, inflexible, and wouldn’t scale. Even of more concern was how fast 4G was coming (now here) and 5G not very far away, which will bring a tsunami of data with new revenue opportunities.

TDM scalability can be an issue. While purchasing or adding lines can temporarily solve capacity problems, it doesn’t solve the data services challenge. Additionally, TDM circuits have large steps from T1/E1 to DS3 to STM-1/OC3 and higher. TDM equipment and circuit costs are much higher than packet, and lowering TDM Monthly Recurring Charges (MRC) paid to backhaul transport providers for wireline backhaul means dramatic savings.

Since LTE itself is packet based, it makes sense to use packet-based backhaul instead of “mapping” the LTE services over TDM timeslots. With continued growth, TDM networks can become a bottle neck -- exhausting operations, creating delays and limiting revenue opportunities not to mention the operational costs.

Wireless growth and new revenue services are based on data and not voice. In order to meet the needs of constant technological changes and bandwidth hungry users, mobile backhaul infrastructure must be flexible to support legacy and packet services, scalable for emerging future technologies, and cost-effective to compensate rising levels of mobile data traffic.

Daunting as it may seem, there is a light at the end of the tunnel. Mobile Packet backhaul networks can migrate from TDM to Packet, by supporting their TDM services while gracefully migrating to packet when they need.  Ciena’s Packet Networking portfolio can provide both TDM and Ethernet while simplifying the operational process, improving and helping mobile backhaul network evolution today.

Primer: What is mobile fronthaul?

Webinars
The edge: from hype to promise

Join this webinar as we explore the benefits of edge cloud for operators, which edge applications are expected to drive revenues

Webinars
The edge: from hype to promise 2

Join this webinar as we explore the benefits of edge cloud for operators, which edge applications are expected to drive revenues

Articles
Primer: What is mobile fronthaul?

Our expert Brian Lavallée explains both mobile backhaul and fronthaul and how they address the growing challenge of helping trans ...

Ciena’s Brian Lavallée, talks 5G rollouts and how ultimate success will depend MNOs making sure that they have fiber in place for ...

This paper defines five key wireline network improvements that are needed for a service provider to be ready to deploy 5G service ...

White Papers
Impact of 5G on Wireline Networks in Asia-Pacific

Understand why MNOs in the Asia-Pacific region need to take action now on an integrated wireless/wireline planning approach to so ...

Our Ciena team spent the week talking to customers, speaking at sessions, and on the exhibit floor showing off our latest tech to ...