Why 5G Will Change Everything About The Network

Brian Lavallée
Senior Director, Solutions Marketing
Subscribe Subscribe to Ciena's communications
Ciena’s Brian Lavallée takes a deep dive into the coming world of 5G and shows why the exact details of what a 5G network will look like is still up for debate.

There’s a lot of discussion, dare I say hype, in the market today related to the impending move towards 5G mobile networks. How is this going to work? Where do we set our expectations? Where are we going with 5G? In today’s post let’s take a deep dive into the coming world of 5G and separate fact from fiction.

Well, besides being the next generation of mobile networks that come after 4G, no one really knows. That’s because 5G has yet to be standardized, and it likely won’t be for some time. But we’re a highly optimistic bunch, so it hasn’t stopped our industry from predicting—or dreaming about—the performance improvements in this next generation of mobile network infrastructure.

There are two ways to view 5G: as a services-led view or as a network-led view. For the purposes of this post, let’s focus on the latter.

Different stakeholders operating in the wireless networking industry—from equipment vendors to Mobile Network Operators (MNOs) to analysts—have widely varying visions of 5G mobile networks. The following are just a few of the expected performance gains on the mobile horizon:

So you see, 5G is far more than just increased bandwidth; although, that’s what most mobile subscribers crave given our ongoing affinity for mobile video. Some of these lofty expectations may ultimately be softened, as we strive to maintain the essential performance vs. cost balance, but others are more aggressive. However, we have to shoot high for this next generation of critical network infrastructure, right? We’ve got to dare to dream big if we’re hoping to achieve big things.

“Big” is a highly subjective term, though…isn’t it?

So how do you build a 5G capable network?

How do we obtain aggressive performance gains in speed, latency, and coverage? By architecting a heterogeneous network (or HetNet, as it’s commonly called) comprised of different cell types, including WiFi cells, small cells, and venerable macro cells. It’s the intelligent utilization of these cell types, whenever and wherever they make technical and economical sense, which will result in a highly flexible 5G mobile network architecture optimized for significant, overall performance gains.

The evolution towards 5G networks will affect the entire end-to-end network infrastructure, from virtualizing the Radio Access Network (RAN) and Evolved Packet Core (EPC), to upgrading the radio and air interfaces, to segments interconnecting air-based to land-based networks—the Mobile Backhaul Network (MBH). The significant capacity, availability, and latency performance gains expected from 5G will ultimately be imposed upon MBH networks to varying degrees. 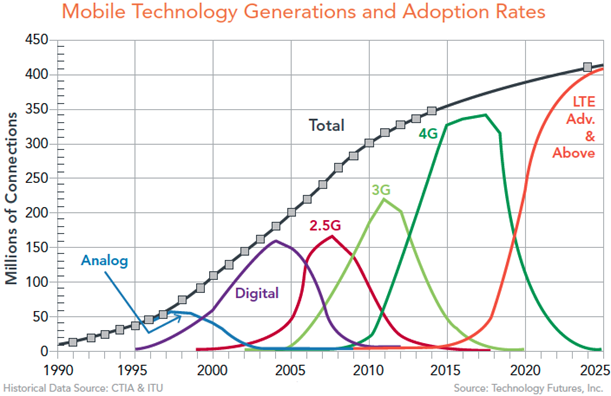 How will these capacity demands be addressed?

Growth in capacity demands will be addressed by leveraging Ethernet rates from 1GbE to 100GbE (and 400GbE within a few years), where the chosen rate will depend upon projected traffic demands of each WiFi, small, or macro cell or the core node that aggregates traffic from a bunch of different cell sites. The latter will drive significantly more traffic into the core network all the way into mammoth data centers hosting accessed content.

Core network bandwidth growth will be addressed by leveraging coherent DWDM rates of 100G, 200G, and beyond, which is already the case today with increased 4G adoption. In short, increases in access speeds drives throughout the global network.

Equipment and power redundancies, such as dual power supplies and battery/generator backups, ensure network nodes themselves are highly available. Network intelligence will route or switch around faults and/or congested nodes, such that mobile users—man or machine—perceive constant network availability, even when inevitable faults have occurred. Software methods, such as micro-services, will also enable more reliable and scalable 5G mobile networks.

Can we get to 1ms latency with 5G?

Latency of 5G networks is expected to be up to five times lower than 4G networks, with a daunting maximum target of 1ms under discussion. Based on what we know today, there are fundamental laws of physics that cannot be broken, such as the speed of light. Due to the intrinsic properties of the optical fiber core, light propagates within an optical fiber about one-third slower than in a vacuum.

Wireless MBH is faster, as it’s an air-based communications medium, but it’s far more limited in terms of capacity, reach, and availability. Regardless, wireless backhaul absolutely has and will continue to have its place in most MNO networks. It’s not a question of optical-based MBH or wireless-based MBH, as both will be required going forward.

To put things into perspective, for a mobile service requiring 1ms delay, the interconnectivity must occur within 1km of the mobile user; to achieve this latency, other non-network techniques must also be used. Mobile Edge Computing promotes situating IT and associated cloud computing capabilities directly within the RAN itself. By locating the content, services, applications, and functions as close as possible to mobile users, significant latency improvements are achieved.

However, given the enormous investments required to re-architect existing mobile networks, some are starting to wonder if the 1ms latency target will actually become a part of the 5G standard, be relaxed somewhat, or even be omitted entirely. Only time will tell; though a lower latency target than 4G will likely still remain, standardized or not, because lower latency enables new services and associated revenue streams, along with coveted MNO differentiation.

What does it all mean?

The future of 5G will change everything in terms of network performance and enabling an incredible amount of new services, although exactly what the new 5G network will actually look like is still up for debate. Most of the innovative new services being promised have not even been dreamed up yet!

Will critical MBH networks be able to cope with the expected performance targets, whatever they may be? I think so, as I firmly believe that the best way to achieve a seemingly impossible goal is to tell the R&D community they cannot achieve it, then stand back and let human nature take over.

Who would have thought a few decades ago that the complete knowledge of mankind would be readily available in the palm of your hand? In this new age, we no longer go to the library anymore; the library comes to us. 5G will, not surprisingly, change everything, and while how exactly the network will look is a mystery, it’s no mystery that today’s engineers will rise to the challenge to make 5G a reality.

Why “network slicing” is the key to 5G network adoption