What is Gridless Networking?

As the industry continues to push the boundaries of optical transmission speeds, the concept of “Gridless Networking” has emerged as a key requirement for tomorrow’s flexible and dynamic transport networks.  What is gridless networking?  Brian Lavallée, who heads up submarine networks industry marketing for Ciena, provides some insight.

Current optical transmission systems rely on fixed grid filtering to carve the available bandwidth into a number of channels that can be used to carry traffic. The filtering can be achieved using passive filters, active configurable MUX/DeMUX elements (e.g. Wavelength Selective Switch) or a combination of passive and configurable elements. The traditional terrestrial grid spacing is typically on the ITU 50GHz or 100GHz grids. A tighter grid spacing of 25GHz or 33GHz is also used today, such as submarine application systems.

The goal is simple, squeeze as much information as possible into the available light spectrum on the fiber to improve the “spectral efficiency” of the optical network and achieve economies of scale.  Figure 1 illustrates the difference between a fixed grid spectrum and a gridless spectrum, where the latter squeezes the channels as close together as possible for maximum spectral efficiency.

Why do we want maximum spectral efficiency in the first place? To leverage a single line system and lower overall network costs. 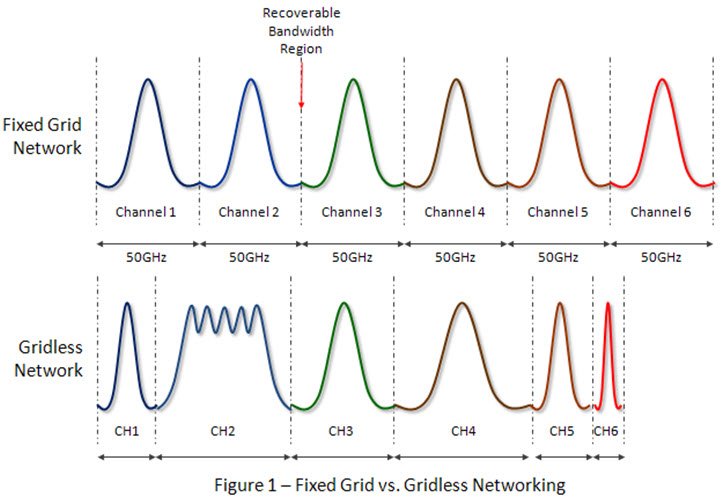 The future of optical networks

As optical transmission technologies evolve, the bandwidth required for each optical channel, and the optimal spacing between them, will also evolve.  This is because some optical transmission technologies may require more or less channel space, or spectrum, than others. For instance, a 1Tb/s (1 Terabit) super channel will likely require more optical bandwidth than a 10Gb/s channel as they co-propagate down the optical line system. Today’s common use of fixed channel filter sizes can also lead to non-optimal channel spacing, resulting in potential “wasted” bandwidth and a lower resultant spectral efficiency.  As a result, the use of a gridless network will not only enable newer and higher bandwidth channels, but will allow more efficient spacing of today’s existing channels such as 10G.

The WSS (Wavelength Selective Switch) can be used as the active MUX/DeMUX to enable remote control and automation of wavelength routing within a fiber plant. The WSS is a fixed grid product on either a 50GHz or 100GHz grid. To enable gridless transmission while still retaining remote network control and automation, a new type of active MUX/DeMUX is required and is referred to as an FSS (Flexible Spectrum Switch), which allows for variable channel spacing and the elimination of wasted bandwidth. In other words, various optical channel speeds can coexist, utilizing maximum spectral efficiency, on the same optical fiber network. This will achieve economies of scale and lower the overall network cost.  The deployment of the FSS works best in combination with the application of coherent detection, effectively reproducing the electrical baseband filtering centered exactly on the optical carrier.

The use of gridless technology results in the ability to provide flexible DWDM filtering for advanced modulation formats, such coherent detection. By being able to handle various bandwidth sizes per channel, this opens up the optical network for advances in modulation formats, as the network is no longer constrained by traditional fixed optical line filtering. The evolution of the transmission systems from today’s fixed grid structure to tomorrow’s gridless configuration allows the optical system to use channel bandwidth and pre-FEC error rates to dynamically select the best channel spacing while simultaneously eliminating potentially wasted bandwidth for optimized spectral efficiency.

The end result is a truly dynamic and intelligent optical transport infrastructure that can adapt to new optical technologies and bandwidth demands while ensuring the most efficient use of fiber spectrum as possible.