March 12, 2019
Molly Winans
Subscribe Subscribe to Ciena's communications
On March 12, 1989, Tim Berners-Lee submitted a proposal that suggested information stored on separate computers could be shared across multiple computers. 30 years later, that idea has evolved, and the World Wide Web is used by more than 3 billion people across the planet. Ciena experts reflect on this milestone and the impact of the world wide web.
Article
Coherent optical turns 10: Here’s how it was made
‘Vague but exciting’. Typically this phrase would be used to describe a child’s first book report or your neighbor’s garage band debut, but certainly not the global juggernaut that is the World Wide Web (WWW). Vague but exciting is the exact phrase that Tim Berners-Lee’s boss, Mike Sendall, wrote on his proposal for an information management system that ultimately became the World Wide Web.

While the WWW was not readily available to everyone, its inception on March 12, 1989 serves as the tipping point for something that is anything but vague. Initially, it was intended for Tim’s colleagues to share information for different projects but evolved into something much larger – the web that the entire world uses to read the news, grocery shop and stay connected with friends and family.

I asked a few of our experts to reflect on what it means to them, what passion it brings to their job, and how it has changed the world.

“It’s been three decades since Tim Berners-Lee created the World Wide Web and kick-started the transition of the Internet from an academically oriented e-mail and file transfer mechanism to it becoming the information superhighway of our digital age. The rapid adoption of the Web and the ease-of-use that it brought to virtually everyone for creating, consuming, and sharing content has spawned myriad new business models and brought information to our fingertips, all while revolutionizing everything that it has touched.

We now have more than half of the world’s population on-net and you’d be hard pressed to find a technology that has changed society so rapidly. Today, it’s hard to imagine a world before 2-hour delivery or the ability to click a few buttons and connect with family half-way around the world. Even for those who remember a time before the internet, it feels like a lifetime ago! 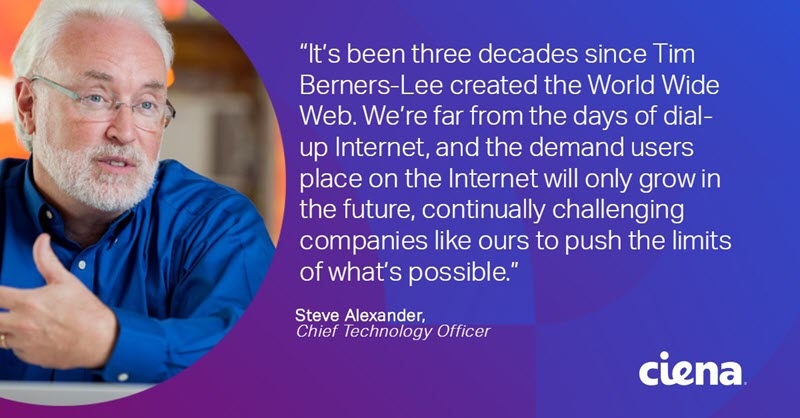 The global adoption of Tim’s revolutionary World Wide Web technology also laid down a challenge to the infrastructure providers to keep up with unprecedented scale and demand. It is through innovations like Ciena’s WaveLogic coherent optical technology, and our use of Software Intelligence and Automation that we meet these challenges. We’re far from the days of dial-up Internet, and the demand users place on the Internet will only grow in the future, continually challenging companies like ours to push the limits of what’s possible.”

Article
Ciena unveils WaveLogic 5: 800G and so much more 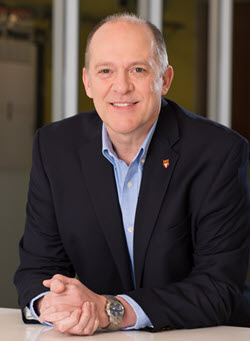 “The World Wide Web has touched so many aspects of our lives that it is difficult to pick any one thing to talk about. I do think that, in general, a sign of successful innovation is to feel that you have never been without it… and to ask yourself, “how could I ever get through the day without it?”. We can’t live without it, we can’t play without it and we can no longer do business without it. We have also reached a point where we almost forget it is there – it has become second nature, like muscle memory.

I think, from a Ciena perspective, we are in that place. We have quietly powered the internet’s arteries since the mid-90s as it has evolved and scaled through multiple generations of capacity demand. Very few people fully understand how it works or what it takes to continually grow the underlying internet infrastructure, but everyone certainly cares that it works at all times.  This is one of the reasons that I get up every day and come to work at Ciena - what we do fundamentally impacts how the internet operates, even if the majority of the world doesn’t know who we are.”

“Submarine cables carry over 99 percent of all intercontinental communications and, together, are the unheralded backbone deployed in the harshest environment on earth – the bottom of the world’s oceans. No other communications network, satellites included, can reliably and cost-effectively scale to support the voracious connectivity demand growth that continues unabated. Without submarine cables, which are about the size of a common garden hose, there simply is no World Wide Web. Out of sight and out of mind, submarine cables are used by Internet users, man and machine, every single day. These cables are critical infrastructure and will continue to be the jugular veins of intercontinental connectivity for decades to come.”

"Without submarine cables, which are about the size of a common garden hose, there simply is no World Wide Web."- Brian Lavallée, Senior Director, Portfolio Marketing and Submarine Industry expert 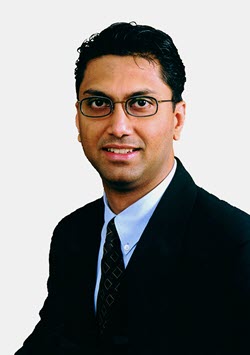 “When the World Wide Web emerged, Asia Pacific had an average of less than five telephone lines per one hundred people. In many parts of Asia Pacific today, the teledensity is greater than 100 percent, meaning many people have more than one telephone line each! The WWW, its derivative applications and the correspondent digital economic transformation, have played a key role in getting us to where we are today – a very stark contrast to 30 years ago.

Except in science fiction, it was difficult to imagine scenarios such as grandparents giving their grandchildren virtual “ang-pows” via mobile applications, or that facial recognition would be trivially used in buying groceries. In fact, by most measures, we’re really only at the very beginning. Technologies such as AI, AR, real-time language translation, self-driving cars are all concepts that originated on the WWW and are now poised to completely transform our everyday lives.”

White Paper
The Future of Coherent Optical Networking
“When I look back to 1989 when the World Wide Web was first created and other “firsts” of this era, I’m struck by two significant milestones- the first SMS text message sent in 1992, and Amazon's inception in 1994. The World Wide Web has had a profound effect on society as we know it today, but equally without our network of undersea communication, there would be no World Wide Web, mobile communication would be very limited to national networks and Amazon might only be a retailer of books instead of one of the largest data center and global e-commerce companies.” 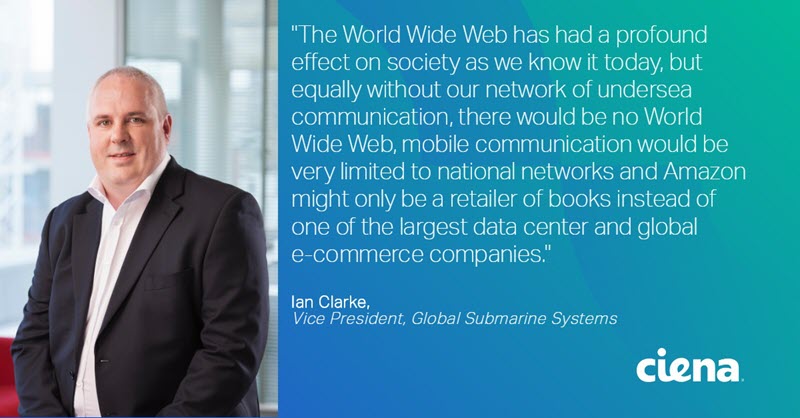 “The World Wide Web turns 30 this year. I often sit in amazement of how what started as an academic project has completely transformed most of modern society in ways we could never have imagined. While the World Wide Web has been a driving force in the creation of knowledge, wealth, technological advancements, and societal change, not all of it has been for the better. Thirty years ago, no one worried about massive personally identifiable information (PII) breaches, the loss of billions of dollars in real and digital wealth through security breaches, or your baby monitor and doorbell spying on you.

It strikes me that as far as we have come in so many ways, we have learned so little about securing the internet and the connected services. Yes, we have multi-factor authentication (MFA), password managers and encryption but we really need to ask ourselves, why do we need them? We as InfoSec professionals fail to account for human nature, bolting on security solutions and hoping that people will do the “right” thing, whatever that is at the moment.

"In the next 30 years, we need to change the fundamental approach to security. We need to consider architectures and solutions that build security into the fabric of the infrastructure and move away from static designs that are slow to recognize and adapt to threats." - Jim Carnes, Chief Security Architect

In the next 30 years, we need to change the fundamental approach to security. We need to consider architectures and solutions that build security into the fabric of the infrastructure and move away from static designs that are slow to recognize and adapt to threats. We need fewer bolt-on products and more real-time, information-driven networks that stop threats before they reach their destination.

Ciena’s Adaptive NetworkTM is moving in that direction. Imagine a network that has context; one that is instrumented to be aware of who and what is on the network, that can recognize a threat as it enters the network and adapts to thwart those threats. Imagine a network that no longer needs users or endpoints to do the “right” thing.  The network of the future is an Adaptive Network that protects itself and everything on it. The last 30 years have been amazing, the next 30 will be as well.”