Brian Lavallée
Senior Director, Solutions Marketing
Subscribe Subscribe to Ciena's communications
While today's subsea cable networks are experiencing a technological revolution, they’re not a new phenomenon by any means. In fact, this week is the 150-year anniversary of the first reliable trans-Atlantic telegraph cable that was put into service way back in 1866. You’re not hallucinating; it was indeed a century and a half ago! The 1866 submarine cable snaked along the Atlantic Ocean seabed to connect Telegraph Field at Foilhommerum Bay on Valentia Island (Ireland) to Heart's Content in Newfoundland (now part of Canada). Brian Lavallée tells the story of that first subsea cable across the Atlantic in this blog post.

As mentioned in a previous blog, undersea cable networks deployed around the world carry close to 100% of all intercontinental communications traffic, but they’re not a new phenomenon by any means. In fact, this week is the 150-year anniversary of the first reliable trans-Atlantic telegraph cable that was put into service way back in 1866. You’re not hallucinating; it was indeed a century and a half ago!

The 1866 submarine cable snaked along the Atlantic Ocean seabed to connect Telegraph Field at Foilhommerum Bay on Valentia Island (Ireland) to Heart's Content in Newfoundland (now part of Canada). The 1866 cable wasn’t actually the first trans-Atlantic submarine cable though; it was the fourth attempt, though the first which was successful, after multiple failed attempts in 1857, 1858, and 1865. If at first you don’t succeed, try, try, and try again -- and they did.

The first message successfully sent across a trans-Atlantic cable occurred on August 16, 1858 and ushered in an era of drastically reduced communication times. Before submarine telegraph cables, the speed of trans-Atlantic communication was the speed of the fastest ship that carried a handwritten message between North America and Europe, which took about a week and often much longer due to the notoriously bad weather and rough seas of the North Atlantic. The 1858 trans-Atlantic telegraph cable allowed for (short) messages and responses to be received in the same day – 19th century instant messaging. Although modern submarine cables dwarf the transmission performance of the first submarine telegraph cables, the latter was still an impressive feat nonetheless and laid the foundation for mankind’s biggest engineering feat ever – the global Internet.

Over 150 years ago, several visionaries dreamt of telegraph cables connecting the New World to the Old World across the vast expanse of the Atlantic Ocean. As Steve Jobs once said, “the people who are crazy enough to think they can change the world are the ones who do”, and this was also the case back in the 1850s – dream big or go home! The Atlantic Telegraph Company was the muscle behind the construction of the first transatlantic telegraph cable, which began in 1854 and was completed a few years later in 1858. Unfortunately, the cable worked for just three weeks before catastrophically failing, but was an impressive feat that provided invaluable experience, knowledge, anger, pain, and sorrow, all of which were leveraged in the next cable attempt.

Before the premature death of the 1858 cable, it did send the first telegram across the Atlantic Ocean on August 16 stating “Glory to God in the highest, on earth peace and good will to all men”. Queen Victoria later sent a message to American President James Buchanan stating “an additional link between the nations whose friendship is founded on their common interest and reciprocal esteem" to which Buchanan responded, “it is a triumph more glorious, because far more useful to mankind, than was ever won by conqueror on the field of battle. May the Atlantic telegraph, under the blessing of Heaven, prove to be a bond of perpetual peace and friendship between the kindred nations, and an instrument destined by Divine Providence to diffuse religion, civilization, liberty, and law throughout the world". They weren’t exactly the typical “Yo! Wazzup!?!” text messages of today, but they were precursors to today’s long distance social media messages.

It should be noted these transmitted telegrams were very hard to decipher. For instance, a 98-word message sent from Queen Victoria took sixteen hours to send. This speed would be simply incompatible with today’s neurotic need to communicate instantly (or faster), but 150 years ago it was “near instant” when compared to waiting for a ship to arrive with your handwritten message, and then you had to send your response back!

As (very bad) luck would have it, signal quality on the new 1858 cable started to quickly degrade resulting in a transmission speed that rendered the new submarine cable essentially unusable. In an attempt to speed up the transmission performance, the cable’s chief electrician, Wildman Whitehouse, applied thousands of volts to the cable causing its insulation to fail, and the submarine cable was destroyed. How would you like to be in his shoes back then? This was likely the very first miserable day in the life of a submarine network engineer, or in case of Whitehouse, a self-taught electrician. The incident led to an 1861 public enquiry, which eventually concluded that Whitehouse bear majority responsibility for the untimely death of the 1858 submarine cable, although it’s also been argued that the manufacturing, storage, and handling of the 1858 submarine cable would have led to a premature failure anyway. Regardless, it must have been a miserable day for Wildman!

Successful entrepreneurs never quit, as evidenced by the multiple attempts over a nine-year period from 1857 to 1866, which culminated in finally achieving a reliable trans-Atlantic cable that ushered in the era of transoceanic communications. The success of the 1866 cable led to several more cables being laid between Foilhommerum Bay and Heart's Content from 1873 to 1894. By the end of the 19th century, trans-Atlantic cables owned by Britain, France, Germany, and the United States were in operation, resulting in what was essentially a “web” of submarine telegraph cables, which can perhaps be thought of as an early “Internet” based on Morse code.

The first trans-Atlantic cables were made from materials available at the time. Multiple copper wires were covered with natural latex from the sap of the gutta-percha tree and then wound with tarred hemp. Messages were sent and received by Morse code operators at each end of the cable – the human “smartphone” of the time. These cables didn’t incorporate repeaters to amplify transmitted signals along the cable because there simply wasn’t a practical way to power the submerged relays. Early submarine telegraph cables were basically very long passive patch cables laid upon the bottom of the Atlantic Ocean. Still, it was impressive for the time.

The first repeatered trans-Atlantic cable was TAT-1 deployed nearly a century later in 1956, which used such newfangled technologies as coaxial cable, polyethylene insulation instead of gutta-percha tree sap, reliable vacuum tubes in submerged repeaters instead of newly introduced (and untrusted) transistors, as well as other engineering improvements in the 1950s. TAT-1 was a submerged fossil by today’s standards, but an absolutely critical step to where we are today. What will future generations think of the submarine cables that we’re so proud and fond of today? Will today’s cables be viewed in the future the same way we view 8-track cassettes today?

Transmission speed of the 1858 cable was very slow, taking around two minutes to transmit a single character, which translates into a transmission rate of about 0.1 word/minute! The first message sent across the 1858 cable took over 17 hours to send, a messaging speed that would render today’s texting teenager catatonic. The more advanced 1866 cable used improved cable manufacturing methods and transmission technologies that increased transmission speeds to a whopping 8 words/minute, or 80 times faster than the 1858 cable. And even though transmission speed increased to only 120 words/minute by the 20th century, it enabled London to become a global telecommunications hub, and is why they’re still a primary location for landing modern submarine cables that have fuelled their data center industry. Internet Content Providers (ICP) currently drive most submarine network bandwidth growth that’s used to interconnect their many data centers. Where ICPs don’t or can’t purchase wholesale bandwidth, they’ve already built or will build their own submarine cables.

Unbeknownst to the early submarine cable visionaries back in the 1850s, they were laying the foundation that would eventually lead to today’s submarine cables becoming jugular veins of intercontinental communications. Submarine cables play a critical role in enabling the global Internet, which has unleashed significant and rapid social, economic, and political change around the world. Who knows where this near instant and borderless communications medium will take our species in the future, both good and not so good? Sit back and think about it for a minute… for the first time in the history of mankind, any human can communicate with any other human on planet Earth, at any time. If that isn’t an impressive engineering feat, I simply don’t know what is.

So, How Far Have We Actually Come?

The 1858 telegraph cable transmitted messages across the Atlantic Ocean at roughly 0.1 word/minute using the venerable Morse code. Today’s submarine cables transmit multiple terabits of data each and every second. For example, look at the Aqua Comms AEConnect submarine cable, which recently came online. This 5,522km cable connects Killala (Ireland) to Shirley (New York, US) and is capable of delivering more than 52Tbps! Let’s put this into perspective; if we assume the average English word length is 5 characters, each represented by an 8-bit ASCII code, 0.1 word/minute translates into approximately 0.067bps… my thimble runneth over. The Aqua Comms AEConnect submarine cable carries 779,999,961,000,002 times more information each and every second than the 1858 cable of 150 years ago. Granted, these calculations are rough estimates but they do illustrate the several orders of magnitude increases in transmission speed over the last century and a half. 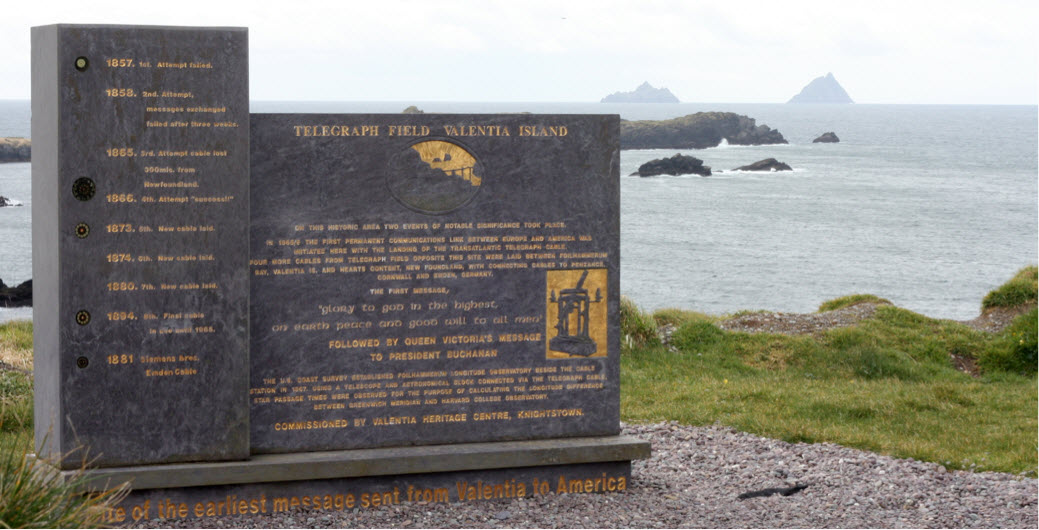 To commemorate the first trans-Atlantic messages between Queen Victoria and President James Buchanan, a memorial monument exists at Telegraph Field on Valentia Island on Foilhommerum Cliff overlooking the Atlantic Ocean that honors the history of the local telegraph industry from 1857 onwards. To celebrate the 150-year anniversary, a festival will be held from July 14 to 17 on Valentia Island with the official festival opening to take place at the monument on Wednesday, July 13. This will be followed by fun and educational activities for the entire family, as detailed in the festival program. If you’re able to attend, I highly recommend participating in this unique festival to help celebrate the glorious history of the first trans-Atlantic submarine cables that were in essence the foundation of submarine networks that enable today’s global Internet. You can even send a bunch of selfies from the event back to North America along the same trans-Atlantic corridor!

Over the past 150 years, we have indeed come a long way, baby!

Want to learn more about the Ciena’s submarine network solutions? Check out this paper.

The adoption of SDN domain controllers improves network management and should be a central element in an IT-based digital transfo ...

In this edition of the insights: Learn how broadband service providers can maximize network flexibility to adapt and capture new ...