The new capabilities, which are now commercially available on Ciena’s 6500 Packet-Optical Platform, include advanced Flexible Grid technology to pack more wavelengths along a fiber route, as well as new modulation formats, including an entirely new coherent modulation format — 8D-2QAM — specifically designed for the demands of ultra-long haul submarine networks.

Likely the most interesting new feature in Ciena’s submarine toolkit is our unique patent-pending 8D-2QAM coherent modulation format that is now available on Ciena’s 6500 platform. This 8-dimensional modulation scheme has the same spectral efficiency as BPSK but uses a unique method to reduce interactions between adjacent wavelengths and opposite polarisations of the same wavelength – called non-linear impairments.  This significantly reduces the signal degradations which occur over very long transmission distances and mitigates their impact on capacity and reach.

To date, the most suitable technology for ULH submarine applications has been BPSK, or Binary Phase Shift Keying, which Ciena's WaveLogic 3 coherent chipset already supports and has been deployed in many trans-Pacific segments today.  BPSK basically doubles the potential reach of 100G transmissions at the cost of total fiber capacity and spectral efficiency compared to other modulation formats like QPSK.  With the new 8D-2QAM modulation format, 100G link spans can extend an additional 20% over BPSK and a full 140% farther than QPSK.

In addition, because 8D-2QAM is inherently better at accommodating for legacy dispersion compensating fiber and non-linear impairments, 8D-2QAM allows for more wavelengths to be supported per fiber span compared to BPSK, creating as much as 40% additional upgrade capacity in the line.

For submarine networks where squeezing every last drop of capacity out of existing infrastructure is critical, 8D-2QAM represents a significant technology achievement.

(For more on 8D-2QAM, read this Optics Express white paper written by the Ciena engineers that helped develop the new modulation format.)

In addition to the new 8D-2QAM modulation, Ciena’s GeoMesh solution now features Flexible Grid technology. Flexible Grid is a separate feature that allows the user to set the spacing between channels, enabling optical wavelengths to be squeezed closer together, resulting in more waves deployed within the available bandwidth of the cable and its submarine repeaters.  Flexible Grid on its own enables an increase in equipped capacity of coherent 100Gb/s transmission by up to 33%.

The bonus of these two new and distinct technologies is how well they complement each other. Because the new 8D-2QAM modulation format is more resistant to “cross-talk” between adjacent wavelengths, it allows our Flexible Grid technology to work its magic in squeezing channels closer together to recover additional spectrum.

This dual-action benefit is evident in Southern Cross’ news, where the implementation of both 8D-2QAM modulation and Flexible Grid technology achieved an 85% increase in the ultimate capacity of the longest trans-Pacific segment (>8,000km) when compared to 100G BPSK. 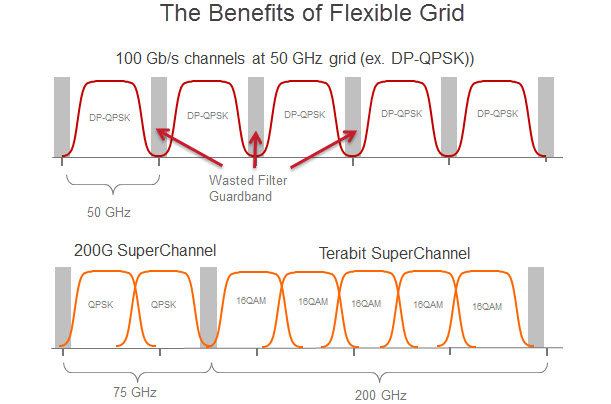 The second newly available modulation format in Ciena’s GeoMesh solution is 16QAM. Ciena’s 16QAM has been getting a lot of attention recently for its potential in metro networks due to its ability to double total line capacities when compared to QPSK (see Verizon Deploys 200G Technology on Section of Its Ultra-Long-Haul Network).

But it turns out that 16QAM modulation is just as applicable for shorter submarine spans as a great way to double the capacity per wavelength, providing 200Gb/s on a single line card, resulting in overall increased system capacity as well as benefits of reduced power, space, and cost.

With this week’s customer news from PTC’15, we believe we are the first vendor in the world to deploy 16-QAM over a production submarine network, and we have seen additional interest from other submarine network operators in this modulation format as well.

The Advent of Open Submarine Networks