March 1, 2019
Subscribe Subscribe to Ciena's communications
At OFC 2019 Ciena’s Kim Roberts was presented with the John Tyndall Award. In an article from Gazettabyte, Roy Rubenstein takes an in-depth look at the career and talents of this networking industry pioneer.
White Paper
The Future of Coherent Optical Networking
Kim Roberts, Ciena’s Vice President of WaveLogic Science, was presented with the Optical Society (OSA) and the IEEE Photonics Society’s 2019 John Tyndall Award at OFC 2019. Roberts is recognized “for pioneering contributions to the development of practical coherent communication systems.” 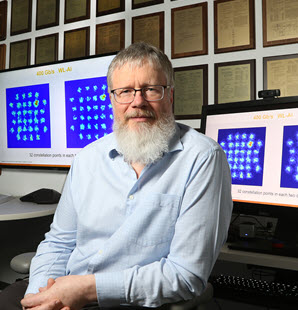 When it was announced he was the recipient of this award, Elizabeth Rogan, CEO of The Optical Society said “Kim Roberts’ innovations are widely recognized to have transformed optical transmission systems. His work was key to providing a new level of technical solutions in our daily communications needs.”

The award, one of the top honors in the fiber optics community, is named for John Tyndall, a 19th century scientist who was the first to demonstrate the phenomenon of total internal reflection. It recognizes an individual who has made pioneering, highly significant, or continuing technical or leadership contributions to fiber optic technology.

Below is an excerpt of an in-depth profile of Kim Roberts by Gazettabyte. Click here for the full article.

A conceptualiser, mathematician, furniture maker, prolific inventor, sushi lover, creative spirit, team leader and mentor. These are just some of the descriptors applied to Kim Roberts of Ciena by the people that know him.

Kim Roberts of Ciena. On the wall are some of his 160 patents while on the screen is an image of a 32-point constellation produced by the WaveLogic Ai coherent modem. Source: Ciena.

Roberts has been awarded the 2019 John Tyndall Award by The Optical Society (OSA) and the IEEE Photonics Society in recognition of his “pioneering contributions to the development of practical coherent communication systems”.

“It is well deserved,” says Seb Savory, who first knew Roberts when they both worked at Nortel and who is now an academic at the University of Cambridge working on joint projects with Ciena. Ciena acquired Nortel in 2010.

“The best measure of Kim’s contributions and impact is the simple fact that the practical coherent optical communication systems that Kim pioneered are now the gold standard for high-capacity fiber-optic systems,” says Steve Alexander, Ciena’s CTO. “They have become the foundation of the fabric for how the world connects, having been deployed by nearly every large network operator on the planet.”

“Roberts was among the very first who introduced electronic signal processing in optical communications," says Professor Ioannis Tomkos at the Athens Information Technology Center (AIT). Initially, the signal processing was at the transmitter - electronic-based equalisation for pre-compensation in direct-detection systems - and then at the receiver. “Roberts’s ideas have made coherent detection practical and revolutionised the industry,” says Tomkos.

Meanwhile, his boss, Dino DiPerna, vice president, packet optical platforms R&D at Ciena, describes Roberts as having one of the most brilliant minds he has encountered.

Visit Gazettabyte to read the rest of the article: “Kim Roberts: The 2019 John Tyndall Award winner.”

Ciena unveils WaveLogic 5: 800G and so much more

Articles
How bold hardware and software innovations are ch ...

Articles
The Journey to 800G and Beyond

This blog originally appeared on Zayo's website. The road to innovation begins with a map. Sometimes it’s figurative — a roadmap ...

Enterprise customers across multiple industry sectors are realizing that network transformation is a foundational requirement to ...

What are network providers thinking about IP/Optical Convergence? Representatives from Microsoft, Telia Carrier and Cox Communica ...