While Raman amplification isn’t a hot topic today, you’re likely to start hearing about it more often.  That’s because the move to 400G and Terabit capacities using coherent technologies like 16QAM will make Raman a more important part of keeping transmission and regeneration costs down.

Ciena has recently introduced an innovative new Raman solution that eliminates the pain points of previous Raman products and even adds new capabilities and features.

Last week when Ciena and Comcast detailed a 1 Terabit transmission across a link of almost 1,000km across Comcast’s live production network, one of the key enabling technologies to achieve that distance in a real-world scenario was something that we called “Smart Raman” amplification.

While Raman amplification isn’t a hot topic today, you’re likely to start hearing about it more often.  That’s because the move to 400G and Terabit capacities using coherent technologies like 16QAM will make Raman a more important part of keeping transmission and regeneration costs down.

The pain of traditional Raman Amplification

Raman amplification is by no means new to the optical market – research and productization of Raman amplifiers began in the 1970s.  But for the most part, Raman amplification has played a secondary role to the more popular technique of EDFA amplification, even though Raman can provide improved OSNR (optical signal-to-noise ratio) and thus a longer unregenerated transmission distance. 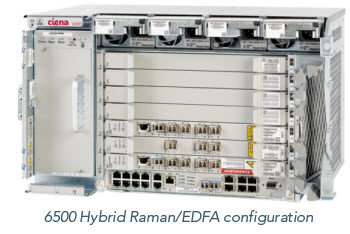 The reason?  Typically, many operators have shied away from using Raman because it was more operationally challenging to deploy.  The high power emanating from the module and the fact that Raman uses the fiber plant as the gain medium create challenges for turn-up and troubleshooting new optical connections as well as for future fiber maintenance.

For example, the criteria for fiber connector cleanliness and splice quality is more stringent for Raman than what is required for EDFA-only solutions.  These are not minor issues, as turning up a high-power Raman amplifier across a fiber span that has a dirty connector or inadequate splice quality can result in damage to the fiber plant.

Distance at a premium

Even with these pain points, Raman amplification is gaining in popularity among network operators.  At the root of the demand are two familiar drivers: the unending need for more bandwidth and the need to contain costs.

The pending move to 400G and Terabit capacities will leverage a new coherent modulation format called 16QAM.  What 16QAM gives you in bandwidth and spectral efficiency, it takes away in transmission distance.  That’s why you generally hear people talk about 16QAM as a metro transmission technology.

Regenerating expensive 400G/Terabit wavelengths at metro distances would be prohibitively expensive. But clearly 400G and Terabit capacity will be needed in regional and long haul networks.    That’s where the benefits from Raman amplification come in, and where Ciena’s new Raman solution has eliminated some of the pain.

A new generation of Raman amplification

Without much fanfare, Ciena has recently introduced an innovative new Raman solution that eliminates the pain points of previous products.  You can call it Smart Raman, Plug-and-Play Raman, or Next-Gen Raman, but the result is a Raman solution that not only eliminates previous operational challenges, but even adds new capabilities and features.

During turn-up of a new amplified line system, Ciena’s integrated OTDR provides a quick and controlled activation by autonomously testing the fiber plant to detect unacceptable connector and fiber conditions before the Raman amplifier is allowed to turn on. This controlled turn-up process prevents equipment and fiber damage which could cause additional deployment costs and delay.

The integrated OTDR is also valuable for the purpose of rapid, remote fault isolation, eliminating the need for expensive, dedicated testing devices and site visits. In the event of a fiber cut, the system will automatically initiate a trace using the OTDR, which can help identify the precise location of the fault in just seconds.  OTDR traces can also be compared over time, enabling pre- and post-fault traces to be compared to ensure the fiber has been repaired properly. 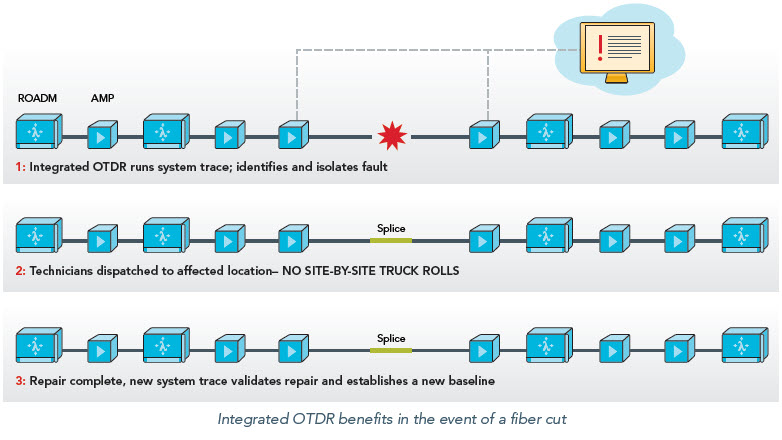 To pair with our new Raman solution, Ciena has also developed a new programmable EDFA circuit pack, called the XLA, that can be remotely configured to switch between two gain modes (high or low).  With the combination of Ciena’s new Raman and XLA, operators are able to maximize system performance and increase reach by 25-40%.  That distance can be the difference between requiring a signal regeneration or not.  And just as important, operators can achieve this “gain” while eliminating the pain of prior Raman solutions.

eBooks
The Essential Guide to Countering High OPEX and C ...