June 22, 2017
Subscribe Subscribe to Ciena's communications
Carrier Ethernet innovation is moving at an impressive pace. Between the various industry groups and standards bodies, as well as multiple concurrent standards efforts, it’s often hard to keep up. To make sense of it all, here is an overview of the speeds, standards and services associated with Carrier Ethernet.

For decades, Ethernet has been the technology that runs Local Area Networks (LANs). Those cables snake everywhere through companies and carriers today. With its ubiquity and popularity continuing to drive down the price of components, the economic advantages and market acceptance of Ethernet will likely continue for some time.

Carrier Ethernet (CE) builds on all the advantages of Ethernet by providing a flexible framework, universal frame format, simple design, and enhanced Operations, Administration, and Maintenance (OAM) capabilities for high-performance networks ideally suited for both enterprises and carriers. And like Ethernet, the growing adoption of Carrier Ethernet is changing how networks are built.

In fact, innovation with Carrier Ethernet is moving at an impressive pace. Between the various industry groups and standards bodies, as well as multiple concurrent standards efforts, it’s often hard to keep up. To make sense of it all, in this post I’ll give you an overview of the speeds, standards and services associated with Carrier Ethernet. So, here we go. 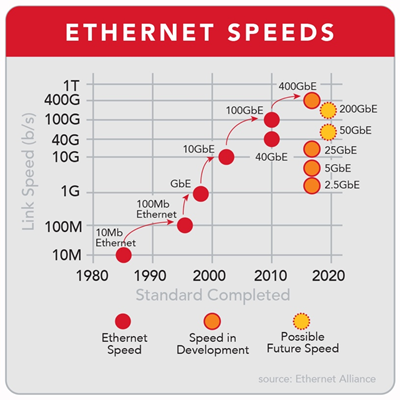 This chart from the Ethernet Alliance illustrates the growth in Ethernet speeds as defined by the Institute of Electrical and Electronics Engineers (IEEE) from the mid-‘80s and into the future. It’s quite a growth path, isn’t it?

The leap to Gigabit Ethernet (and it was a LEAP!) is a fond memory of a quaint time before the turn of the century. 400Gb/s Ethernet is nearly here and there appears to be no end in sight to further speed enhancements.

But there is a new trend in the evolution of Ethernet where new data rates are envisioned that support specific applications, instead of the habitual 10x rate leap we’ve seen in the past. The 2.5Gb/s rate, for instance, is envisioned specifically to address connecting WiFi access points capable of more than 1Gb/s but nowhere near 10Gb/s. Since cost is of paramount concern in this environment, this rate makes a lot of sense for enterprises and real-estate tenants/landlords. Similarly 5Gb/s and 25Gb/s find specific applications in the data center environment. Interestingly, the Ethernet Alliance chart does not show the next logical 10x rate (1Tb/s) given some technical challenges that will probably push it out beyond the chart’s time horizon, but rest assured, with bit rates in the hundreds of Gb/s and extensions to the standard continuously under development the increasing Ethernet speeds won’t abate any time soon.

Alongside the work of the IEEE the MEF has been advancing the definition of Carrier Ethernet services since 2001. The early definitions (think E-Line, E-LAN, E-Tree) are now ubiquitous in most service provider service menus. A bit later, wholesale services E-Access and E-Transit were introduced to allow service providers to stitch together end-to-end services using multi-operator networks. Looking to the future, MEF has introduced it’s Lifecycle Services Orchestration framework to allow a myriad of connectivity services in addition to Ethernet proper (think IP, optical, L4+) and value added services (think Security) on top of those. Again, the innovations won’t abate any time soon. 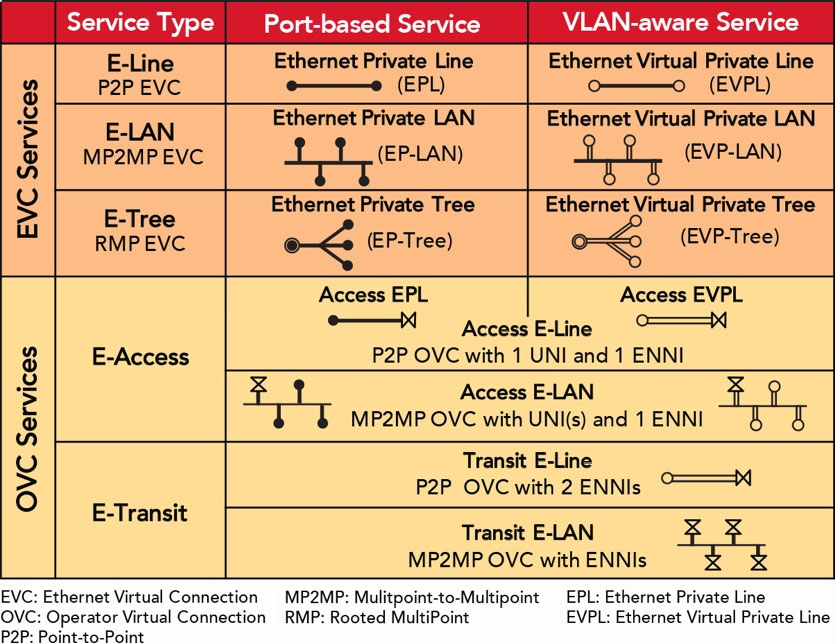 How about CE standards?

CE has many standards and terms defined by the MEF as a set of building blocks that are then used to assemble a variety of CE services. By using these building blocks, service providers can construct a rich set of CE services that can be understood by buyers and sellers alike using consistent and standardized nomenclature.

Operations, Administration, and Maintenance (OAM) functionality is a hallmark of the legacy TDM-based services that CE has increasingly replaced in the modern network. As a result, Ethernet OAM is required to match those capabilities to provide visibility and assurance to the correct function and services performance. These are critical for delivering on the service management attribute of CE. This is especially important because Ethernet services traversing the WAN can span hundreds to thousands of kilometers.

A rich OAM toolkit has recently been added to the Ethernet protocol standards to allow for OAM functions that provide fault and performance management tools, which were not part of the original LAN technology. I’ve outlined several important new OAM functions in this chart.

There are a few other areas to watch in the Ethernet realm over the next few years, including:

So the Ethernet journey continues. Carrier Ethernet will continue to play an important role as a flexible, scalable extension of the LAN. The next few years should bring exciting developments as the speeds, standards and services evolve alongside the needs of enterprises and service providers. Watch this space.