Connecting to space, the final frontier

Brian Lavallée
Senior Director, Solutions Marketing
Subscribe Subscribe to Ciena's communications
What are Low-Earth Orbit (LEO) satellite networks and how will they help to provide connectivity to new areas? Ciena’s Brian Lavallée explains and takes a look at how satellite network operator Telesat is doing just that.

Over the past year, there’s been a lot of attention, and rightfully so, related  to several new Low-Earth Orbit (LEO) satellite constellation announcements from multiple network operators such as Telesat’s Lightspeed, SpaceX’s Starlink, and Amazon’s Project Kuiper. These space-based networks leverage new satellites, many more of them when compared to traditional satellite networks, orbiting much closer to earth. The combination of new satellite transmission technology coupled with many more satellites orbiting much closer to the Earth’s surface, enables game-changing aggregate capacities at much lower latency.

LEO networks are mostly complementary to existing terrestrial and cellular networks when providing high-performance connectivity to traditionally underserved end-users, both humans and machines. The main targeted end-users are people in geographic areas, such as rural communities, that are underserved by wireline (broadband) and/or wireless (cellular) connectivity. Targeted end-users can also be machines like cell towers in areas not adequately served by wireless (microwave) or wireline (fiber) backhaul networks, offshore oil rigs, as well as ships, airplanes, and trains travelling beyond fiber or wireless network coverage.

Most LEO satellite network operators will target, at least initially, geographic areas where existing wireless and wireline network coverage and/or performance is lacking. Targeting these areas will help address the Digital Divide by allowing more communities to enjoy what’s become a human right – reliable and affordable high-speed internet access regardless of where one lives, works, and plays.

Telesat is a satellite network operator and true industry pioneer established by the Canadian Parliament back in 1969 as a commercial company with a mandate to provide satellite communication services across Canada, the 2nd largest country on Earth by size. Soon after  in 1972, Telesat launched Anik A1, shown in Figure 1, using a McDonell Douglas (now Boeing) Delta 1000 rocket system on November 9, 1972 – almost 50 years ago! It was the world’s first domestic communications satellite placed in a Geostationary Earth Orbit (GEO). Their pioneering efforts continued and by 1978, Telesat had launched the first commercial Ku-band satellite offering the first Direct-to-Home (DTH) television service laying the groundwork for the global DTH industry.

In addition to their existing state-of-the-art global GEO satellite network, Telesat is planning a new LEO satellite network, which will leverage their impressive experience in space-based connectivity that spans over half a century. Their planned LEO network is being designed to best address the rigorous requirements of telecom, government, maritime, and aeronautical customers.

Telesat’s first LEO satellite was launched in January 2018 to demonstrate key features of their LEO system design. In particular, it demonstrated the capability of the satellite and customer ground-based terminals to deliver a low-latency broadband experience that (Medium Earth Orbit) MEO and GEO satellites cannot provide. A summary of the benefits of Telesat’s new LEO satellite is summarized in Figure 2. 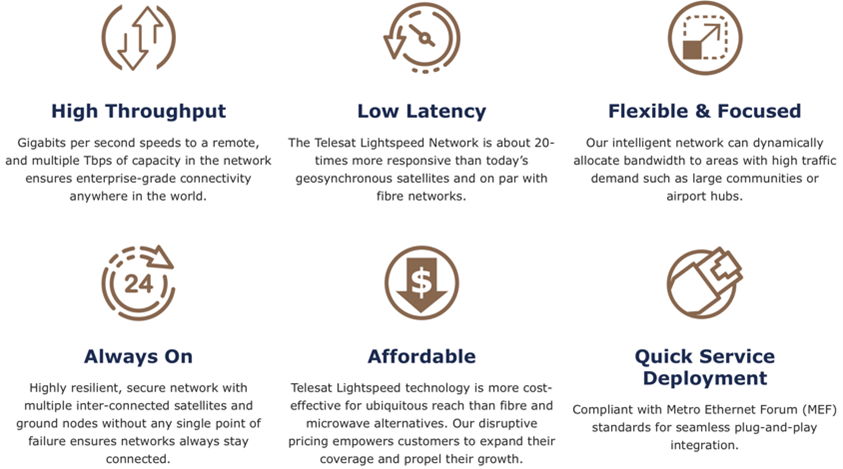 Given the impressive pedigree, history, and experience in the satellite networking space, it’s no surprise that in 2024, Telesat projects to commercially launch Telesat Lightspeed, initially comprised of 298 satellites, as shown in Figure 3. Telesat’s goal is to shrink the Digital Divide, create hundreds of new high-quality jobs in Canada, spur domestic investment and exports, and ensure Canada is at the forefront of the new and rapidly-growing space economy.

As Telesat works towards a 2024 commercial launch, they’re already modernizing their terrestrial backhaul networks to provide high-speed, high-capacity network connectivity to governments, telcos, mobile network operators, and other enterprise customers for improved delivery of 5G, cloud computing, video streaming, and other bandwidth-intensive broadband services. Upgrading their terrestrial networks today will allow Telesat not only to improve their service offerings to existing customers but also to proactively prepare for the impressive leap in network performance to be provided by their new Telesat Lightspeed network. To help with these two critical business goals, Telesat announced that it selected Ciena to provide services at its expansive Points-of-Presence (PoPs) and terrestrial connectivity to almost 50 Earth-based landing stations.