Great Gap in Demand for Good Connectivity and Network Quality Among Gamers in Japan: Ciena “Online Gaming in Asia” Survey

Ciena (NYSE: CIEN) on November 18 released results from its “Online Gaming in Asia” Survey. The survey showed that there is a great gap in the demand for network quality in Japan, depending on the amount of time spent playing video games.

The survey was conducted with respondents in Japan who are over 18 years old, and looked into the factors that affects their experiences when playing video games. The survey categorized the respondents into three segments: “heavy gamers”, who are defined as those who played video games for 14 hours or more per week; “light gamers”, who are those that played less than 14 hours per week; and non-gamers, which are those who do not play video games. 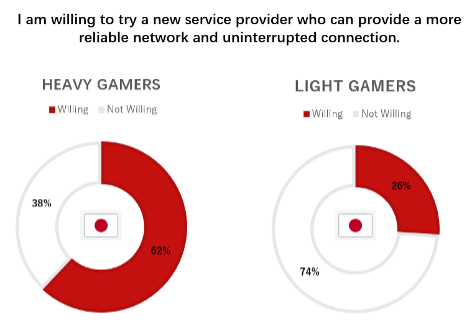 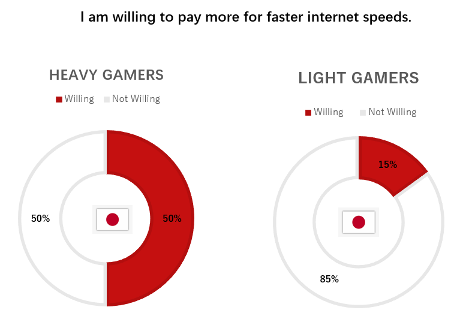 Interestingly, 35% of all gamers indicated that a comfortable setting (i.e., chair, couch, table) is an important criterion for a satisfying gaming session. Similarly, a pleasant room temperature with air conditioning or heating is also important for Japanese consumers (31%). Other important factors while gaming include an organized setup (12%), ergonomic gaming gear (11%), and personal space (7%).

“While there are differences in attitudes towards network quality and connectivity between gamers who spend different amounts of time playing video games, close to half (47%) of all Japanese gamers certainly acknowledge that stable and reliable internet connection makes gaming more fun and enjoyable overall,” With millions of gamers live-streaming every day and milliseconds meaning the difference between victory and defeat, networks need to adapt to unpredictable bandwidth demands and be future ready. For this reason, it is critically important that we construct networks to embrace next-generation metro and edge architectures that are closer to the end user”

Note to editors
Ciena commissioned independent survey firm YouGov to conduct a survey of 1011 adults in Japan between 2nd - 6th August 2021. The figures have been weighted and are representative of all Japanese adults (aged 18+).

About Ciena
Ciena (NYSE: CIEN) is a networking systems, services and software company. We provide solutions that help our customers create the Adaptive NetworkTM in response to the constantly changing demands of their end-users. By delivering best-in-class networking technology through high-touch consultative relationships, we build the world’s most agile networks with automation, openness and scale. For updates on Ciena, follow us on Twitter @Ciena, LinkedIn, the Ciena Insights blog, or visit www.ciena.com.

Note to Ciena Investors
You are encouraged to review the Investors section of our website, where we routinely post press releases, SEC filings, recent news, financial results, and other announcements. From time to time we exclusively post material information to this website along with other disclosure channels that we use. This press release contains certain forward-looking statements that are based on our current expectations, forecasts, information and assumptions. These statements involve inherent risks and uncertainties.  Actual results or outcomes may differ materially from those stated or implied, because of risks and uncertainties, including those detailed in our most recent annual and quarterly reports filed with the SEC. Forward-looking statements include statements regarding our  expectations, beliefs, intentions or strategies and can be identified by words such as "anticipate," "believe," "could," "estimate," "expect," "intend," "may," "should," "will," and "would" or similar words. Ciena assumes no obligation to update the information included in this press release, whether as a result of new information, future events or otherwise.

Articles
Managed Services and the art of making molehills ...

Managing your network can quickly become a mountain of effort and resources. Ciena’s Tim Wilson looks at a way to reframe the dis ...