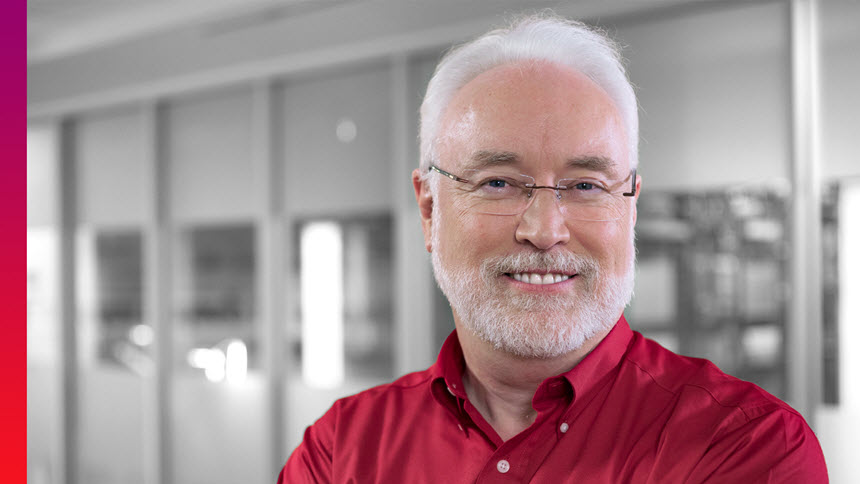 He’s head of technology for Ciena, but Stephen Alexander says the company focuses more on people—both members of the Ciena team and the customers they serve—than product.

“Over the years, we’ve become more and more about the people who our technology touches,” he says. “We’re fact-based and analysis-based, sure. But we’re also relationship-based and customer-oriented.”

The Ciena story, says its Chief Technology Officer, is about creating the capacity and the connections that enable people to communicate.

“Communication is good for people and good for society. At Ciena, one of our specialties is making network capacity abundant. That makes everyone’s communication experience better.”

When asked to describe Ciena’s role in the telecom landscape, he compares it to the circulatory system delivering nutrients throughout the human body. “At a high level, we make the internet experience richer; we make it go faster and make it go farther.”

His advice for customers? Pay attention to the optical layer, which is the foundation of any network, and the place where capacity is created.

“It’s like the foundation of a house,” he says. “If you don’t get that part right, it won’t last very long; you are constantly patching things, and ultimately it falls apart.”

As a hiring rule, Steve starts with the principle of “always hire people smarter than you.”

“I look for education and/or experience, combined with curiosity and imagination. That’s what I think makes a good engineer.”

And he looks for people suited to the Ciena culture, which emphasizes creativity and teamwork, along with healthy doses of empathy and humility. “Prima donnas don’t do well here,” he says. “You have to be able to collaborate, and to love debating ideas back and forth at the whiteboard.”

Steve earned his bachelor’s and master’s degrees in Electrical Engineering from the Georgia Institute of Technology.

He honed his skills and launched his career at MIT’s Lincoln Laboratory, which develops advanced technologies for the U.S. Department of Defense.

In 1994 he joined Ciena, a start-up at the time, as one of its first employees. Before rising to CTO, Steve managed teams in a variety of areas at Ciena, including Transport and Switching, Data Networking, and Lightwave Systems.

Now he sits on the board of several prominent telecom groups and has won several industry honors, including the IEEE Communications Society Industrial Innovation Award.

When he’s not at Ciena, Steve, who worked in high school at a TV and radio repair shop, enjoys things that get him outside and working with his hands.

“My family is part owner of a farm on Maryland’s Eastern Shore, where we can get away from the city and day-to-day routine. Plowing a field, maintaining a tractor, planting a crop are each so different from optical communication technology that I find them all rejuvenating. Fixing things is fun! Cars, boats, barns, houses, furniture, all fall into a category of the more you use them, the more you get to fix them.”

“The way I describe my job is this: Technology, talking, traveling, trouble-shooting, and the occasional tantrum.”

He and his team are problem solvers first. “We’re engineers and scientists who are always looking for solutions,” he says. “You keep working on a problem and no matter how hard that problem is, once it is solved, you will ultimately be rewarded. That’s our objective.”