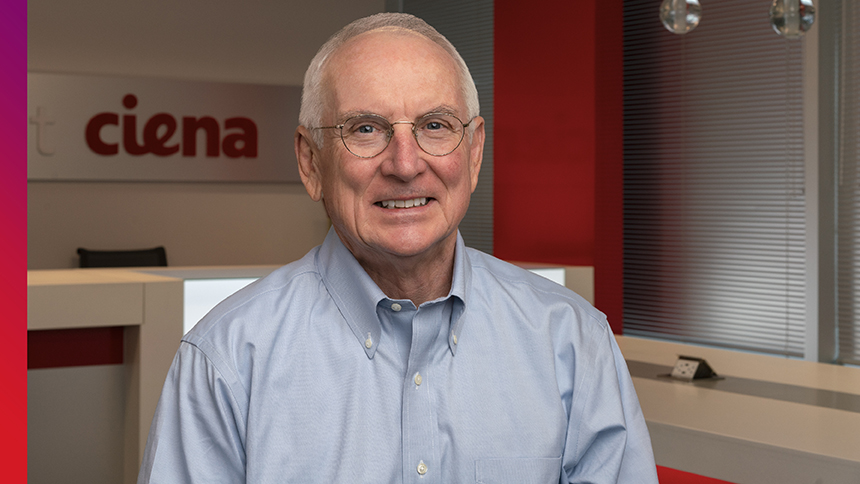 Ciena CFO Jim Moylan says he’s motivated most by being able to contribute to the company’s strategic responses to a rapidly changing market, and by Ciena’s proven potential for profitable growth.

As the top finance executive of a company that leverages its technology and investment capacity to offer the most compelling portfolio in the networking space, Jim is enthusiastic about Ciena’s rise to the top of a highly competitive market.

The industry has changed at a “dizzying rate that has been fascinating to watch,” he says. All that change demands constant re-thinking about which strategic and portfolio choices will allow Ciena to continue to keep adding customers—and stay ahead of the competition.

After more than a dozen years as Ciena’s Chief Financial Officer, Jim has learned that “It’s not just about making choices; it is just as much about putting the choices into operation.” he says. “Zeroing in on the best choice, then implementing it effectively, makes for good outcomes.”

Jim prides himself on Ciena’s ability to keep pace with industry-wide changes that affect customers, competitors, and the way networks are built.  “It never stops, which is what makes it fun,” he says.

When he’s not working, Jim enjoys a daily walk around his neighborhood, playing golf, and reading biographies and detective fiction. He describes himself as “an occasional gardener” with a gift for growing spicy green peppers. Dad to three grown daughters, Jim and his wife both relish time spent with family, especially with their seven grandchildren.

Jim, who spent much of his career in the energy industry, says he was drawn to Ciena by its people. “Ciena people share three attributes: they are bright, they want to do the right thing, and they care about the customer and the company,” he says. “People seldom leave Ciena.”

Crucial to that is a willingness among staff to rely upon each other. Members of the leadership team know their strengths, Jim says, and they know to head straight for a colleague when they’re faced with questions outside their wheelhouse.

Humility, and with it an eagerness to learn from mistakes, is valued at Ciena for employees at all levels. That aspect of the company dovetails with a quote from Napoleon Bonaparte that Jim—a collector of quotable lines—says is one of his favorites: “I have so often been mistaken that I no longer blush for it.”

Before joining Ciena in 2007, Jim served as CFO for Swett & Crawford and PRG-Schultz International. He also held key roles at Georgia-Pacific Corp., SCI Systems, Inc., and Sonat, Inc. He holds a degree in industrial engineering from the Georgia Institute of Technology and an MBA from Harvard University.

Jim credits early mentors with teaching him the importance of the right kinds of communication with colleagues at all levels. “When speaking with people, you should be mindful of the audience and what information they want to know.  Sometimes there is an inclination to tell people more than they need because you want them to realize that you are in command of the subject,” he says. “But much more important is to tell them what they need to know first.  They will ask if they want to know more.”

What matters, he says, is focusing on issues that are important, figuring out how to address them, then sharing solutions with people who can help put them into action.

“No interesting business decision is a no-brainer; they are all complicated,” he says. “It’s why we look at every decision from every angle.  And it’s why we have made a lot of good decisions over a long period of time.”