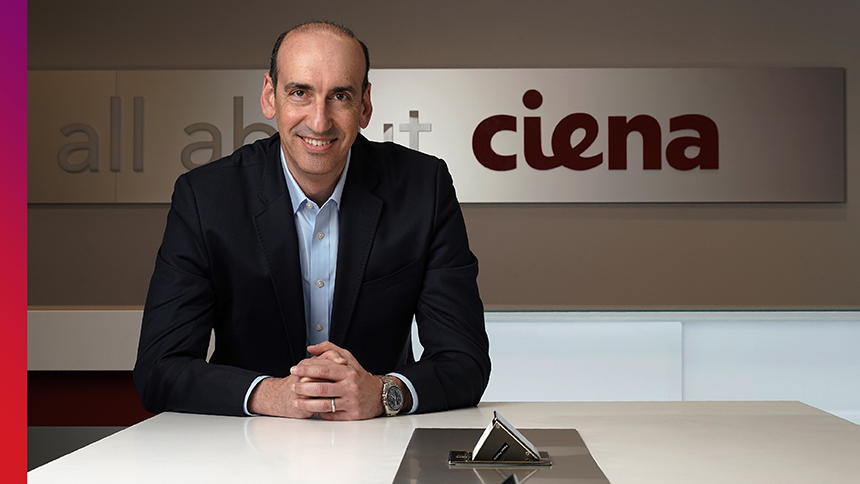 “I wear many hats,” says David, who during his Ciena tenure has also led both the human resources and the strategy and corporate development teams on an interim basis.

His primary concern is protecting Ciena against risks while also helping the company achieve its business objectives -- a balancing act David is well-suited for.

“By virtue of my position, I’m exposed to a wide range of challenges and a wide variety of people on a day-to-day basis,” he says. “No two days are the same, which is why I’m still jazzed about coming to work after twenty years.”

David joined Ciena in 2001 after practicing at the law firm of Paley Rothman, where he specialized in corporate, employment and technology law, and business litigation.

“I was recruited by Ciena before I knew what optical networking was,” he says of joining the telecommunications trailblazer that’s constantly building on its technology and investment opportunities.

The career path Ciena has taken him on, he says, has been an exciting one.

“We’ve done extremely well; our technology and people continue to give us a competitive advantage over everyone else in both the general market and in our sector. Our biggest challenge now is to keep raising the bar and continue to do what we’ve been doing in an increasingly complicated world.”

David is impressed by the level of loyalty and commitment he sees among members of the Ciena family and describes the company culture as mainly relationship-based, which “almost feels like a throw-back.”

“Ciena is very much rooted in relationships,” he says. “The people who get that are the ones who succeed here.”

He’s proud and passionate about his mentoring efforts, and happy to report that several former members of his legal department have served or are serving as general counsels for other organizations.

“I’ve been blessed in my career, and I believe it’s part of my job to help develop other people into leaders.”

When hiring, he looks for people with emotional intelligence, strong interpersonal skills, authenticity, and integrity.

He pushes members of his staff outside their comfort zones, he says, and keeps his expectations for them high. When they deliver on those expectations, which they usually do, he rewards them with the autonomy to pursue new challenges and responsibilities.

A self-described Type-A personality, David tries to spend his downtime unwinding with family. Exercising, walking his dog, and playing tennis and golf are pastimes he enjoys. He’s also a crossword aficionado who’s completed every New York Times Sunday puzzle since 2008.

“The way I see it, the day you stop learning is the day you’re done,” he says. “My plan is to continue to learn and continue to grow and to keep doing work that interests me, with people who motivate me.”

His plan for Ciena? “I want us to continue driving the business forward, delivering the best value for our customers, our partners, our employees, and our shareholders,” he says. “That’s the name of the game.”